I Had A Weird Dream About Baltimore 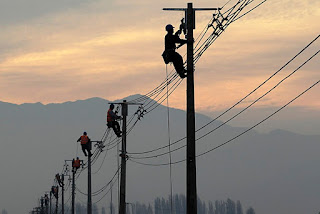 I just had a weird dream about moving to Baltimore.

I was wandering around an unknown dream city that I knew to be Baltimore, just kind of going with the flow of evening foot traffic, and started walking up these old steps. The steps sort of ended at a wall you could walk along the top of, and the wall sort of ended at a ledge you could scoot along while hanging from, and the ledge ended at a corner with power lines attached.

I looked out, and the people I had been following were hanging from the power lines, using them as a two-rope bridge to get to a tower type thing, and shimmying down a telephone pole from the tower that went down to the woods.

I thought "this is a weird and dangerous shortcut for all these people to be taking" and was about to head back when a young woman came along the ledge from behind me with a look in her eyes like "come on buddy, there's a line here." So I figured what the hell, none of the rest of these people died, and went out onto the power lines, which I noticed were insulated by a bunch of promotional band material, like rolled up vinyl signs and posters with band names on them. I wasn't worried about falling, but I remember my back and shoulders hurting a lot as I finally got to the tower thing.

When I hoisted myself up on the platform, there were ten or twelve scraggly looking hip kids, all just staring at me like I was an alien. I wanted to say "party at the moon tower" like from Dazed and Confused, but didn't, and one of them, who looked like my friend Kelly (not Kelly McClure, other Kelly, from Baltimore)​ but wasn't her, told me in a very practiced and confident tone "hey man, we're all just up here to take a band photo. But you can stay and chill if you buy us a drink."

And I knew that these people were gonna be my friends, but woke up before I could explain that I was just there as an honest mistake of naive curiosity and hadn't really been following anybody in like a creepy way, and certainly didn't want to mess up any band photos.

@itisbenjo
Posted by Ben Johnson at 8:18 AM