Read a Book, Listen to a Record, Watch a Game


Sometimes when I’m home alone I like to lie down on the couch, pick up a book, put on a record, and turn on a game, and see who wins the all out war for my attention. Here’s what happened last time: 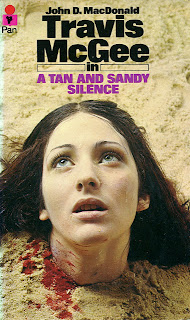 “A Tan And Sandy Silence” by John D. MacDonald

“A Tan And Sandy Silence” is the 13th of 21 paperbacks written by MacDonald featuring the Travis McGee character. I decided to read all of them and am rather mirthlessly following through on that promise to myself. I might just be in the middle of a bad run for MacDonald. Tough to say.

Travis McGee is a “salvage consultant,” which means anti con-man and unlicensed detective, and he lives on a house boat in Fort Lauderdale. His gig is he formulaically pursues a series of deranged grifters, fucks an array of unrealistically reasonable-seeming women who may or may not die on him, nearly dies himself once a book, works himself into a state of superhuman physical readiness which he uses to incapacitate at least one hapless goon, drinks gin, eats steaks, frets through a series of obsolete 20th century moral quandaries, and whines about civilization’s many encroachments into his delicate sense of personal freedom.

I’ve been reading them because they’re tidily paced and take place in warm climates and are cartoonishly masculine. All of which qualities serve as a welcome escape from my long, slow, monotonous life in cold, dreary Chicago, where I am currently tiptoeing ballslessly through the aftermath of breakdown-induced sobriety.

This one is okay. The last one, “The Long Lavender Look” was a gleeful return to form after “Dress Her In Indigo,” which was the most nihilistic, disjointed, and preachy McGee I’ve so far put myself through. I worry about the now dead MacDonald’s state of mind as his paperback hero rounds out the 60’s and heads into the Watergate era. There’s a decent chance these will veer into intolerable territory. He hasn’t even pontificated about Vietnam yet. I know it’s coming. I don’t want that. I want a tall, scarred blond guy to drive boats around in the sun and beat the shit out of some bad guys while saying pithy little things and having an impossibly understanding girlfriend cook him a side of beef. You know, escapism.

Right now McGee is interrogating a lady con artist who’s been impersonating a dead friend of his. This is not a plot giveaway if you’ve ever read on of these books. McGee is laying it on thick, acting pretty sadistically. But it’s okay, these are bad guys. He gets like this every once in a while with the bad guys. 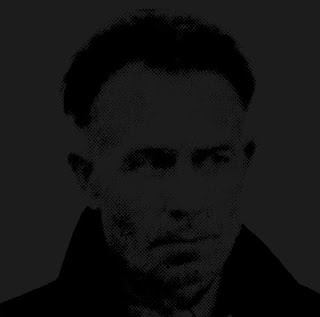 “Obey” is the third album by Swedish noise rock band Brainbombs, recently reissued in limited quantities on the Armageddon Shop label. It is brutal and horrific and tastelessly excessive and great, provided you can take graphic descriptions of murder, rape, child abuse, and/or mutilation with a grain of salt.

The rule of thumb with this band has been one riff per song, repeated into a pounding monotony that causes a nearly transcendent amount of tension. I wouldn’t call it psychedelic, but listening to the Brainbombs makes you different, and you see the world differently for a little while after being spit out on the other side. It’s not entirely pleasant, but it can be somewhat refreshing if you let it wash over you instead of investigating it too closely.

Only a couple of elements here prevent this album from being too awful for me to handle. One is the goofiness of vocalist Peter Råberg’s Swedish accent. It puts the arrhythmically grunted torture porn lyrics just far enough over the top for them to seem more silly than threatening. You know, like Black Metal, except listenable. Also the band’s recordings benefit from a lo-fi, low stress, imprecise production that allows you to take a step back and assume they’re not taking this too seriously. A well-produced, lushly arranged, finely detailed and compressed and multitracked and overdubbed and digitally mastered for optimal fidelity Brainbombs album would be truly frightening, given the content.

As is, it’s just some weird Swedish guys with borderline unforgivably dark senses of humor. Maybe it’s a cultural thing. I’d probably indulge in a few yuks about ritualistic torture if I lived that close to the arctic circle, just to keep myself from snapping completely. From a wryly comedic perspective, Obey dovetails pretty well with McGee’s melodramatically forlorn musings about how living by a code is what makes a man a man. 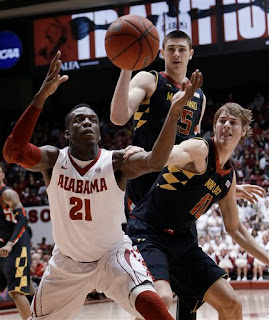 Maryland vs. Alabama in the Quarterfinals of the Men’s NIT Basketball Tournament

The sludgy, doleful repetition of the Brainbombs one-riff-per-song maxim, especially combined with the violent lyrics of “Die You Fuck,” merged well enough with the NIT for me to put down McGee and watch a few minutes of play.

There are two clear best Maryland players. One is small forward Dez Wells, a late transfer from Xavier who was expelled from that Catholic institution in the wake of sexual assault allegations which failed to motivate a grand jury toward an indictment. The rose-colored glasses version of the guy’s private business I tell myself in order to endure my own moral quandaries about rooting for this team is he was the victim of post-Sandusky overzealousness, but he probably did something extremely impolite at the very least. Student sections at opposing schools like to chant “No Means No” at him when he shoots free throws. It pisses him off.

The other top Maryland player is Alex Len, a 7’1” Ukrainian sophomore who’ll probably go top 5 in the upcoming NBA Draft. He has that signature blend of grimness and goofiness that’s unique to denizens of the former Eastern Bloc, who always look to me like they’re moments away from either beheading somebody or gleefully dancing to accordion music. Len displays nimble footwork and moves fluently for a person his size, and he disappears for long stretches of the game and season while Maryland’s shitty ball handlers fail to deliver him the ball. He is doomed to set picks and then roll, ignored by his teammates, into oblivion.

The only other Maryland player of note is Freshman Jake Layman, a tall white Massachusetts native with range in the Laettner mold, who if Maryland had stayed n the ACC would likely have developed into one of those college guys you absolutely hate for no reason. Instead he’ll spend the next year in the Big Ten, where everybody will just be glad he doesn’t play for Nebraska or Purdue or, God help us, Wisconsin, where the platitudes-per-melanin ratio would be off the charts unbearable. Upon Layman’s sinking a three pointer over a shorter defender, every announcer seems to agree he will be a better player later, as if they are looking forward to annoying everybody.

Alabama features the short and fat but strangely nimble Trevor Releford, little brother of one of the guys who plays for Kansas. He’s the sort of player that gets to the hoop with regularity either despite or because of the fact that he seems like he shouldn’t be able to. He’s like a chubby Chris Duhon.

The game is choppy and dispirited, and Brainbombs are providing the lone source of tension, but it matches well. The brutal samishness of the guitar onslaught becomes one with Alabama’s lazy perimeter passing against the Maryland zone defense, and the halting Swedish-tinged lyrical descriptions of psychosexual mayhem merge in unison with a succession of not particularly urgent Alex Len dunks, Releford drives, and shitty Maryland ball handler turnovers.

I feel about the same way about reading the McGee novels at this point as Maryland probably feels about winning games in the NIT. This is like something I love, and it’s still pretty good, but I’m only doing it because I’m here and I might as well and if I finish the task at hand I’ll feel good. If it bothers me all that much, I guess I can put on some Brainbombs and be glad this is the worst dilemma I’m facing.
Posted by Ben Johnson at 10:03 AM