Doing God's Work From the Passenger Seat of a Kia Soul 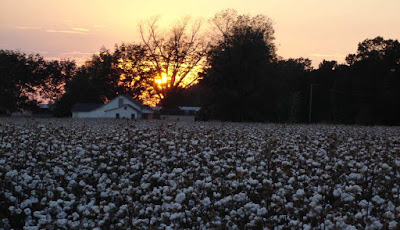 "Are you seeing this? You should be seeing this," Lindsey said as she anally (that's just a step up from carefully) inched down some random highway in Texas. "There's shit out here that we don't get to see everyday."

Kelly squinted out the passenger seat window, shifting the focus of her left eye, and then her right, to maneuver around a particularly large squished bug on the glass. Alongside the road was an endless sea of puffy white cotton fields. She wished she could roll down the window and spill her body out of it, like you'd discard the last few sips of a flat can of pop. She pictured what it would feel like to suffer the initial bounce and scrape of concrete, and then the mix of prickly and soft, once she rolled her oldish bones over to the cotton, waiting there in the sun.

"I can't, I'm writing about Missy Eilliot," Kelly mumbled into the keys of her MacBook Air, the screen of which had been her main scenery for over 50% of the ten day road trip they'd been on. She'd offered to work via car, which isn't all that different from working from home, aside from the moving, in order to be able to keep her new writing gig, AND go on tour with her wife, a thing she'd never thought would be a thing in her life, and it seemed like a good idea until she fully weighed the cost of it. Like, the cost of sacrificing being able to stare at weird cows, and cotton fields, in exchange for ... yeah.

The right side of her face was warm, almost painfully so, and she thought again about how much she'd like to feel a clump of that fresh cotton in her hand, lingering on it for a few minutes before returning to the sucking blue/white glare of her laptop screen. She checked the amount of data she had left on the hot spot device she bought for the trip. Almost 75% gone. She opened a new tab to Verizon and upped it. There's a joke to be made about someone who pays almost $200 a month for their phone plan, but never talks on the phone.

Kelly was already making a mental note to check the Facebook page of the site she was writing the post for in a few hours. She got a sick pleasure out of torturing herself by reading the comments on her posts. Always an uneasy mix of racist, sexist, and flat out dumb. It's almost as interesting to read the amount of ways a person can misspell a word, while trying to be uppity and insulting, as it is to read the posts themselves.

"People are so fucking stupid," Kelly said, sort of in the direction of the glove box.

Kelly took one last look at the cotton fields and her mind filled with a bunch of different things. How her Dad hugged her with one arm when she stopped by to visit a few nights ago, how her Gramma asked her the same question about the coffee mugs she bought her as an early birthday present six times, how easy it is to just all of a sudden stop knowing someone, and how scary that is. She thought about how no one seems to hear her, in a crowd, and how she cares, but then doesn't care, and how it's all the same, for everyone, in some way or another. She started to get annoyed with herself, and how when she's "thinking about things," it's usually always the same shit. She looked out the window, as the last few rays of the day's sunshine kissed the cotton, and went back to typing.

"Wanna switch soon?" Lindsey asked. She'd been driving for six hours and was getting loopy.

@WolfieVibes
Posted by Unknown at 8:49 AM