It has been almost a year now since I moved from Brooklyn to New Orleans and I am still learning my way around the city, and all the different cultural things that the city has to offer. In the case of all the other places I've lived in (California, Illinois, New York, Washington) and the different little cities within those states that I dipped in and out of, there weren't very many societal "rules" that you needed to pay attention to aside from the obvious: don't be a dick, and don't wave your money and/or cellphone around after the sun goes down. Washington is an exception here I suppose because I quickly learned while living in Olympia that "tea" was a rule. You had to like tea, OR ELSE. New York was the easiest. New York just sucks you in like a big beautiful toilet bowl filled with a mucky mixture of everyone else's muck and is like "figure it out and don't cry about it." I like that. In New Orleans, there are rules. You move here and you basically need to keep your trap shut for like five years until you learn about everything enough to where you don't sound like an idiot when you talk. I barely feel comfortable saying "Second Line" out loud because it's like "can I say this? Am I allowed to say this? No? I'll give it another year." It's cool though. I'm putting in the work and I want to be here. And me wanting to be here means that I'm not trying to piss anyone off or do anything dumb. I will navigate around this city very gingerly until people stop looking at me like I moved here to flip houses.

One of the things that I love about New Orleans is that it is quite literally like no other place on earth. People don't really care about the internet here, everyday feels like a weekend, and there is a constant stream of things to do, about half of which I understand, but am very eager to insert myself in. I have lived a lot of places and yet I have never seen anything like this place. It's unique by a mile, and I'm into it. I went to my first big-ish parade on Halloween and got to catch actual beads from an actual float for the first time. I quickly adapted my own unique way of doing that which was to just throw both arms in the air and hope that beads got wrapped around them like tree branches. It worked fine. We have beads on our front fence now, which is what some other people on our street do. We're fitting in. Last week we went to the David Bowie Second Line which was a thing that Arcade Fire put together to honor Bowie's passing. I bought a wig for the ocassion and we met up with our friends at the exact spot everyone was supposed to meet up at. We had the parade route saved on our phones, and a growler of wine in a tote bag. We were ready. Totally ready to stand in a growing swarm of people for 45 minutes then all look at each other at the same time like "what's happening? Did we miss it?" I don't know if the band jumped from the balcony we saw them give their intro speech from over our heads and down to another street or something but we didn't see shit. We caught some beads that some rich people threw upon us from a balcony above, then walked away in search of sandwiches. Our first Mardi Gras is coming up soon and we'll do better. We'll learn the rules better this time.

Yesterday, while sitting at my desk at home, my wife sent me a Facebook event link for THIS. Upon first glance of the event you would think that, yes, Father John Misty was organizing a Second Line of his own this weekend, this one intended to honor the passing of Glenn Frey from The Eagles, which is a totally normal thing that would just normally happen and then be seen on the internet. Mind you, I am not a personal fan of Father John Misty, or The Eagles, but we were like "OMG, this is ridiculous, let's go." I took things further and sent the link to my editor at Maxim and was like "OMG, this is ridiculous, let's write about it." Which I ALMOST DID, until taking a closer look at the parade route:

The "continue into river" part said it all. This was obviously fake. BUT! BUT! I better check, just in case. I mean, weird things happen every day. And also, they do that thing here where they walk kind of into the river to sprinkle the ashes of a loved one into the water, so I thought maybe "continue into river" could mean that in this instance. I emailed Father John Misty's publicist, Frank Nieto at Sub Pop. 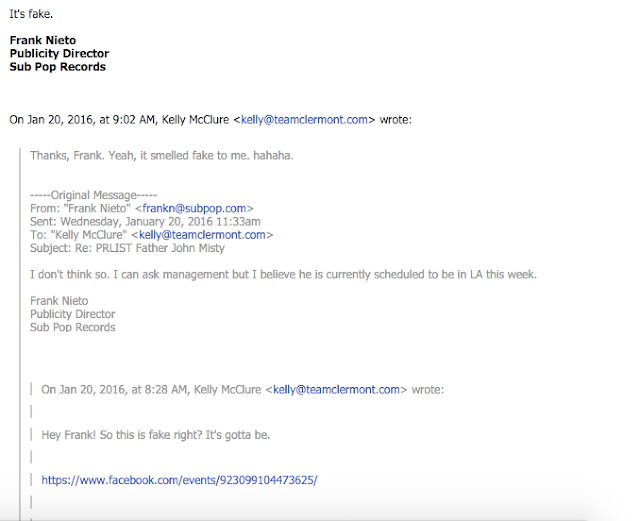 People on the event page thought it was funny that I did that, but hey, again, you never know. And yes, I AM Sherlock Holmes.

So after it was established, beyond any reasonable doubt, that this was fake I continued doing my daily work stuff. In my absence, things continued to brew and bubble into a full fledged shit storm.

First Father John Misty himself tweeted to be like "this aint real," which is normal. But then he went on to the actual Facebook event page and told everyone a story about the Rainforest Cafe. 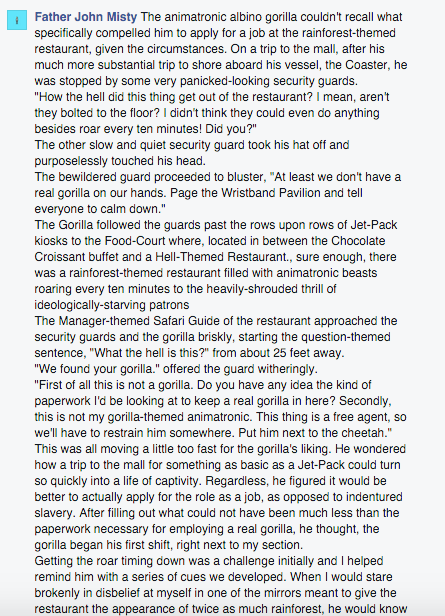 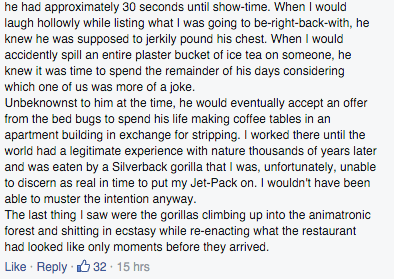 So the lesson I learned yesterday was that if you get a Facebook event invite for something that seems questionable, ask about it. And if enough people inquire, Father John Misty will (regardless of the event in question) emerge and tell you a story about something.