'Carol' And The Case Of The Tragic Lesbian 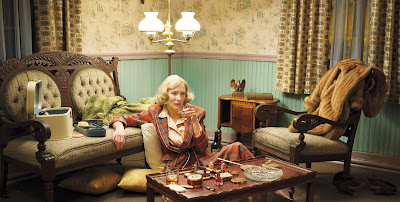 When a lesbian movie comes out it's very exciting, regardless of what it's about or who's in it, because it's rare that we (the lesbians) get a movie that reflects our own shared experience of going through life while being all lesbian about everything.
Unfortunately, almost every lesbian movie has to be filtered through an emotional colander, catching the fun, hanging out, normal life, kissing parts and letting the bulk of the film - which usually centers around the main lesbian characters suffering some extreme emotional, physical, or societal tragedy, go down the drain. This was very much the case with Carol, which I intended to see several months ago in the theaters, and finally just watched on iTunes.

Aside from a few brief exchanges of actual human intimacy, a few scenes with Sarah Paulson - which felt like eyeball heroin - and three random seconds of Carrie Brownstein where she was very much used to demonstrate "here, you sad lesbian, here's another lesbian for you," this movie was very much just another cautionary tale of how being a lesbian will ruin your life, the lives of everyone around you, and always has/always will.

It goes without saying, or should go without saying, that it is undeniably important to have films that show how lucky we (the lesbians) are now versus the amount of literal burning, beating, throwing-in-jail-happening, and "corrective raping" that was just a part of lesbian goings on back in the day. A lot is definitely better now in that lesbians can be allowed to legally marry - provided the person offering up the license is cool with having that happen - and we can 50% of the time buy a wedding cake/dress 50% of the places we'd want to do that. ¡Viva la Revolución! However, wouldn't it be nice if we could readily watch a film that's  just about two lesbians, or MANY lesbians, having a fun life together where no one gets raped, tries to kill themselves, or goes back to "the man?"

Most of the lesbian movies I can think of off of the top of my head are tragic as shit. You've got Heavenly Creatures, the touching coming-of-age film where two lesbos fall in love and then kill a mom. Then there's Lost and Delirious where a scorned lesbo becomes so lesbo that she turns into a bird and flies off the roof of her school. Blue Is The Warmest Color is more or less three hours of insanity capped off by a return to "the dick." And Foxfire, a classic none the less, is about how being a lesbo will turn you into a heroin addict and/or make you go on a crime spree. There are only two exceptions to all of this that I can think of in my personal mental lesbo movie library and those are D.E.B.S. (aka, the best movie ever) and Imagine Me And You.

The IMDB description for D.E.B.S is hilarious, considering it says literally nothing about the beautiful love affair that takes place between two female characters in the movie, which almost the totality of the film revolves around:

"Plaid-skirted schoolgirls are groomed by a secret government agency to become the newest members of the elite national-defense group, D.E.B.S."

The description for Imagine Me And You fucks it up too:

"Rachel and Heck, long time friends and lovers, finally tie the knot, and during the celebration, Rachel starts a friendship with their florist, Luce. And while Rachel originally intended to match her new friend, Luce, up with her husband's friend, Cooper, she soon finds out that Luce is a lesbian. During the course of their friendship, Rachel starts to question her own sexuality. And though she comes to realize she may have feelings for her new friend, Rachel must decide who she will ultimately find the most happiness with: Heck, her new husband who is also adored by her family, or Luce, who has turned her life and everything she thought she knew about love upside down."

What do we know about Carol? Is she a good person, or a bad person? The shit eating grin we're left with at the end of the film, to me, implies the latter. There was no obvious warmth in the eyes of either of the main characters as they re-connected at the restaurant in the final scene. If anything, it seemed that the parting message for viewers was "see, lesbians, you made your lesbian bed, now sleep in it. Lesbians!"

At least no one got killed, or killed themselves. Really though, who has soup on a first date?