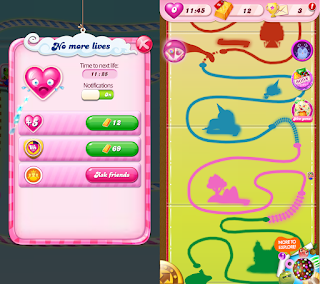 Look, I know this is bad, okay? This is real, real bad. From a certain entirely accurate psychological standpoint, it’s about the same thing as saying, “sometimes I cut myself,” or “I wish I was dead.” But: I’ve been playing Candy Crush Saga on my phone lately. You know, that game people play with the colored dots that you move around and then they explode, and whenever you see somebody playing it in public on the train or in an airport, commuting home in their business slacks and sneakers, you think, “that is just about the saddest thing I’ve ever seen”?

This is just where I’m at right now, okay? I’m stressed out for a large portion of my life, and then I do this mind-numbingly stupid thing, and then in those moments I find I am doing this thing and not doing anything else, and my mind is soothingly numbed. It’s fine. It’s a fine way to spend your time if the rest of your time is comparably harrowing.

I’m learning from Candy Crush Saga. I’m not learning, like, math things, or “always do the wrapper candy first because that’s hard to get” things, although maybe I’m also learning those things. Really what I’m learning about is—and forgive me for saying this, because believe me I know how it sounds—my own adulthood.

Here are some things being alive, at least my experience of it, has in common with Candy Crush Saga right now:

4. Series of things you have to do

5. Very little control over the things that happen

8. I don’t know who anybody is even supposed to be

10. You screw up a lot but mostly it’s no big deal, like most of the time the stakes are really small, like what if I did that thing differently and then that thing would go here, oh whoops, maybe I lose this level and/or the hot dog guy thinks I’m a jerk for like three seconds

11. Sometimes you have to stop, like sometimes you are forced to stop unless you want to bother people you know or pay extra money or cross a similar internal boundary into territory you’ve decided is unhealthy

12. It feels good to get stars or see your name climb a fake leaderboard even though it doesn’t really mean anything

13. The future is just a weird map with no features on it

14. I’m pretty sure I’m not the bad guy, but really there’s no way to know

15. I probably need to get my eyes checked, like I should really do that

Okay, I made up that last one. Candy Crush Saga doesn’t really make me feel that way about culture, except insofar as I moved to Baltimore less than a year ago and there’s all this interesting and weird stuff to do here and all these new people doing it, and I am constantly confused and feel myself struggling to find anything real I can look at and say “this is who I am,” and maybe the weird things and the new people are more of a distraction than a help in that regard, kind of like how Candy Crush Saga is more of a distraction than a help in every regard.

Am I reading too much into Candy Crush Saga? Not a rhetorical question. Genuine question.

And also: no I am not reading too much into Candy Crush Saga. It’s my life and I can play a dumb game and think whatever the hell thing pops in my head during that. I can do whatever I want. I’m basically a sprinkles candy right now, and I can explode all the blues, or turn them into stripes, or wrappeds, or I can also be Swedish Fishes. I don’t have to listen or do anything. Not all of the time. Nobody can do it all of the time.