I Spilled Pizza On the Greatest Forgotten Author of Our Time

Last weekend I was eating at my apartment when I accidentally dropped a slice of pizza on a stack of books next to me. This shouldn’t have been a big deal, but when I looked down I saw the book that took the most punishment was The Collected Stories of Richard Yates, and this picture was staring back at me: 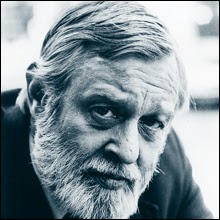 Richard Yates was one of the greatest writers of the twentieth century and almost no one I know knows who he is. Two of his novels, Revolutionary Road and The Easter Parade, are masterpieces, and Kurt Vonnegut called his book Eleven Kinds of Loneliness “The best short story collection ever written by an American." A Good Man is Hard to Find and Nine Stories may still have the edge, but the point is Yates had mad game, son. Aside from his friend Vonnegut, David Sedaris, Tennessee Williams and Woody Allen (who named checked The Easter Parade in Hannah and Her Sisters) are all huge fans. The episode of Seinfeld where Jerry has to meet Elaine’s terrifying father is based on Yates, whose youngest daughter had dated Larry David. So why does no one know who he is?

The easiest answer is that Yates almost exclusively wrote about regular people in this country and how the pursuit of money and happiness flat out crushes them. How relationships gradually burn themselves out and what happens when your wildest dreams don’t come true. He managed to hilariously time his career with the blind optimism of the 1960’s when people especially didn’t want to hear about broken dreams, inescapable marriages, and the consequences that come with making the wrong decision. Yates’s writing is everything Mad Men tries to be amplified by 50,000. Yates wrote about what happens when the promotion doesn’t come, what happens when you don’t meet Prince Charming, and what happens when the mortgage can’t be paid on time. That pressure does things to people and Yates knew it all to well. Yates understood that’s when people show who they really are, not in the good times.

Quite simply, Yates’s stories contain some of the cleanest, clearest, most stunningly observant prose ever written in English letters. He is absolutely on par with Fitzgerald, Salinger, and Vonnegut, but unlike Fitzgerald he didn’t enjoy the luxury of the 1920’s flapper aesthetic, and unlike Vonnegut he couldn’t enjoy initial success from winning over fans of science fiction (who, Yates would claim, popularized him for all the wrong reasons). Yates’s writing has no gimmicks or easily marketable angles, and for that reason he would scrape for money almost his entire life. Yates wrote about the blunt truths we’ll all face sooner or later that no one wants to think about. His stories don’t exist just to depress you, they’re cautionary tales designed to help you live a better, fuller life so you don’t make the same mistakes as the characters in them.

And now this. Just look at him.

“How could you do it, Ben? How could you drop pizza on me? You knew all I went through in life and you can’t even keep me dry from pizza? From Tombstone pizza? (Sigh) Oh well. Makes sense I guess. Who needs a drink?”

Yates desperately wanted to be rich but he wasn’t. He wanted more than anything to have his stories published in The New Yorker but they never would be. He wanted his novels to receive glowing reviews from The New York Times Book Review but they never did. He wanted to keep living in Manhattan but he couldn’t. Years after Yates’s death The New Yorker published a profile on him and felt inclined to include the backhanded comment “In truth, Yates only had about ten good years." Pure class! Why couldn’t I have dropped pizza on Klosterman’s clown ass--whoops that would involve me having to buy any of his books #served.

Yates’s life was a non-stop horror show of misfortune, alcoholism, mental illness and all-permeating sadness. If you grew up without an alcoholic mother who would drunkenly crawl into your bed and puke on you in between evictions you had a better childhood than Richard Yates. He idolized Scott Fitzgerald and would try to write like him every day when he was young. After a traumatic and humiliating service in World War II, he finally got some recognition with his debut novel Revolutionary Road, but the success would be short lived.  Most people know of it from the forgettable film adaptation featuring a dynamite performance by Michael Shannon, but it doesn’t come close to touching the book.

After a divorce and a series of odd jobs, Yates wrote speeches for RFK speeches until his untimely assassination. Quickly running out of cash, Yates landed at the Iowa University Writer’s Workshop where he met fellow faculty member, Kurt Vonnegut. The two bonded almost instantly through their shared WWII service, their mutual love of writing, and their fondness for getting fuckin’ hammered. Yates gave all of his students A’s, and would tell them things like “Let the characters give themselves away despite their best efforts not to.” Yates taught NYPD Blue and Deadwood creator David Milch, who he would make fun of constantly. Towards the end of Yates’s life when he was half-crazed and totally broke, Vonnegut supported him financially, and felt it was his obligation to do so.

Yates was hospitalized for a series of mental breakdowns and psychotic episodes throughout the latter half of his life, not the least of which being an incident involving him wandering the streets aimlessly while emptying all of the money out of his pocket onto the streets, where people would collect it.

Yates did not play Rock Band. Yates did not go to ESPN Zone. Yates is not interested in participating in your fantasy draft. He responded to the brutal hand that life dealt him by drinking himself into near oblivion and smoking more cigarettes than anyone previously thought humanly possible. He just wrote and wrote and wrote and that’s why he’s one of the best. On top of everything else, throughout Yates’s career he was plagued by a series of historically shitty cover jackets for almost all his books. They have all since been fashionably re-designed, but check out this first edition cover art for his novel Young Hearts Crying... 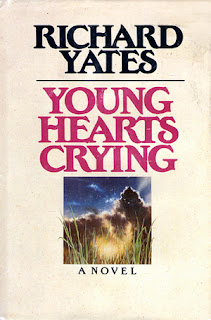 Holy shit! Doesn’t exactly make you want to spend money, does it? Yates dealt with that kind of thing all the time. Which brings us once again to the pizza. The pizza was merely an extension of what had been happening to him his whole life, and now misfortune followed him beyond the grave. He would have handled it the way he handled everything, by soldiering on. In my imagination, after the pizza is dropped on him, Yates takes a moment to quietly collect himself, removes a handkerchief from his breast pocket, assures me it’s not a problem, and then goes and drinks for months. Then, when I least expect it, he writes a short story about a broken man named Ken Geeder where he calls out all of my flaws and idiosyncratic habits to a T, rendering me totally defenseless.

Yates ended up dying poor, anonymous, asthmatic, and even worse teaching English at the University of Alabama. When friends and authorities went into his apartment, they found virtually nothing except some pictures of his daughters and a transcript which he’d been working on that he kept in his freezer. When he died, all of his books were out of print.

At his funeral, his friend Vonnegut spoke beautifully, the transcript of which you can find here.

After the pizza disaster, I gave the grease and sauce stained copy of his book to a friend and re-bought The Collected Stories... in hardcover, but it didn’t make me feel better. Everywhere I went, I kept seeing those sad, disappointed eyes looking back at me. He was supposed to be really funny, so maybe he would have had a sense of humor about it but probably not. Everyone should read him. Read Revolutionary Road. Read The Easter Parade. Read his short stories. Read A Good School. And if you are so inclined, read the tremendous biography on him by Blake Bailey called A Tragic Honesty.

I’m sorry I dropped pizza on you, Dick. You rule and I hope you can forgive me.