The Octocopter Takes the Peanut Butter From the Bucket, It Does This Whenever it's Told 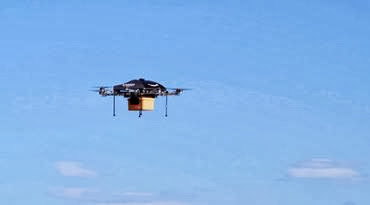 I don't really know what's going on in the world anymore. I don't like to leave my house, and I've been sad. I've been eating things, and watching a show on Netflix about weirdos who own a weird store. I'm busy. I pick up bits and pieces about things the same way everyone else does though, by reading the internet on my telephone while sitting on the toilet, waiting for a thing, or laying in bed unable to sleep. While doing this recently I learned that robots in the sky will now be delivering our packages from Amazon.com, similar to how illuminated balloons that make a pleasant tinkling noise deliver ointments to people in the Hunger Games movies. Really? You're asking yourself, even though you probably already read about this on the toilet as well. Really. Here's how USA Today is explaining this:

"Amazon.com is testing delivering packages using drones, CEO Jeff Bezos said on the CBS TV news show 60 Minutes Sunday.
The idea would be to deliver packages as quickly as possible using the small, unmanned aircraft, through a service the company is calling Prime Air, the CEO said.
Bezos played a demo video on 60 Minutes that showed how the aircraft, also known as octocopters, will pick up packages in small yellow buckets at Amazon's fulfillment centers and fly through the air to deliver items to customers after they hit the buy button online at Amazon.com."

My thoughts upon reading this are too numerous to properly organize, but they start with:

- Probably upwards of 5,000 people have died of AIDS in the world since I started writing this, but please, give us the drones so we can get our feminine washes and scented highlighters as fast as humanly possible. This is what we need.

- "The Octocopters will pick up packages in small yellow buckets." I don't know. There's something weird about seeing the word "bucket" in the same sentence as "Octocopter." Why's it gotta be a bucket? And even if the only possibility was "bucket" - why not at least call it Octobucket? Or package vestibule portal?

- These Octocopters will be coming in the window? Or ...

- Between the people in your neighborhood who spend their days and nights running up and down the street screaming and urinating on things, and yourself, which do you think will be up on the roof with a fishing net waiting for the Octocopters?

Earlier today I had NPR on in the background and as I walked from the living room to the kitchen at one point I focused my attention just long enough to hear a guy say "these things could land on someone's head!" Yeah!!! Think of all the head landings!!!

To better illustrate, let's take a look at the past few things I've personally ordered on Amazon and rate them on a "this would be pretty embarrassing to have land on my head" scale" 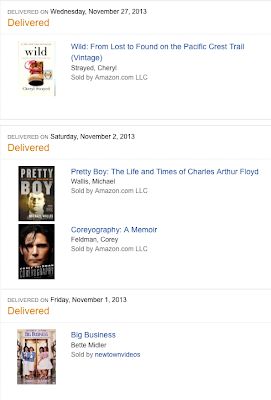 Let's see, between Wild, a biography about Pretty Boy Floyd, Corey Feldman's memoir where he talks about being molested by men for almost his whole life, and the feature length film Big Business - I'd have to say that I'd be most troubled by Coreyography falling on my head, but I'd deserve it. 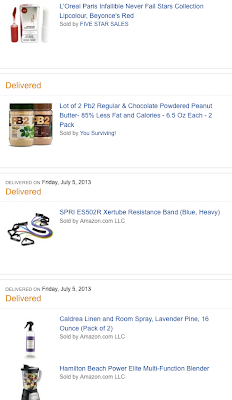 Here we have Beyonce's signature lipstick from L'Oreal, substitute peanut butter for people who are trying to not be fat, resistance bands that I am constantly snapping myself in the face with by accident, lavender pine linen spray, and a blender. Well duh. Picture walking to Starbucks or wherever the fuck you're trying to go and a blender falling daintily from the sky onto your head. How embarrassing. How embarrassing, right? Blenders are heavy. No thanks for that, OCTOCOPTER. Like I don't have enough to worry about.