Corey C. came to us from the sands of the internet and he is rad. This is his column, "Corey On."

Recent Internet news claims that the Vivian Girls are ‘breaking up’ and ‘playing a few bye-bye shows’.

I approve of the first part. Most bands should break-up. The world would be better with fewer bands. If you’re reading this, and you’re in a band, please break up, then start a new band with cooler people with better taste and cheaper guitars.

Whenever I am reminded of the Vivian Girls, I think of the two times I saw them perform, two nights that were memorable in spite of their mediocre music. And that’s fine, no great loss to humanity. Just another middling buzz-band created in the 2005-10 Internet Indie Rock Implosion that once upon a time made a couple nights more boring. They played a role in my music-appreciation education: I needed to see boring bands, so then I could properly value good bands.

No, it’s not their overall existence that’s irritating me. It’s the part about them saying bye-bye in a public forum, that’s the part that’s driving me crazy, cuz Vivian Girls aren’t a good live band. Why are they playing these shows? To remind us of how poorly their sound has aged over the past five years? To prove again that they’re not very interesting people or musicians? Shouldn’t they just stop and limp off into the sunset, like most bands that got their fifteen minutes of Internet fame? The best answer to all these questions is that their fame sure is fleeting, and they need to cash in on that shit in a hurry. 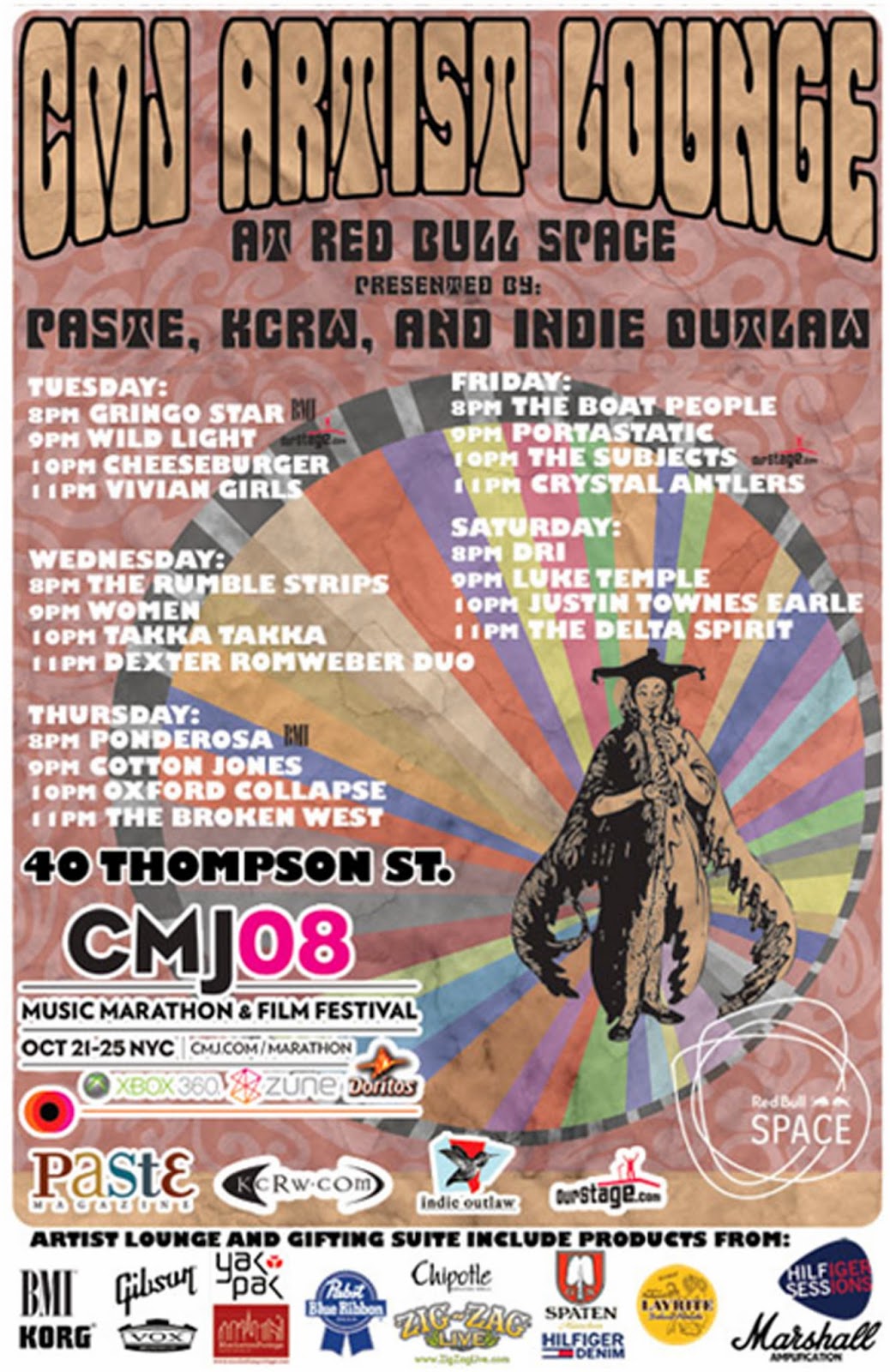 One night the Vivian Girls were playing at the CMJ Redbull and Paste Magazine Artist Lounge. Looking at the old flyer for it, I’m reminded of double-fisting free Red Bull and Pabst Blue Ribbon and sitting in a window seat and staring out at the New York City streets and thinking about having a helluva time finding the place cuz these were the days before GPS iPhones and I have the worst sense of direction and I’d try to use a map and would always get lost trying to find these damn shows at CMJ that I’d need super-duper VIP status to get into half the time, and was forced to give hand jobs to get into the shows, and half the time the bands fuckin’ sucked anyways, so what was the point trying to run around New York city and get rejected half the time and be disappointed the other half?

And why was I at this show? The Vivian Girls, I suppose, sounded like a cool band to me, at the time, mostly because I was 21 and hadn’t heard a band like that before. Five years later, when I’m bored, I like to lazily make fun of bands that were clearly influenced by the Vivians. (You know Best Coast? More like Worst Coast.)

I’m remembering now how I was sitting there in this window seat and I was pissed cuz my radio station friends had taken the L into Brooklyn to Death by Audio to see Parts and Labor and Double Dagger and I was alone, in lower west-side Manhattan, 40 Thompson St., in this room that wasn’t even a real rock club, sipping on warm Red Bull and warmer Pabst Blue Ribbon and getting the worst vibes from the bouncers who were lining the floor and looking menacing.

I am now shaking my head at myself for missing that show at Death by Audio. No bouncers at that show. But at the time, I was pissed my friends didn’t come with me. They didn’t care about the Vivian Girls, and, upon reflection, I don’t blame them. A couple months later I would become unreasonably obsessed with both Parts and Labor and Double Dagger and I’d see them play before they both broke up, and I tried making up for that original sin of missing them play at a DIY show in 2008, and Lord I prayed for my forgiveness!

Before reminiscing about Vivian Girls sucking, I must recount seeing Cheeseburger at this show. They played directly before Vivian Girls and are best known for writing the theme song to Superjail!, a hilarious, psychedelic animated show found on Adult Swim which, apparently, their guitarist co-created. My friend once reviewed one of their records and described them as a ‘more drunk and sloppy version of The Stooges.’ Of course, their set was awesome, and their belligerent attitudes saved my night from total disappointment, and in-fact educated me to the delights of non-professional performances, or, having fun.
Right before their set, someone involved with the band asked me for or offered me cocaine in the bathroom, then the same guy got kicked out of the show by one of the burly, uptight bouncer dudes after he had half-heartedly tried starting a mosh pit with the other 12 people surrounding the stage, and the bouncer-guy over-reacted and was way-over-the-top, and everyone was like, whoa, easy does it. Paste and Red Bull and CMJ do not fuck around. Cheeseburger’s music was ridiculous and stupid and the singer balanced a Red Bull on his head cuz it was funny, but the unnecessary escort out of the show by the over-zealous bouncer certainly took the wind outta Cheeseburger’s sails. 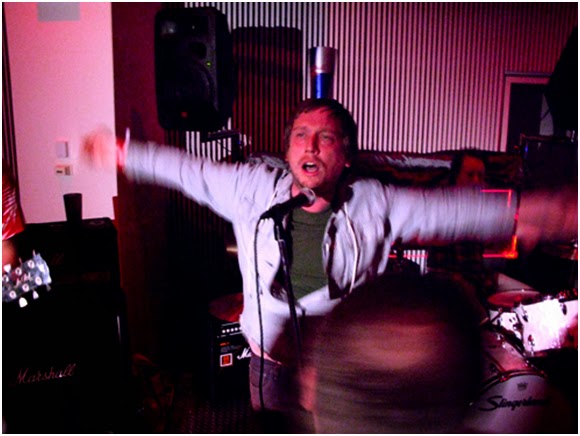 The awkwardness continued into the Vivian Girls’ set. Apparently, they were playing a cooler, more underground show somewhere in Brooklyn the next day, and nobody came out to see them that night, because they were playing in this stupid corporate-sponsored venue. Turns out, they sucked, and maybe they weren’t trying cuz no one was there? Cheeseburger at least decided to try to have fun, they put their efforts in the right direction, because life is short, and playing a rock show does not need to be taken that seriously, ever.

Listen, Vivian Girls, they truly sounded awful. There’s no other way to put it. No energy, stage presence, or any relative enjoyable-sounding music emanated from their collection of instruments onstage. It was hard to discern one song from the next. It was like watching boring incarnate. And they were taking it all so very seriously, a bigger offense than anything else that went on that night.

I left that night pretty pissed off, especially after I heard about the glories of the Death by Audio show, although my friend did get too drunk and made everyone miss the train home and they got back to our hostel in Harlem super late. Glad I missed that part.

OK, if you think that I may have seen the Vivian Girls on an off-night, due to the truly dreadful venue, I have yet another example of their incompetence. This was three years later, at The Met in Pawtucket, RI, on tour with The Black Lips, April 2011.

I remember there was a fresh no-moshing sign hanging up to the left of the stage. I observed a bartender shouting at spliff-smoking riffraff hanging out on the back deck of the place. I sorta got in a confrontation on that deck with John McCauley from Deer Tick. I was talking about how Deer Tick’s new ballad-heavy stuff sounded boring and I wish they had more gone down a drunken Black Lips path and, you know, rocked a little harder, and had more fun, like this band Cheeseburger I had seen last time I saw Vivian Girls…

And lo and behold, there’s Mr. McCauley himself, directly behind me, as I’m saying this, and he definitely heard me, and I try to play it off like I was joking and he’s kinda getting a little jaunty and in my face, or maybe vice-versa, me in his face, but either way, it was getting somewhat confrontational, a rumble was about to break out and luckily my friend knew Mr. Deer Tick, and he made a joke and defused the situation, and then the three of us talked about how we wish we were seeing Vivian Girls and Black Lips three years ago, and I start telling them how Vivian Girls sucked three years ago. I heard that The Black Lips had played three years ago and allegedly peed all over AS220, the legendary Providence art space, and that I approved of such shenanigans because they make me laugh and there are so many uptight artist-types in there. Unfortunately, I heard there was no crowd for that Black Lips show at AS220, but whatever, peeing your pants is still the coolest.

Soon after this little chat, the Vivian Girls played, and totally sucked again, but hey, one of them did learn how to play a guitar solo! And, you see, I got so bored, and imagine if I hadn’t been so bored I wouldn’t have done this, but I was totally and completely bored, and I decided to text a girl I had awkwardly hooked up with the weekend before, and I told her that she kinda looks like the cute girl from Vivian Girls or something as clumsy and obvious and then she immediately texted me back to tell me that she had met somebody else and that we should stop seeing each other or having any contact at all. I was bummed, but at least we had made out a Parts and Labor show.