Would You Rather Something Something or Have Vomit in Your Hair? 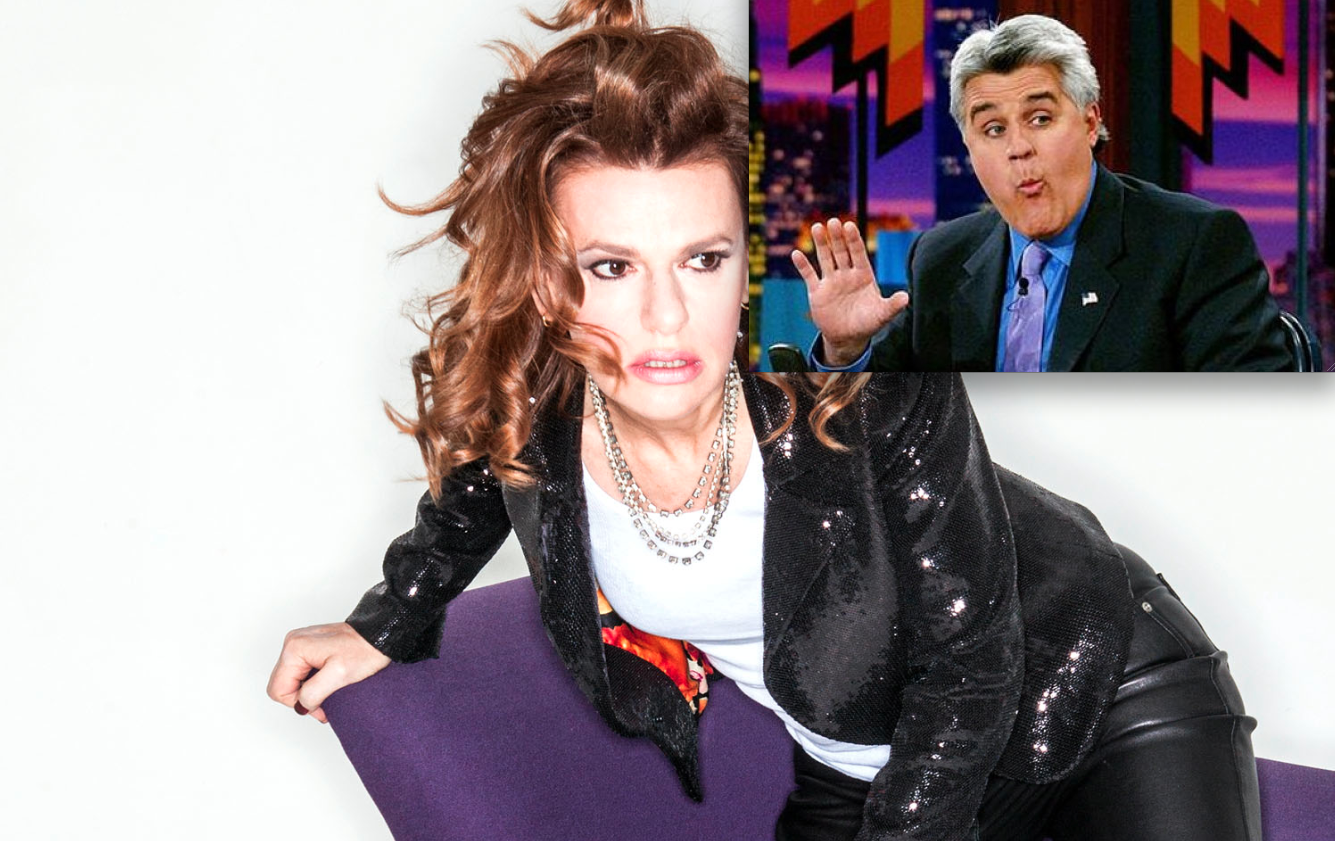 There are certain celebrities who I think of fairly regularly, and I usually choose to make these thoughts known via Twitter. It would be an easy enough thing to have a thought like "I wonder what Lily Tomlin is wearing today, probably a denim shirt," and keep that thought inside your head, but since we live in an age where things exist (such as Twitter) that allow us to take these thoughts and throw them like a clump of wet noodles against the walls of the sucking vortex of the cyber world, why not do it? Not doing it is basically no different than doing it, in that neither choice will make any difference in the world, and neither will any other choice. So just do it. Basically what I'm saying, in general, is: who gives a shit, we're all gonna die.

When I was in high school I was pretty interested in some pretty weird shit. I didn't know much about anything, but I knew that I for sure wanted to learn as much as possible about pervy naked lady stuff, and I guess vampires and serial killers too. These are two very different, and yet historically intersecting roads of a human brain and luckily for myself, the Chicago, Greater Los Angeles, and now NY prison systems, and the world at large, I stuck pretty close to the guard rails of pervy road and not wet lumpy trashbags of human parts under my floor boards road.

A good thing that can be said about life is that sometimes two different things you enjoy will have something to do with each other. For instance: Sandra Bernhard is funny, and she's also a lesbo, which is another thing I like. If it's two things I like, it's lesbianism, and funny things. That's TWO things, and sometimes they'll be mushed together in one person, such as in the case of Sandra Bernhard.

I read Sandra Bernhard's autobiography in high school. I think she has two of them, and I can't remember the names of them, but I KNOW that I read them both. Even if it turns out that there's a third one, I read that one too. In this first autobiography of hers she mentions a lot of facts but the one that I randomly thought of the other day, and decided to tweet about was:

And this is true. Sandra Bernhard got naked with a naked Jay Leno and they touched genitals. She also made mention of the fact that his private man areas are huge. She used the word HUGE. He was apparently so huge, that she felt like HER private lady areas may not be able to accommodate his hugeness. This seems like a good problem for a man to have, but then maybe it's not because it creates a problem, and having problems during sex things is usually something you want to avoid. I don't know. What I DO know is that thinking about Sandra Bernhard having genitals sex with Jay Leno makes me want to puke, and apparently, (I learned this on account of Twitter, which you'll see) it makes other people want to puke too. Here's what that tweet about that thing I thought about resulted in: 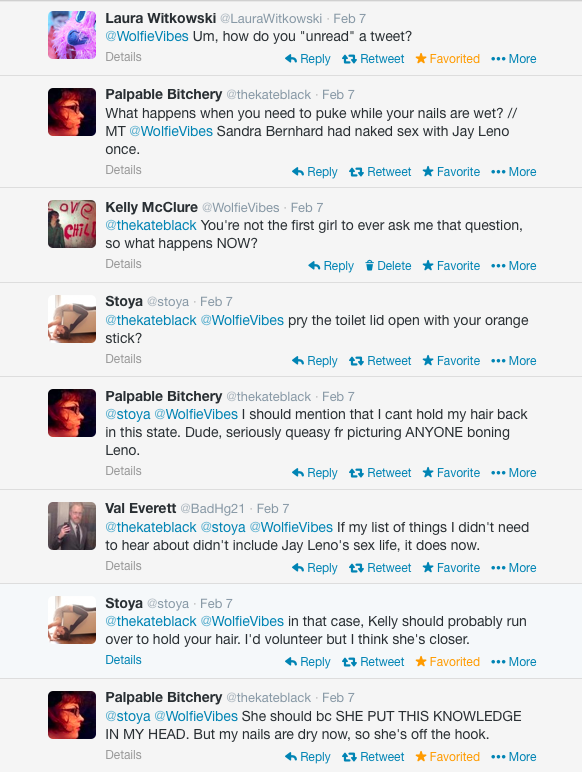 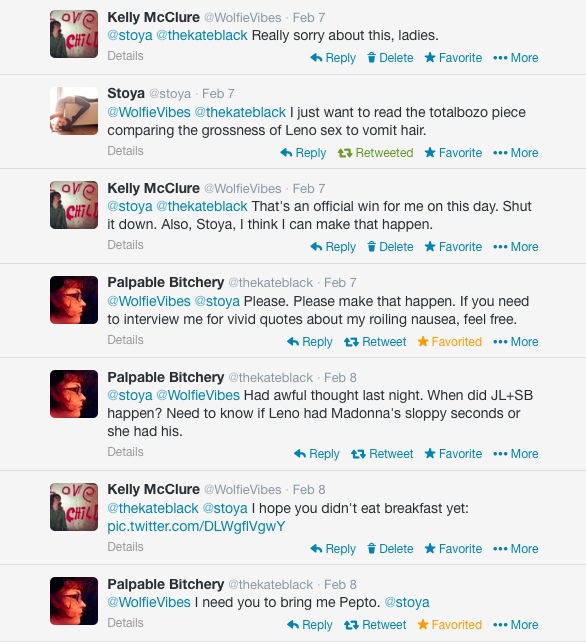 With the facts laid out in front of us like this it's easy to see that:

1) Most importantly, people like me.
2) Second in importance: hot ladies on the Internet know what Total Bozo is.
3) A diverse sampling of personalities on the Internet agree that the risk of getting puke in their hair is less horrifying than the thought of having genitals sex with Jay Leno.

I was thinking about this in the shower yesterday morning ... if it's one thing about puking, it's that it usually makes you feel better. In almost any situation: anxiety, illness, booze-ery, if I throw up, I will feel better afterwards. I don't think that there's any magic to be found in releasing burny food chunk water out of your mouth, so it's not to say that VOMIT in and of itself is a healing tonic. No. Perhaps it's the act of doing something pro-active at a moment of uncomfortability that does the trick. Try out this new motto: When nothing else works: try puking.

There is nothing pro-active about having genitals sex with Jay Leno. Therefore it's safe to conclude: