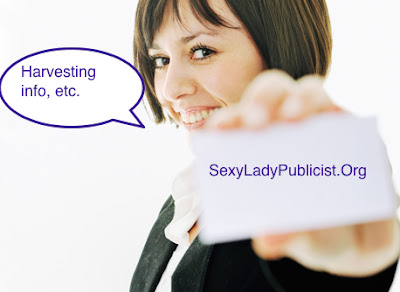 Here's a true fact about me, just to kick things off. I work as a music publicist, but I wouldn't call myself "a publicist" personally. If I'm in a situation where a person is like "what do you do for a job?" I usually say something like "I split my time pretty evenly between helping bands I like with PR, and writing stuff." Do you see the distinction there? I can explain it more.

Publicists get a bad rap. A lot of publicists are considered money grubbing business folk who want to squeeze your dreams for a few bucks, but don't really give a damn about your band, or you, or what you want at all. When I'm meeting with a band that I might potentially work with, this is one of the first subjects I tackle. I go to great lengths to distance "ME" from "THEM." I try to do this by telling the band I'm speaking or emailing with, "I don't own a blazer. I don't go to brunch." And, I mean, I DO actually own a blazer, but it's just the one and I bought it for a speaking event I did. It's not even a real blazer. It's a jersey blazer. I want to make sure you know that I'm cool. Okay? And yeah, I DO go to brunch, but only ironically and because I like to drink in the day.

Coming right out and saying "I'm a publicist" could get you punched in the nose. Nobody likes publicists. They email people all day. They're "paid to like things." When a person is "paid to like things" how can you ever believe what they're telling you? What witchery? What trickery? I mean, a person's ears and brains can do nothing but surrender in the face of such door to door brainwashing, etc.

So, yeah. I'm different. I only work with bands that I like, and most of them are friends and/or referrals from friends that I continue to work with no matter who or what I'm working for. It's all very organic. It doesn't feel gross. YOU'RE gross, okay? YOU are!

At this point I also wish I could do a poll of anyone reading this and be like: "Raise your hands if you know what a publicist is?" I'd ask this because in the past month, when answering the question "what do you do?" I had to explain that I don't personally write about every band I work with, I don't "throw parties," and I don't publish music, whatever the hell that means/does.

Here's a great thing I wrote about what a publicist is, read it and then let's not worry/wonder about it anymore. HERE.


Everyone is such a goddamn idiot all the time.

My main reason for writing this thing doesn't really have anything to do with anything I've written so far.  I'm just trotting out the horse, so to speak. It has to do with THIS.

Over the weekend I was tagged in a Facebook post of a link to a shittily written (and I reserve that phrase only for things that are truly, in every essence, shittily written) thing titled "13 Reasons PR Girls Are Going to Take Over the World."

Let's walk through this together.

Who's "them?" I mean, I know this article is all about "PR GIRLS," but the use of "them" here makes it sound like the writer is giving tips as to how to locate a rare bird in the woods. "One way to find the rare shittily bird in their natural habitat is to crouch down in a bush and wait for them to come out in search of straight up nuts and balls and dicks and such. Watch for them. There "them" go."

Also this: "Both emails will be perfectly-written, and full of whatever pertinent information you didn’t even realize you needed." So this writer is like blown away by someone being able to write a thing that doesn't read like horse shit. We're getting to the root of the issue here.

2. "They look good while doing it. One way to spot a PR girl is to check for the three S’s — statement necklace, strong purse, shiny hair. They pull off the chunky J.Crew-style necklaces like no one else in this world. They are always carrying the purse you have been coveting, or something just like it (often, it’s this one). And their hair reflects every nuance of the sun’s light in its Garnier Fructis commercial shine. Always."

Look me in the eyes and say "statement necklace." I dare you.

A few years ago at SXSW, which is a nerdy band camp thing that all us "PR GIRLS" have to go to, except I didn't go this last year because I'm a "PR WOMAN" now, a male publicist approached me in the wild and said something about how it must be so easy for "PR GIRLS" because we can just use our sexuality to get 14-year-old music editors to write about our bands. I was wearing a Beavis and Butthead baseball t-shirt when he said this. Later on that night someone asked me to go get a sandwich for someone. 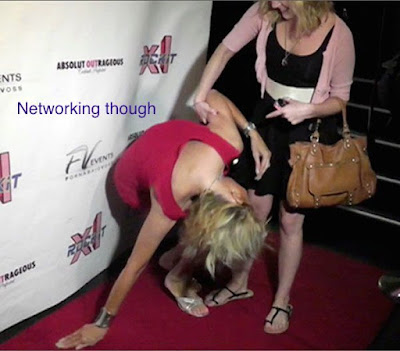 3. "They’ll network you without you even realizing it. You think you are having a normal conversation, but they are evaluating and planting ideas and harvesting information. And it’s not insincere — they are just operating on a totally different wavelength from you."

I am earnestly wondering what "a normal conversation" would be like for the writer of this article, or for anyone else really. One time I was at a music festival/camping situation with a group of friends and I was having a hard time making convo with strangers. One of my friends told me that making convo is easy and that I should try just going up to people and saying any random combo of words. Like whatever words pop in my head. Just now, while writing that, I thought about how I listened to Janet Jackson's "Rhythm Nation" while having my morning poop. Are we networking right now? Honestly though, did I just plant an idea in you?

4. "When they get a goal in mind, nothing can stop them. Anyone who has been on the receiving end of a dedicated PR girl’s efforts to make something happen — anyone who has suffered that barrage of perfectly-worded emails — knows that nothing can stop them. They will walk across hot coals to get their press release in the right hands, and somehow not mess up their pedicure."

What about a "PR GUY" though? Do they barrage? Do they hot coals? Everyone knows that we all only exist inside of computers, right? Like at what point during my day of 100% computers would I be having these hot coals and pedicures? Tell me when.

5. "They rise with the sun and engage in power breakfasts. I once attended a breakfast panel at a hotel where I was unexpectedly seated at a table with almost all PR girls. Aside from feeling like being in high school and somehow getting to sit with the popular, pretty girls at lunch, it was unbelievable to see their level of readiness. They were there twenty minutes before everyone, awake and alive, blowout on point, with questions to ask and people to talk to. I have never experienced anything more intimidating. While I was busy shoveling free carbonara breakfast pizza (!!) and french toast onto my plate, they were not touching their frittatas because there was work to be done. And I have nothing but respect."

I rose with the sun today and my wife made me breakfast and now I'm making fun of this horse shit. For the past 17 years I've chipped away at the limestone to arrive at my end goal: working from home and not having to listen to bafoons tell me to do things in a way more shitty way than I'd do them on my own accord. I'll touch my frittata all I want. (!!)

6. "They have already fused with technology. While we’re trying to experiment with Google Glass or Oculus Rift or whatever, PR girls have already been synthesized with their devices since the debut of the Palm Pilot. Their iPad is an extension of their soul, and it will never leave their side."

7. "They know everyone. Name any person in your industry. They know them, and have had at least one “very productive” phone call with them. Yep."

One time I forgot to turn the sound off on my iPhone after watching a video and later that day my phone rang and I literally screamed. Also every time I get a voicemail I laugh about it for anywhere upwards of two weeks. One time some friends of mine asked me if I had ever been raped by a telephone.

8. "They are always in peak physical condition. They have a yoga class, and a Soul Cycle class, and an entire drawer full of Lululemon. They eat salads and drink juices and take supplements. They must be in prime email-sending mode at all time, and that demands physical fitness."

I'm mad about something all day long.

9. "When it comes time to go out, they go just as hard. Perhaps the only spectacle more intimidating than a group of PR girls at an important industry function is the same group, three hours later, at a club. They embody the “work hard, play hard” ideal, and pursue “drinking lychee martinis and grinding to Beyonce” with the same vigor they pursue “following up on important emails.” Never get in their way on the dance floor."

Sometimes when my wife comes home from work I feel like I can't focus my eyes or form a normal sentence, on account of being a computer all day. It would not be unusual for me to go almost a full work day without saying a single thing out loud. And on the weekends, when I go out, sometimes I feel so sweaty and dizzy that I almost fall down.

10. "They know their environment like no one else. There is no better person to ask for a restaurant or bar recommendation, because they know their cities like the back of their manicured hands. They have the good shopping streets, the best happy hours, and the latest restaurants all stored in their mental rolodex of socializing."

A week or so ago I Google mapped how to get to a coffee shop that's down the street from me, like ten minutes away. I was like "I can't picture it."

11. "They form power couples. When they choose to date, their boyfriends often work in finance or at least, on some more vague level, “business,” and the two of them form the kind of couple that makes you feel like you’ll always be an overgrown child spilling juice on yourself."

Almost every person I've ever dated has either been an almost actual prostitute, or the kind of person who gets mad if they have $5 and I have $10. The first person I met who wasn't like this, I married.

12. "They travel in packs. They form migrating goose-like formations as they walk importantly down city streets. You cannot break them up, and you cannot come between them — in any sense."

13. "They are always judging. Even if they’re much too diplomatic to actually say anything, they always have an opinion. They are always observing, making judgments, and deciding their next move. They can be the coolest girls in the world to hang out with, but you will always want to be just a little more on your game in their presence, because they will be judging. With love, of course."