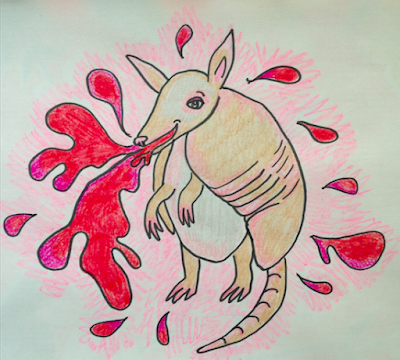 Last night Lindsey Baker and I had plans to see a show. We knew that these plans had been made between ourselves, and spent the majority of the day still knowing that. Meaning, we went about our individual days, together, knowing that we had a plan for that evening, and that plan was to go to a show.

As is often the case with us, the closer we got towards leaving for the show, the more we did not want to go. Not because we didn't want to see the show per se, but because we simply did not want to create a situation for ourselves where we were all of a sudden not in our house anymore.

Around 9pm or so, yesterday evening, we rode our bicycles to Saturn Bar, which is a place not too far from us that I had not previously been to, and Lindsey Baker had only been to once. Scheduled to play at this particular show were Plantain, Outdoor Velour, and Rudy Stone. We stayed for all three bands and here's what happened:

We were very excited to see Plantain because our new friend James Fenwicke is in the band. James gave us a ride home from a different show last week and aside from being a very nice guy who gives people rides home for no other reason than because it's a nice thing to do, he's also a very good musician.  Prior to his set, while we were all standing outside smoking cigarettes, we learned from James that the majority of the songs he'd be playing were entirely new. Right before starting up one of the new songs, James announced that the song was written from the perspective of a spider and then the following audience person + performer transaction took place:

Turns out the spider at hand was a Hillside Spider. It's also entirely possible that I completely misheard what sort of spider it was. Later I heard James Fenwicke say something about a California Newt.

The next band to play was a touring band from Indiana (aprox. 859 miles from New Orleans) called Outdoor Velour. The name of this band is oddly difficult to say out loud. They have a professional looking website which you can see HERE. The gentleman in this band has a mustache.

This band made a lot of different instruments come out of nowhere. During their set we snuck out for another quick cigarette and could have sworn we heard a jaunty saxophone solo, but no visible saxophone could be found. Outdoor Velour are musical magicians who evened out talent levels with visible happiness. We went so far as to suspect that they were perhaps on some sort of Kickstarter driven musical honeymoon. Isn't that nice?

The last band to play was Rudy Stone. Rudy Stone played a song called "Donut Money" and when he announced the title of the song Lindsey Baker turned to me and said "Joan Crawford?"

Rudy Stone reminded us a lot of Brooklyn. At one point during his set he said something about being from Brooklyn.

I read on the internet that this was Rudy Stone's first local show with an actual human band.

Rudy Stone also had a mustache.

After the show Lindsey Baker and I rode our bikes back home. We saw our neighbor out front of our house and he gave us a lime.