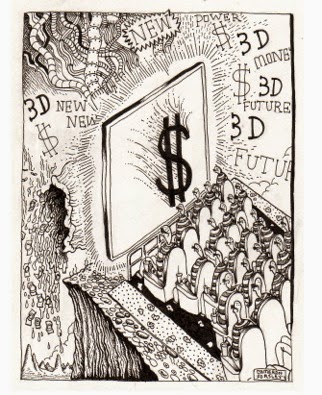 Stop turning all the good movie theaters with high-def screens, custom surround sound, and comfortable stadium seating into brothels.  By pimping out every movie showing in the good theaters, you're pushing out every quality film that refuses to turn 3D tricks.  Some will find spots in shit movie theaters with screens covered in the cum of its cracked-out clientele and alien-like sound that only NASA's best can interpret, and seats so creaky every film comes off as a Birds of Paradise sequel.  The rest will go straight to YouTube where a few hundred viewers will skip to the sex-scenes and comment with links to free toaster-ovens.

Even if a quality film makes it into a good movie theater without prostituting itself by adapting your 3D technology, it will still get fucked multiple times in multiple ways.  You and all your 3D whoring movies will ensure that it only has early showtimes, that it's out of theaters before the holiday weekend, and that it gets isolated to the janitors closet.  The aesthetically inclined audience, after packing into their seats like sardines, will share with each other the dirty mop odor that smells worse than their fishy selves and then drown, despite being fish, in the surround-sound splashing through the vents from the 3D whale in the theater next-door.

I know you recently adapted the Great American novel with the great Leonardo DiCaprio as the great Jay Gatsby and aren't concerned with letters from the likes of me, a mere viewer craving the good old days when I could watch a movie on the big screen without having to avoid 3D protrusions like a contestant on American Gladiators avoids Nerf balls, but you're not fooling anyone.  We remember when you, 3D Movie Technology, were working the slums of Disneyland hustling that Captain EO movie to little brats on vacation just like its star, Michael Jackson, used to hustle little brats into his bed when they were on vacation at Neverland Ranch.  And, if you don't learn to respect quality films, back to those slums you'll go to project that dancing space cadet to a bunch of churro stuffed Mickey Mouse faces for all eternity.

By respect I don't mean raping them with your 3D gimmickry and hoping they enjoy it.  The only movies that enjoy being raped by you, 3D Movie Technology, are the ones with such weak writing, acting, and directing that they can't get any attention -- from film-critics or movie-goers -- without you defiling them.  But the likes of Nightmare Before Christmas, Titanic, and Jurassic Park don't enjoy you turning them into 3D thrill-rides.  They're quality films.  Instead of raping them with your technology, you should have respected them by taking them to dinner, turning off your phone, and listening to what they had to say.  Every quality film has something to say.

Scarface is a quality film and it says, through the numb mouth of Tony Montana, that "In this country, you gotta make the money first.  Then when you get the money, you get the power.  Then when you get the power, then you get the women."  It's true that you, 3D Movie Technology, made the money with the record-breaking Avatar which gave you the power to rape Tolkien's solid little creation, The Hobbit, and now you're getting the women, all naked and horny, in the soon to be released Karmasutra 3D.  But Scarface also says, through its depiction of the rise and fall of Tony Montana, not to get fucking greedy.

And, by charging patrons extra to see your 3D whores, you are getting fucking greedy.  It can't cost more to make one of your oversized video games than it costs to make a quality film.  You just pay some nerds to sit in their pajamas and tinker with their computers, whereas to make a quality film everything from locations to stuntmen have to be paid for.  Movies using you, 3D Technology, don't even need professional actors because, even when they aren't pixilated holograms, they just stand in front of a blue screen and read lines off a monitor, which even the most expressionless of Alzheimer's victims can do.

So why the high ticket price?  Since it isn't needed to cover production costs, it must be needed to cover your outstanding advertising budget.  You wouldn't get anyone to see your 3D movies without carefully planned brainwashing campaigns.  Maybe the extra ticket price is actually a part of the brainwashing and meant to project an illusion of exclusivity -- kind of like Tickle Me Elmo in 1996.  But the only sense of exclusivity I get at your movies where real-life Tickle Me Elmos run laughing and shaking up and down the aisles trying to catch 3D bubbles or bats is what I'd get at an insane asylum for adolescent schizophrenic speed-freaks.

I wouldn't bitch about the extra cost of your tickets if the 3D glasses looked like Tony Montana's glasses and I could keep them, but they look like The Terminator's glasses and I can't keep them.  Even if you didn't take the 3D glasses back, only an 80s born Hipster would want them, and if you, 3D Movie Technology, are trying to cater to Hipsters, I got news for you: they go to movies you've never heard of, not your bubblegum thrill-rides.  Only adolescent schizophrenic speed-freaks go to your movies, and although I'm sure they love wearing The Terminator glasses, their chaperons do not.

Who do you think brings them to see your movies?  It's their loving grandparents.  Only a grandparent has enough free time and expendable cash to waste on a 3D movie.  If you were smart, you'd try to make these blue hairs happy.  But you are greedy, not smart. You refuse to sell them gin & tonics and you designed The Terminator glasses with no regard to their bad eyesight.  They can't wear their eye glasses and The Terminator glasses together.  They have to choose between them, between watching a blurry 3D movie or a 3D movie blurry.

If, 3D Movie Technology, you want to survive in this business and don't want to go out like Tony Montana, then you need to make some changes.  You need to start serving gin & tonics for the blue hairs, start pimping-out Wes Anderson movies for the Hipsters, but you also, for me, need to start utilizing your 3D technology differently.  I go to the movies to relax.  If I wanted to puke from motion sickness and fear for my life, I'd go to the County Fair and ride one of those spinning contraptions with loose screws.  And instead of having bombs blow up in my face, how about boobies bounce in front of it?

Ignore my requests if you want, but keep trying to get "the world. . . and everything in it" and what happened to Tony Montana will happen to you.  Maybe you won't snort a mountain of cocaine and then have a shotgun blast launch you off a balcony and into a fountain, but you will get sued out of all your money.  You'll get sued when a steroid-fueled husband, after swatting at 3D flies, finds his wife dead next to him.  You'll get sued when a stoner, after a 3D bowl of Cheerios is pored, chokes to death on his own saliva.  And you'll get sued when a child, after watching a 3D superhero movie, tries to stop a moving car.