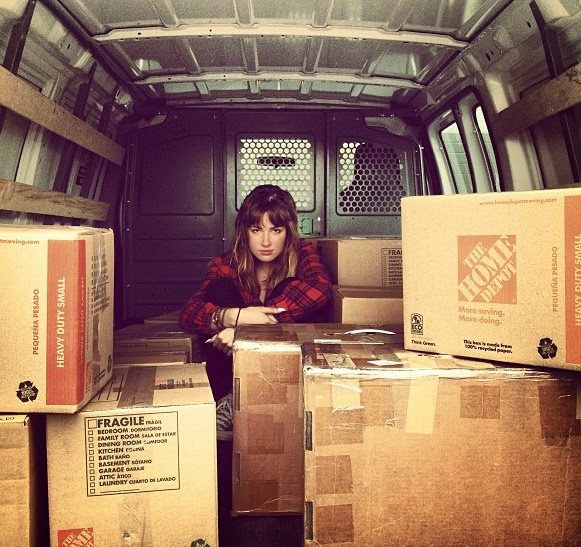 I recently moved to Los Angeles, however I spend at least two weeks out of the month traveling to Kansas City, New York, or Nashville to write, record, and rehearse my songs. It’s always interesting trying to explain what I do to people, especially in Los Angeles. I’m just one in a gazillion people out here chasing dreams. It’s pretty common for someone to say “I’m an artist, I act, I write, I perform etc.” The biggest difference between me and many other aspiring young females is that I don’t have a part time job, I don’t do ‘a little bit of everything.' I’m not a waitress (anymore). Plan B doesn’t exist.

I’m a 24/7 bag lady flying from place to place chasing creative moments. I have had so many part time jobs and gigs to stay afloat in this high maintenance life of being an artist and I realized I am completely content being utterly poor eating ramen for every meal while I chase my dreams.

When I had part time jobs my energy was compromised and I consistently felt like I was missing out on my calling. It’s not that I’m above working as a waitress, it’s that I can’t hold a job long enough without having to quit a month later, or without getting fired because I was in the kitchen writing down lyrics instead of taking orders. Whoops.

One of the most annoying questions I’m asked upon meeting someone is, “What do you do for a living?” It’s annoying for two reasons: First, we just met. Why in the fuck do I feel like you’re interviewing me? My answer is either going to disappoint you, I’m not going to measure up to your preconceived expectation for me, or you’re going to be interested and I’ll have to tell you more. That leads to the second reason it’s annoying: I’ll start explaining what kind of music I write, then I’m asked what bands playing on the radio I sound similar to, if I’m “signed," and then that person will try and connect me to the one other person in their life that does music and I’ll feel rude for rejecting the invitation and being uninterested.

That may make me sound like a bitch and maybe I’ll regret admitting this later. When I meet someone who is a mechanic I don’t try and persuade them to be friends with another mechanic I know just because they both work on cars. I think that’s a pet peeve for me because when I do share my music with someone and the first thing they do is imply I should meet their producer friends I feel slightly insulted as if the music I’m writing now isn’t good enough. That their friends could “make me better!”
Last week in Los Angeles I sat down with a gentleman buy the name of John Payne (LA WEEKLY, http://www.bluefat.com), who is writing a bio for me. I had a lot of anxiety walking in. Telling a complete stranger what I did for a living for a lengthy period of time didn’t exactly sound fun. What was he going to ask me? How could I convey who I was just by rambling on about my routines for over an hour? I walked into the cafe after sitting in LA traffic for over an hour, I was mad at myself for being late (as usual), my hair was messy and I wasn’t exactly having a cute day. He greeted me and we walked back to a booth that was tucked away in a corner so we could have privacy. The menu was a little overwhelming and I couldn’t decide if I was about to order a milkshake or a burger so I settled with coffee. That was a good choice as his recording device would have picked up my sloppy eating and I was thankful l made that decision.

After five minutes of small talk he pressed record and asked me to share my story with him. I began my normal script. “I’m 22, I’m from Reno, NV. (Yes, like Reno911)  I’m a singer songwriter. I write pop music but it’s a little alternative. I want to perform at the Super Bowl one day, uhhhhh yeah what else?” I was pleasantly surprised when he interrupted me after 30 seconds and said, “I know what you do. Tell me about you.” WOAH, you wanna know about me? I didn’t know where to begin. For so long being an artist was just my identity. I didn’t really know what to say. So many areas of my life I thought were ugly, embarrassing, or just simply uninteresting. I reminded myself that he was a stranger and chances of me seeing him again were slim so I fired away. I thought about 10 minutes would be enough and by then I would have either scared the shit out of him and we’d wrap up or he would be intrigued and my real story would be told.

I told him about my childhood, my brothers, my marching band days. I told him about being in a band and opening for Paper Tongues and Neon Trees when I was 16 and how that night has shaped the rest of my life. I could feel myself starting to open up and as the minutes passed by I was beginning to feel like I was talking a shrink, one that I actually wanted to talk to and not one my parents sent me to. It was in that moment where the F bombs and sailor vocabulary started to fly out of my mouth that a young family sat down at the table right next to us even though EVERY table in the restaurant was available. I tried to put a filter on it because I didn’t want to freak the youngsters out. I wondered what they were thinking. Who is the odd pair next to us and why is she just rambling on and on about rock shows and why is she speaking with her hands so much and maybe she’s his call girl that he just pays to talk loudly next to him? Ha. Whatever.

At this point I was sharing with John my experience being on The Voice and how that show made me feel a like a money puppet. I felt like my artistry was compromised while being on The Voice and I never experienced anxiety or self-doubt until being on that stage. The show did not portray me as the woman I am and even though I thought it was a great opportunity for exposure and a chance to break into the industry I’ve had to do a lot of damage control since then. I explained that my addiction only got worse on the show, at that point I tried to speak softly because I didn’t want to set a bad example for the children eating their nuggets beside us.

John was pretty quiet the first 15 minutes and as I started to open up I think he was shocked at how different I am in person. He said, “You are not that girl on The Voice." That was the nicest compliment.

It was so refreshing to share with someone, even a stranger, my story. I think every artist should be able to have a conversation with someone like that, at least just once. It reminded me of who I am, how far I have come, and how close I am to achieving what it is I want. It’s easy to feel like I’m just playing the lottery every day hoping my number gets called, and that I don’t stand a chance at all. Everyone wants this. I have always dreamed so big that I assume everyone else’s dreams are just as big as mine and/or the same. Before I was able to embrace being an artist I’ve had to embrace the person I am.

Suddenly all of my pet peeves about people asking me what I do had vanished. I had just shared so much with someone that was just me. It wasn’t for a television show; it’s not a reality cattle call. I don’t need to meet anyone’s expectations or worry about what people think of me. If people think I’m crazy because I’m an artist, good. They should, because you have to be crazy to do what I do. There’s some good in some crazy. My meeting with John at the diner was an eye opening experience. Plus, now I can say I have a new friend (hopefully fan) in Los Angeles.

@AudreyKarrasch
Posted by TOTAL BOZO at 8:50 AM