Curly Penny Squeezed Feminism Out of Her Feminist YouTube Channel 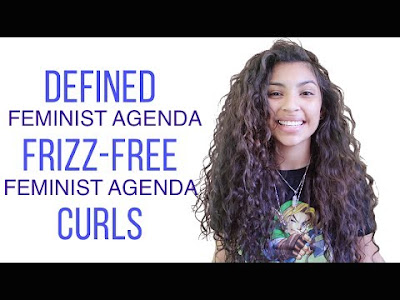 I have a lot of time on my hands. I have a lot going on, work/hobby wise, sure, but it mostly takes place online in some way, which means that I have many opportunities to be distracted by random nonsense, which is the mailing address of "The Computer."

So yeah, sometimes, while working on things, I'll get these brain tics that will tell me I absolutely HAVE to search for something online at that VERY minute. It could be:

HEY! HOW LONG DO GOATS LIVE?!

HEY! WHERE IS LOUISIANA ON THE MAP?!

I decide to search for any manner of random nonsense, and then I search for it, and then I go back to work. None of it really effects my day in any lasting way. It's mostly like internet  Tourette's I get an all-consuming urge to do something, I do it, and then do something else. But about a week ago, while searching around for curly hair maintenance random nonsense, I came across something that changed my life for upwards of two weeks +

I have curly hair. Like really curly. Like I basically have a sheepdog on my head. I have the hair of three actual people. It mostly sucks to have curly hair, and like most other curly haired people, I've fought having it for almost my whole life. I've straightened, tried to shave underneath it, tried to cut it into all different sorts of formations, put all manner of expensive goop in it, and relied heavily on hats, and anything else that would just cover it up and make it unseen as much as possible.

Having lived in New Orleans for about three months now, I'm feeling a little less uptight. In general. Something about the general "vibe" here makes me take things a little easier. So lately I've been exploring ways to just let my hair be curly and wild and free and I'm Every Woman, etc. In this mindset, searching around for random nonsense online, I found THIS. 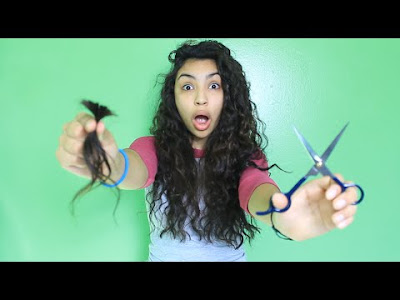 Curly Penny (real name Peniel Tovar) is a 20-something girl who has a YouTube channel featuring several dozen short videos mostly about curly hair maintenance. As of today, the channel has 72,143 subscribers. Her Instagram has 8,355 followers. From afar, it would seem like a YouTube channel such as this would not interest me in any way, especially any sort of lasting way, but something about Curly Penny drew me in and kept my interest.

While initially I got caught up in her hair videos out of personal need/interest in finding ways to improve the look of my own curls - even going so far as to take down names of products/items she suggested and buying them later in the day, which makes me the ultimate, most susceptible type of consumer there is - I started to get something out of the overall message of body positivity/general positivity that her videos included. Here's an example

She's helpful, she's self-deprecating, she's relatable. All in these ways where after a few videos I was like "this girl sets a great example for young girls and I'm glad she's out there doing this." I watched her videos like daily meditations, and I imagined other young (and young-ish) women doing the same. For a couple weeks I was happy to have this easily accessible outside source re-affirming certain points of positivity that I, under all the crust and calluses my brain and heart have acquired through the years, would like to bring more of into my life. Then, in her most recent video, I was reminded that it is super important to rely SOLELY on yourself for these sorts of affirmations, because everyone is full of shit, to some degree, and the only level of shit you can fully and completely monitor is your own. 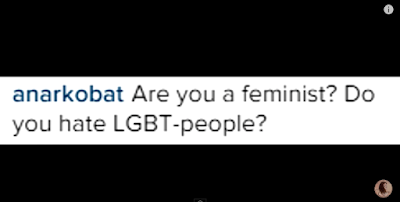 By dropping this bomb:

Now, this question came towards the end of the video and was preceded by questions involving body positivity, not feeling the need to wear makeup, and not feeling the need to shave body hair. I felt actual shock hearing her answer such positive, feminist questions, and then follow it all up by saying she doesn't support the "agenda" of feminism. Regardless of age, cultural background, or whatever else, it should be brought to light that having a format such as this to provide advice for young people, and then ripping the rug out from under the years of struggle that led to her being able to have hairy legs, not wear makeup, and yet still be seen as someone "worthy" of having a YouTube channel, is extremely toxic.

What she's doing, and what she's saying in her videos, IS feminism. But now, instead of teaching people the underlying beliefs and benefits of feminism through practice, she's essentially robbing herself, and others, of the word. Or rather, replacing the word "feminism" with another phrase she uses often in her videos: "Body Positivity." Which wouldn't be one thing without the other. Primarily, out of all the many definitions and ways to describe it, feminism is about being worthy. Worthy of equality, worthy of being able to do whatever the fuck you want with your own body, worthy of being heard, and of making your own decisions.

Feminism, by any other name, is still feminism, so why not call it what it is? We've come a long way, (Penny) and we really can have it all. Please don't be another public voice telling people that it's not the case, or that it's not something of extreme value, or else you truly are "just another pretty face."