I bet you’re not one of those people who actually gives a shit about these professional running back guys. I bet you’re just some asshole who threw $20 into a pool with your buddies, and you just want them (the professional running backs, not your buddies) to run around with a football and get enough yards and touchdowns to win you money. I bet you don’t even care if these running backs get hurt, if their legs and backs ache and they spend the rest of their lives walking like a Frankenstein(‘s Monster) in constant pain, their brains turned to mush, grinning haplessly at the family they no longer fully recognize at a barbecue from the relative comfort of a hemorrhoid pillow placed atop some relatively nice lawn furniture. Nope, in the here and now, if these guys got you enough points to win your fantasy football league, you’d be just fine and dandy with that tragic future family barbecue arrangement, wouldn’t you, you sick fuck?

Of course you would be okay with that. We all are okay with this. We, along with the “powers that be” we have elected through our collective silence to allow another year of football’s spectacular barbarism.

Here are the top running backs of the year, according to my own proprietary system which is important and blah blah who cares: Le’Veon Bell has been suspended for the first two games of the year for a DWB violation. The Ross Township, PA (population: 94.0% white) cops booked him for possession of weed, and he also apparently qualified for a DUI, which actually is not okay at all, even though it’s less okay when some drunk white businessman drives his ass home to the suburbs after happy hour and the cop gives the guy a break even though he’s acting like a twat because he “seems like a good enough guy.” If you account for the fact that you’ll be drafting enough running backs to have a backup in place for the first two weeks, Bell should be the best running back. He’s great. Please don’t drive drunk, Le’Veon Bell, and I say that not so much because it’s morally wrong, though it is, as because drunk driving is a sign that you might not be taking very good care of yourself mentally and emotionally, and I would hate for that to be the case. 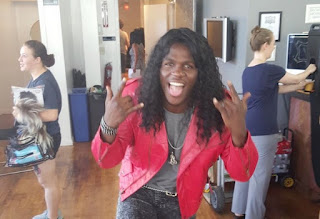 A few weeks ago, Jamaal Charles gave a speech at the opening ceremony of the Special Olympics, which he competed in as a child. It’s hard to tell which is more touching: the content of the speech, or the fact that he made the speech. Watching it is like overdosing on human kindness and dignity. If that is not enough to make you love Jamaal Charles forever, there is also a three second video on NFL.com in which Jamaal Charles reveals that his favorite food is Sloppy Joes. 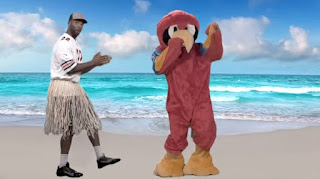 It is sad that, while looking for information about running backs’ personal lives, you end up hearing salacious details that are none of your business. Forte completed his finance degree from Tulane a year after having already turned pro, which is admirable, and once came in second in a NFL players video game tournament, which is the kind of non-information that only becomes information if the people involved are famous, and also Matt Forte had a past relationship end embarrassingly. Sometimes you Google these guys to learn more about who they are as actual people, and the biggest thing you learn is how glad you are that nobody made you a Wikipedia page. 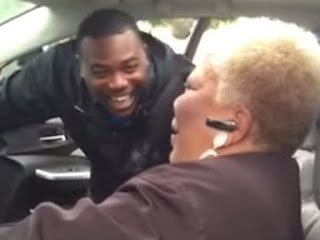 C.J. Anderson was not drafted by any NFL team in 2013, and now he’s doing great. All of these guys work harder to be good at football than I’ve ever worked at anything in my life, and C.J. Anderson must have worked extra hard. He was interviewed in the Colorado Springs Gazette yesterday, and had nice things to say about his teammates in the Denver backfield, which to me is always amazing. Nobody wanted him in the draft, but he caught on with the Broncos and worked his way onto the team, and still he’s gracious about sharing a roster with two more highly drafted backs who probably bitch and moan under their breath all day long about wanting his job. 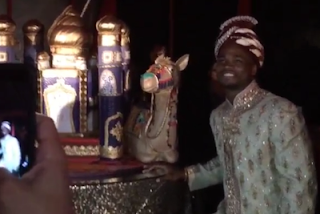 “The horror we have about hitting kids in America is certainly not shared throughout the world. So black people are not particularly original. But African-Americans are by and large, not wholly, Southern people. But in addition to hitting their kids more than whites at every socioeconomic level, period, they are just harsh on their kids, and I think in large degree that is a response to the fact that they know there is significantly less of a shot at a second chance. You can pay with your life. The consequences for black folks are so much higher. And I think folks are resolved to scare the hell out of their kids. Having said all that, and it’s important to say all that, I told my son recently, and I hit him four times, that if I had to do it again, I never would have hit him. I just wouldn’t have done it. It’s still violence. You are perpetrating the thing you are trying to get them to stay out of the way of. I was young when my son was born and I was scared as hell that he would wind up a drug dealer or in prison or whatever.” – Ta-Nehisi Coates 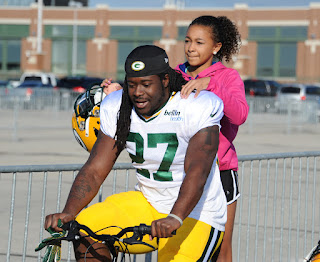 Eddie Lacy is a former Hurricane Katrina refugee who appears from his Twitter feed to be one of the more approachable, genuinely fan-appreciative stars in the NFL. I recommend that you look up as much personal information as you can, good and bad, about the people you draft on your fantasy team. You will be brought to tears more than once. Anybody who has the kneejerk reaction to say that these guys are all pampered millionaire jerks is going to be wrong more often than not. Sure, there are pampered millionaire jerks in the NFL. There are also people who’ve had incredibly difficult lives with no healthy role models or coping mechanisms. Ray Rice, for example, grew up without a father because his dad was murdered. Very few people are still jerks even while they are actually feeling good. Pain comes from pain. But Eddie Lacy seems like just about the nicest guy around, even though a hurricane forced his family out of their home when he was a kid. 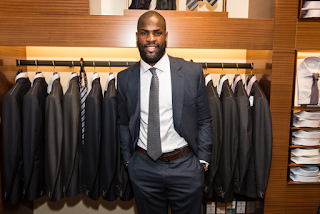 DeMarco Murray got married in June, and a “lifelong Cowboys fan” who calls himself Drake (no word on whether or not it’s THE Drake, but if it was that would not be surprising, like, at all) crashed the wedding. Like in a spur of the moment “oh weird, we are dressed up for a different wedding down the hall at the Dallas Four Seasons, but LOL let’s sneak into DeMarco Murray’s wedding” way. DeMarco Murray thought it was funny. I guess he’s kind of right that it’s funny. But it’s also creepy. Other thing I did not know about DeMarco Murray: DeMarco Murray looks good in a suit. I still look like the one confused goy at a bar mitzvah when I try to wear a suit. 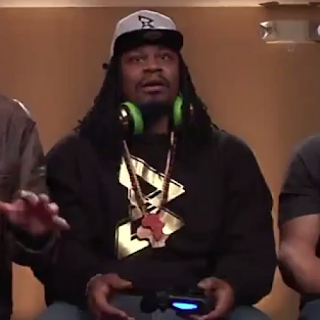 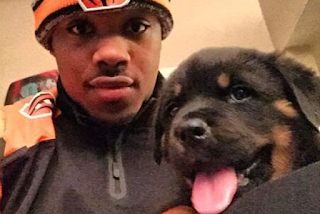 Some things I just learned from Jeremy Hill’s Twitter feed: Hill is a fan of Drake’s music, he reps his alma mater, LSU, pretty hard, he has a dog named Kobe that looks like a Rottweiler, he likes to laugh and dance, and he likes things from Cincinnati that are awesome. If I ran into Jeremy Hill, I would probably try embarrassingly hard to make him think I’m cool even though I am not cool. 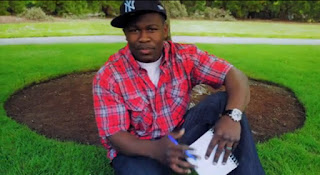 Justin Forsett is a devout Christian, but according to devout atheist and former teammate Arian Foster, he’s one of those Actually Christian Christians. That’s nice. It’d be pretty nice if all Christians were actually Christian about their Christianity. I’d be like “oh, wait, these guys all have a very good point about how to be alive” instead of “complete opposite.” 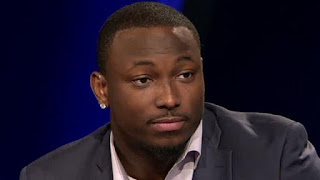 McCoy (pictured above with a "why would I be lying" face) accused his former head coach, Chip Kelly of the Philadelphia Eagles, of racism. Is Chip Kelly a racist? Of course he is. All white people are racists. You may be thinking “not me!” Bullshit, dude. You are a racist. Remember how you live in America and nobody ever enslaved or eradicated your ancestors, erased your family’s history, or threw an entire generation of people who look like you in jail? Of course you’re a racist. I hate to be the bearer of bad news. You’re just going to have to be wrong about this one, and soak up that wrongness, and let it live inside you and guide you in the direction of empathy and compassion for your fellow humans. You know, like how Buffalo head coach Rex Ryan does it. (tugs collar) 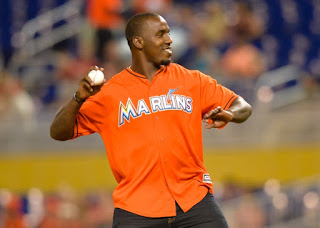 Not really seeing anything of interest from or about Lamar Miller. I also hope he has a productive day. That’s a nice thing to hope for somebody. Maybe it’d be a little more reasonable to say “I hope none of you guys totally flip out and lose it today,” since life is hard, but productive is a perfectly nice wish to add on top of not flipping out and losing it.

Other Running Backs of Note:

Frank Gore, Mark Ingram, Alfred Morris, C.J. Spiller, Andre Ellington, Melvin Gordon, Todd Gurley, Jonathan Stewart, LeGarrette Blount, Rashad Jennings, Latavius Murray, Joseph Randle, and Devonta Freeman are all also some running backs who seem at this juncture likely to be “starting caliber” in fantasy football, and they are all, also, human beings. They were once babies. Somebody once held them in their arms and thought about how nice of a baby they were. Since then, they’ve have their guts more or less torn out by the world, just like the rest of us.

If you’re actually trying to get fantasy football advice here, that is a very weird decision on your part, but I’d say that it’s very likely that at least the first eight guys listed above will go in the first round of any given fantasy draft, and everybody else not in the “Other Running Backs of Note” section would be a delight to draft in the second round. Then sprinkle the “Other Running Backs of Note” as needed, then draft Guys You Like For Whatever Reason. I don’t know. What do you want from me? More importantly: what do you want from them? They’re just guys.