My Eyes Are Bleeding Pizza Sauce 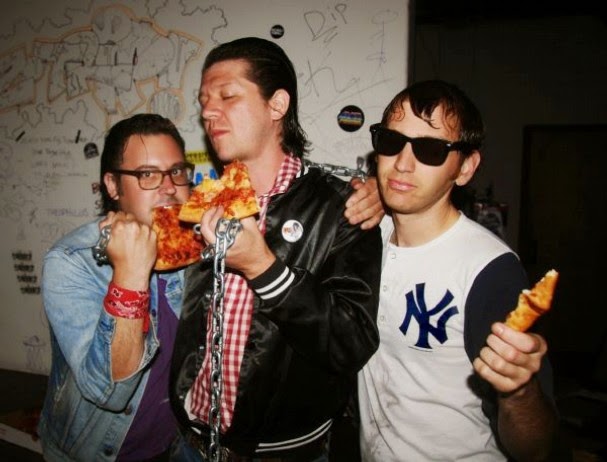 I’ve been bombarded in at least a couple of ways recently about the summer festival circuit this stupid Velvet Underground pizza band that erstwhile child actor and current party trash socialite Macaulay Culkin is in, and I want it to stop. It’s killing me. I hate it. Every time I hear about any Pizza Underground anything, my sternum tightens and my blood pressure spikes and my neck muscles double in size. This world is a travesty. We do not deserve to be alive. We are wasting countless minutes of our lives and precious server space on this clown and his stupid clown band. This must end.

I don’t feel this way because the Pizza Underground is a bad idea. Of course it’s a bad idea. Bad ideas are great. I love bad ideas. The Pizza Underground, on the surface, is a fantastically bad idea. It’s also the wrong bad idea. Problem is, I got a better bad idea. They’re called Personal & The Pizzas, and they were covering The Stooges AND The Ramones AND writing songs about pizza back when Lou Reed was still alive to spin in his grave and Macaulay Culkin was busy getting dumped by Mila Kunis. Their music is real and raw and mighty and all kinds of the best, and they will put Culkin the ground, figuratively through sonic explosions of fury and literally through brass-enhanced fist punches (and fake lawsuits).

Aside from the facts, that Personal & the Pizzas are a better band than Pizza Underground, and that Personal & Co. originated and then also immediately surpassed the constraints of the pizza band framework (listen to “I Ain’t Takin’ You Out” and tell me it doesn’t belong in whatever uber-elevated echelon of punk songwriting we’re keeping the Electric Eels), makes more aesthetic sense to do a Stoogoid/Ramoneoid pizza band than it does to rework Velvet Underground into a pizza format. When Iggy Pop sang “last year I was 21, didn’t have a lot of fun,” you can practically hear an entire year’s worth of unsatisfactory pizza rotting in his gut. When The Ramones told us “Now I Wanna Sniff Some Glue,” the context of “because I just took care of a whole fuggin’ pizza” is implied.

In contrast, Lou Reed wrote erudite songs about heroin, and waiting for his heroin guy, and like, “what costume shall the poor girl wear” and shit. Lou Reed needed people to know he was a poet, and his songs did not eat pizza. His fashionably emaciated songs subsisted solely on stolen honeydew melons and Benzedrine and society pussy, and whatever atmospheric pizzaness might have accidentally spilled on the Velvet Underground via gritty New York-centric depictions of urban decay and debauchery is more than adequately obliterated by the effete Welshman on electric viola and whatever soybean enema agenda he seems to be pushing with his black clad cross-legged aloofness.

The Velvet Underground were great, maybe even the best, but they were not a Pizza-y band. If you want to cover the Velvets and make those songs about a favorite street food, I’d suggest tacos. Tacos are mysterious. You cannot see what's in them and hold them for eating at the same time. They're quantum food. Or, like, crêpes. You could dress up like French mimes and sing Velvet Underground songs about how much you like Nutella on your crêpes. I'm pretty sure that's what Nico was actually doing. Or, fuck, ice cream. I’ve been off booze for over 2 years now, and I am qualified to tell you that ice cream is basically heroin. It’s my wife and it’s my life.

Pizza and the Velvet Underground don’t go together, is my point. And Personal & The Pizzas are a way better EVERYTHING than Pizza Underground is also my point. And another point that's mine is that Macaulay Culkin is a party clown who landed on a funny hustle, and as such I hope he and his band get dragged through the trenches via merciless booing everywhere they go by people who “just don’t get the joke” but actually do get the joke and the joke is we’re all here lining Macaulay Culkin’s pockets with drug money so we might as well have a go at him while we’re at it. You can try that “boo” shit on Personal & The Pizzas, you’re dead meat, friend. They might be dedicated to pizza-centric songs and thiefed riffs, but they ain’t no joke, and if you laugh they’re gonna crush your skull and not go skulking off to cry on their publicist’s shoulder.

Maybe I’m taking this too seriously, but this is serious business. We can’t just let America’s greatest natural resource, rock bands which play songs about pizza, be monopolized by the celebrity party dickhead culture, who will decimate the fertile creative ground of pizza rock with scorched earth oversaturation publicity campaigns. This fucking guy is playing Velvet Underground songs about PIZZA as a means to claw his way back into the limosine where he feels he belongs. He is destroying at least five or six good things, here, most importantly the future of some otherwise pretty with-it kid who doesn't want to listen to Personal & The Pizzas because he's been misled by TMZ to think they're the derivative ones. This should be upsetting to you.

Nobody’s gonna do this for us, people. It’s fun to gawk at these Pizza Underground losers, but we all have to try our best not to. If we’re going to affect real change in the pizza rock community, we must join together and demand that our songs about pizza be played by regular working-class party dickheads who can’t afford the good drugs. Because THAT is the sound of pizza. This is life or death, people. This is important.