The What Are You Even Talking About Guide to Audio Equipment 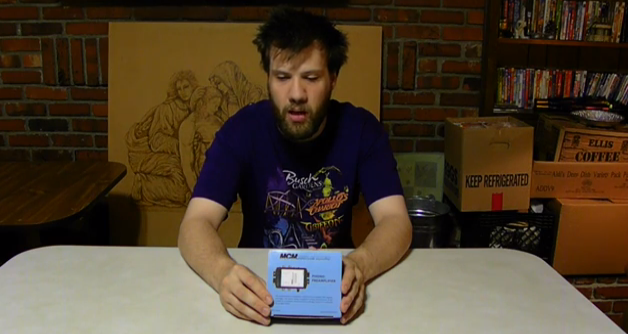 I have recently burdened myself with the pleasure of wanting to learn more about audio equipment. I want to learn more about audio equipment so that I can buy THE PERFECT things for my PERFECT home entertainment system. And by home entertainment system I mean the corner of my apartment where I keep my music diddles and album ding dangs.

I have always loved music, but I don't have all that much of it just laying around. I have an iPod stuffed with stuff that I scroll past to get to Beyonce, and I have about two dozens albums that I keep around because they're funny, or remind me of when I was growing up, or are orange/blue/red/swirly. I also have two cases of CDs that my girlfriend has asked me several times to hide in the closet. The reason I don't have all that much music in my possession is because I have previously spent many years as a music critic where I was conditioned to have the response of "EWWWW NO, GET THIS AWAY FROM ME" whenever I was handed an album. But now I want them. I want them all. And I'd prefer that they don't sound like they were recorded inside of a bubble gum bubble filled with farts bouncing around inside of a Pepsi can.

My system currently consists of:

- Some record player I bought because it looks old.
- Some fancy speakers I was given at my old job and then asked to return and then I guess kind of stole.
- A CD player that a friend gave me a few years ago that looks like something Patrick Bateman would play his Huey Lewis CDs in. It loads from the top and glows blue.

Everything seems to be placed wrong, hooked up wrong, lacking a component that I'm convinced is the top priority component that I need to immediately go spend all the money I have on. And you would think that with the endless pit of information found on the Internet I could easily sit down in one afternoon and get all my hobbyist music playing for leisure concerns ironed out. But all of the information to be found comes from some one who is basically this guy:

I found this guy by trying to Google what the hell a preamp is and if I need one, and now I have so many more questions.

You absolutely need to watch this video, but as a supplement, here's a transcription:

I'm sorry. This was a horrible idea.