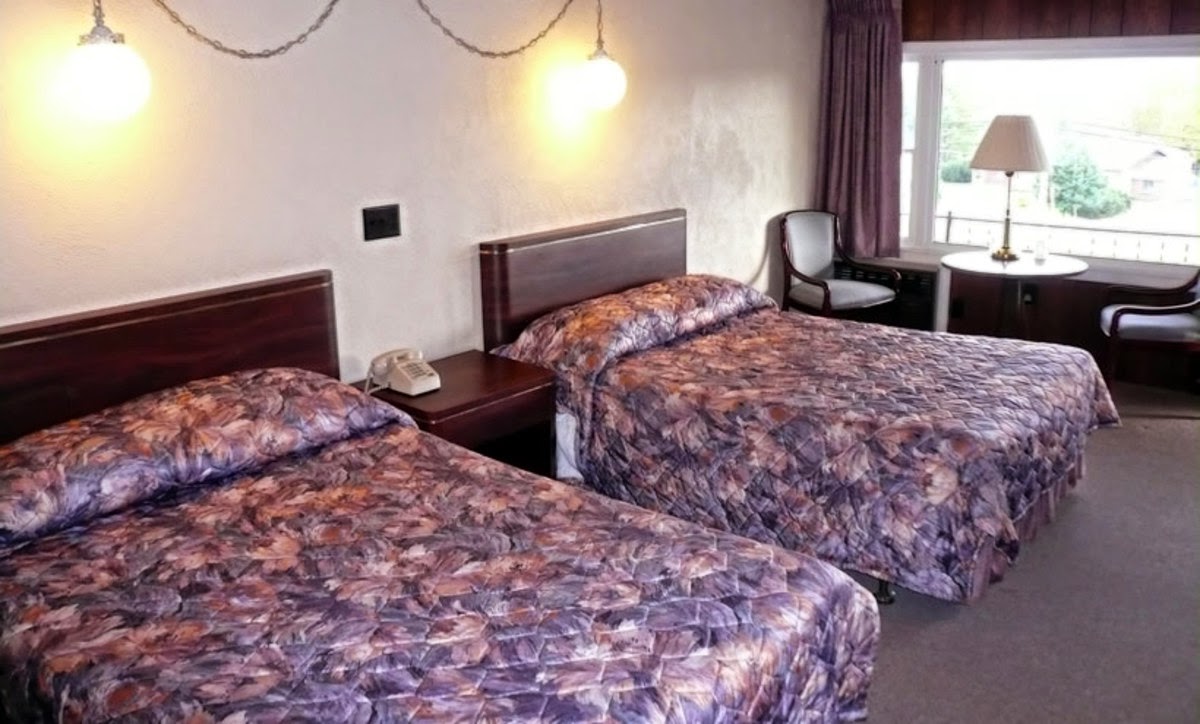 Whether you have been out on a typical family vacation or trucking from gig to gig, chances are you have been driving for hours and hours and stewing in a pool of caffeine, nicotine and your own body funk; on a good summer day, your crotch by itself could be a scummy, slime pit warranting a rating from the EPA as a potential Superfund site. What you need is a shower and a nap to feel clean and refreshed. You finally pull into the big parking lot in front of the classic, two story Stalinist rectangle of a building(s), and quick as your nearly paralyzed legs can haul your carcass, you head to the front desk of whatever discount motel/hotel/motor lodge you’ve given into staying at. You can’t wait to pay for the room, get your key and head to a little peace, quiet and a hot shower. After entering the nondescript beige walls, two beds and imitation wood grain furniture that have been cloned millions of times all over the world, the door closes behind you like a cheap vault. Dropping your bags, you immediately fall back onto the bed . . . just like in the commercials. Congratulations, you just made your first mistake, and no amount of bathing can wash away the taint and stain of lying down on one of the vilest textiles on the planet, the motel duvet.

Aside from a homeless man’s raggedy, fart sack of a bed-roll, that thick comforter (duvet) you just did the Nestea plunge into is in fact one of the most rancid and disgusting pieces of cloth on the planet. With a homeless dude’s bedding, there’s only one scumbag that’s wrapped up in his scumbag on a nightly basis. You can’t say the same thing about motel room beds. Come on, it’s a hotel room, and you know what happens in hotel rooms, right? It’s possible you may have even participated in a few evenings at a Motel 666 that not only flaunted the laws of the state but also the laws of God, nature, good taste and decency. And, what happens in hotel rooms, like Vegas, stays in hotel rooms and more importantly on motel room duvets . . . especially pecker tracks, pussy goo, lice, crabs, scabies and santorum.

Maybe in the past you’ve heard horror stories about the seedier aspects of life like the old Pussycat porn theaters or the jack booths in the back of sex-shops, held your nose up and scoffed at the wizened, creepy perverts and their desperate, public sex antics amidst the multitudes of spent shots of feral man-chowder all over the floors, walls and seats. Holding your head high, you proudly think, “Thank God, I’ve never sunk so low as to put myself into such heinous and potentially disease ridden environments.” Unfortunately, you did right when you laid back onto that multi-colored spunk and STD sponge covering the motel bed. At least the jack booths at the sex-shop get mopped out a couple times a day; that can’t be said about the comforters at not only the budget motels, but even some of the fancier joints.

Even though the illusion is crafted by the armies of housekeeping staff that the room you just rented for the night has set idle and clean just waiting for you and you alone, chances are that some fairly twisted shit has gone down in those four walls and probably in the very recent past. If you have ever gotten a 3AM phone call from some spastic space monkey so tuned up on gack that he sounds like the light speed legal warnings at the ends of car and bank commercials, and he’s looking for someone named “Speedy,” you’re guaranteed that major crimes and debauchery were close enough on the clock to smell – if it wasn’t for the chemical based air fresheners deployed that morning that are also used in crime scene clean up. Partial crime scene cleaning is almost part and parcel to the job of those mostly immigrant domestics who are “stealing your jobs,” but the hotel chains try to make that aspect a bit easier to cover up by the choice of patterns on the bedding.

There’s a good reason that the duvets in these rooms look like some darker Disney smeared nightmare; that way you can drunkenly spill a pizza, seed and/or a hooker corpse on them without being able to notice the stains as easy, and it makes it so they don’t have to continually launder them. Matter-of-fact, unless it’s stated as a selling point, some chains only launder their comforters once or twice a year, you know so they can be “eco-friendly” which is a nice way of saying “cheap bastards.” If a whole year, or even six months, of crack head, hotel based abuse between cleanings doesn’t make you want to boil yourself after touching one of these things, then you’re made of tougher stuff.

The unsavory nature of this infamous bedding was first brought to my attention several years ago while touring with my dirt-rock band Genghis Con Job. Whenever we hit our hotel room (four of us giant bastards would stay in one room), the first thing Frank Drank would do was rip the duvets off the beds and throw them into the corner of the room with a look of disgust on his face like he had just shook hands with a leper. Considering the heinous shit I’ve watched and sometimes participated in with him and the other band members, I found it kind of amusing that he suddenly looked like a giant, bald headed and bearded girl who had just seen a rat in the corner. I should have taken this as a clue. Frank has toured with major professional bands as a road manager and picked up this tip from none other than Ice-T himself, and it’s not like T is staying in the fucking Motel 6. At the time, I just chalked this up as a conspiracy theory, but I was wrong. Conspiracy theories need outrageous premises of multiple hidden shooters or radio remote controlled planes piloted by faceless cabals of black hats and the money men that issue their marching orders. Fucked up bedding just needs party people and cheap, corporate bastards trying to save a few bucks on soap and hot water.

At this age, I should know by now that common sense and wisdom are learned experiences garnered through years of collected knowledge. Unfortunately, I have to see something written down or shown on TV by “experts in their fields” for me to believe it. A few days ago, while watching some crime investigation show on one of the “info” channels, I learned these horrible truths about motel duvets from none other than a forensic criminologist. While working a rape and murder at a motel, they tried to find DNA from the rape on the motel room’s bedding, specifically the duvet on the bed where the rape had occurred (the murder occurred elsewhere). Yes, they found male DNA, 38 different types of male DNA along with a couple of dozen different female DNA specimens. When they ran the florescent light over the comforter in question, it lit up like black light Jackson Pollock painting.

At the time, this was one of the first cases of a hotel murder that the criminologist in question had worked, and he was shocked to find out that these duvets are cleaned sometimes only once a year. Now, he knows better both for his profession, and, he said with a knowing smile, for when he has to travel to completely remove the duvets and throw them off to the side, wearing gloves if possible. I’ve stayed in my fair share of hotel rooms, and this knowledge gives me a slight case of the heebie jeebies at the thought of how many of these vile bed covers I slept in or napped on. A coffin full of wormy dirt from Dracula’s homeland now seems cleaner to me. As they are so unclean and wretched, had motel duvets been around in Biblical times, without a doubt, there would have been some protestations in the Good Book against them, probably sandwiched into Leviticus between all of the saber rattling for slavery, prohibitions against pork and homosexual hating. As far as these woven DNA receptacles are concerned today, I’m reticent to even touch one to remove it from the bed without wearing a Level Four Hazmat Suit, but if you decide to lay down on one, why don’t you just you go in the bathroom and tongue the toilet seat while you’re at it because you obviously have some Klingon genes and are a firm believer of that which doesn’t kill you will only make you stronger.

To read more from Patrick, visit HERE.
Posted by Unknown at 8:47 AM