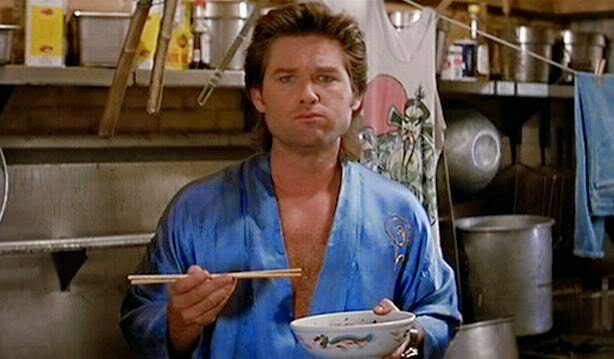 I was sitting at home a couple of weeks ago, watching Big Trouble in Little China for the eight trillionth time, (For this viewing I learned Chinese, so I could make sure the film makers got the details correct. John Carpenter is known to be as precise and exact as Stanley Kubrick when it comes to what appears on screen.) when it hit me: this Jack Burton guy has his shit together more than it appears at first glance. He’s a guy who really knows where his towel is.

Upon further reflection, I realized that Jack Burton (the main character in this flawless masterpiece) approaches life from a very well-defined point of view. He’s a man who has spent years in his truck, traversing the highways and byways of this great country (America?) hauling the sundries that we all so desperately need. Were you able to drink coffee this morning? You can thank Jack Burton for that. Is your lawn well-manicured? It’s people like Jack Burton who smuggled the immigrants into your neighborhood for that very purpose. Did your life-sized John Holmes “Xtra Veiny” black dildo made from Space Age polymers (and Bluetooth enabled) arrive on your doorstep this week? That’s right, Jack Burton once again.

It was during his time on the road that a well-worn and time-tested philosophy formed for Jack. And he loves to share this philosophy with others. He spends the majority of his time in his truck giving advice and life lessons to his fellow truckers. All of it from knowledge and experiences gleaned from years of being a rig jockey. Nobody asks him to, but you can be damn sure everybody within earshot of a CB radio sits in rapt attention whenever Jack Burton’s pitchy voice comes over the speaker.

And his words! The things he says can really open your mind. From the existence of life on other planets:

“Well, ya see, I’m not saying that I’ve been everywhere and I’ve done everything. But I do know it’s a pretty amazing planet we live on here, and a man would have to be some kind of fool to think we’re alone in this universe.”

To dealing with adverse weather:

“Just remember what Ol’ Jack Burton does when the earth quakes, the poison arrows fall from the sky, and the pillars of Heaven shake. Yeah, Jack Burton just looks that big old storm right in the eye and says: ‘Give me your best shot. I can take it.’”

“When some wild-eyed, eight-foot-tall maniac grabs your neck, taps the back of your favorite head up against the barroom wall, looks you crooked in the eye, and asks you if you paid your dues; you just stare that big sucker right back in the eye and you remember what Ol’ Jack Burton always says at a time like that: ‘Have you paid your dues, Jack? Yessir. The check is in the mail.’”

“Like I told my last wife, I said ‘Honey, I never drive faster than I can see. Besides that, it’s all in the reflexes.’”

And sometimes he says stuff that has absolutely nothing to do with eyes or vision. But not too often. Any thoughts involving eyeballs or sight are squarely in his wheelhouse. 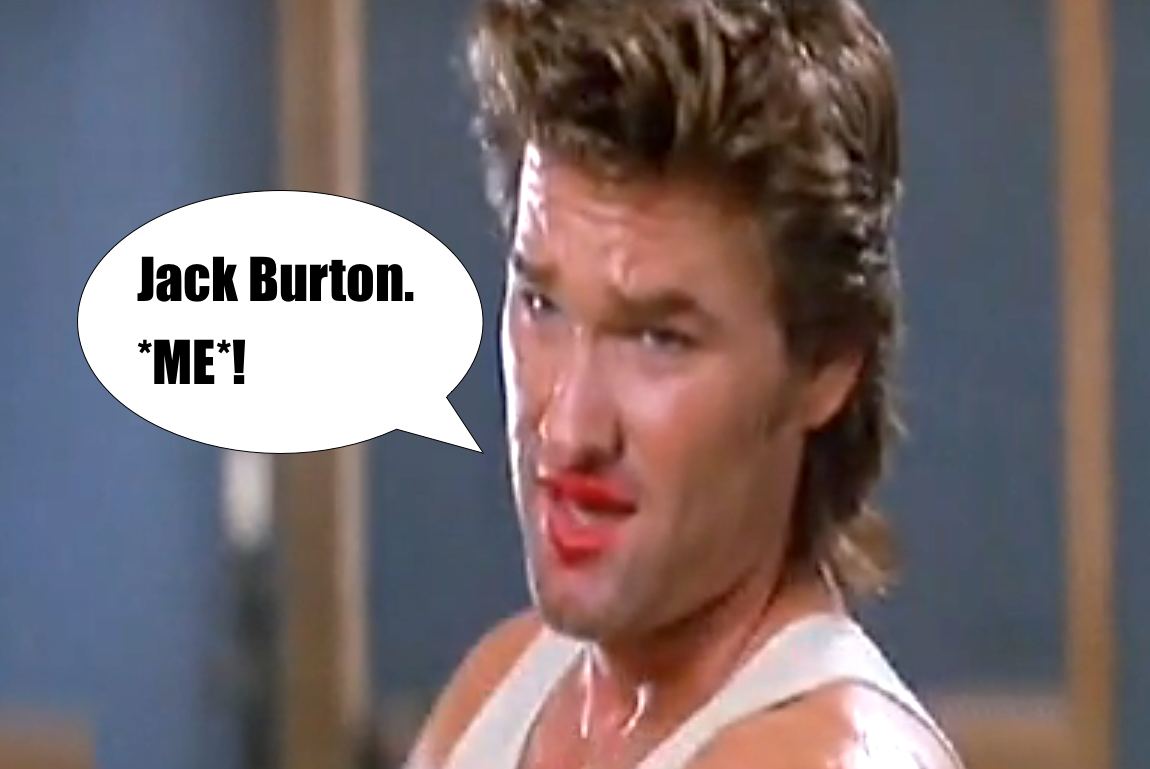 His attitude on life is so refreshing and unique. His method of coping with setbacks, from his truck being stolen to having to fight demons from the underworld, is to shut up and just get it over with. Sometimes without shutting up and usually without actually getting it over with either. But it never really matters in the end, because things work out for Jack anyway.

Thus inspired, I decided to apply Jack Burton’s lifestyle to my very own, to see how a day in his vaguely racist tank top, unnecessarily tight jeans, and stylish boots would suit me. But without having to wear any of that stuff, because come on.

The next day I drove in to work. I don’t actually have a CB radio in my car, but that didn’t stop me from monologuing into thin air about whatever random shit popped into my head, (how the hell did Norm manage to be a regular at the Bull & Finch if he never paid his tab?) This exercise helped to prepare me for the day to come.

As I stepped into the office, a coworker ran up to me in a panic. It seemed that over the evening hours, our systems may have crashed, costing us many important files and potentially erasing the payments of several of our customers. Were this true, it could be a disaster for the firm. I had to act fast. I had to calm this guy down and set his mind at ease. So I grabbed his shoulders as they shook from his crying fit and looked him dead in the eyes.

“The check is in the mail,” I said. And walked away. The company filed for Chapter 11 two days later.

Continuing my Jack Burton experience, I headed to a nearby food truck for lunch. Unfortunately, the line for “Hot Mess” the ironically-named gazpacho food truck, was far too long for me to stand in for a bag of soup (they sell soup in a bag, what can I say?) I just didn’t have the patience for waiting.  And why should I? I’m Jack Burton now goddamn it! I’m a VIP! So I pushed my way to the front of the line.

Whenever I passed grumbling nobodies I would favor them with a smile and say “Ol’ Jack says…what the hell?” This did nothing to help clear up my behavior and actually made a few people more irate. Which, in turn, led to my involuntary gazpacho shower as patrons pelted me with bags of soup. I barely made it away safely.

So far, my experiment had failed me. Jack Burton made it look so easy. He was able to simultaneously quip, smooch the ladies and fight people who shoot lightening from their fingers. Why was I having such trouble?

That evening I went to my favorite watering hole, The Hill, to enjoy some adult beverages and try to piece together where I went wrong. I couldn’t understand it. As far as I could tell, Jack Burton had it all figured out. He was but a few short steps away from Nirvana and complete universal harmony. Meanwhile, here I was, probably out of a job and covered in tomatoes and pureed veggies.

After sipping on my fourth gin and tonic, I realized what I was missing. See it’s not enough to try and just follow Jack’s advice. If one wants to truly know enlightenment, one must commit to walking the same path as that great man. I would have to go out and buy a truck. I’d have to get married and divorced a few times, probably have a bastard child or two out there somewhere. I’d need to get into gambling and playing Mah Jong (probably) at grimy city docks in the wee morning hours. I would need to become stupider and more obtuse. And most importantly I would need the experience and hemorrhoids that only come with untold hours of sitting in a truck. I understood that all of these things were too much for me to attempt as a simple social experiment. I would have commit to a complete life overhaul. And since Love it or List it was going to be on in a few minutes, I just didn’t have the time.

I had to abandon my experiment there. But not all is lost, for I know that someone, somewhere out there, must be replicating what I did. But going further. Trying harder. Somebody out there is close to tasting spiritual oneness with Jack Burton and the cosmos. And to that person, whoever they may be, I can only say:

“Sit tight, hold the fort, keep the home fires burning. And if we’re not back by dawn…call the president.”

Or something like that. Whatever. It’s not an exact science.