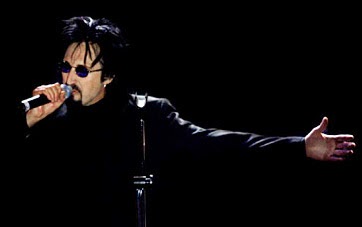 Spending my teen years in Southern California was a turbulent and confusing time. It was consistently 70 degrees and sunny, but I was a goth with dyed black hair (when it wasn't blonde, because apparently I was blonde at one point? Maybe naturally? I'm unsure) and an ambitious uniform of velour blouses from the thrift store, capes made out of whatever, and a leather jacket that I tried to draw on with White-Out, even though I can't draw and whatever I tried to draw with it just flaked off like a scab. I looked terrible, but felt great. I have a vivid memory of standing in front of the bathroom mirror at home, getting ready to hop in my Mitsubishi Mirage for a show, and my Mom walking by the open door, pausing just long enough to whisper "You look like shit," me not caring a bit because I was young, had money to burn since I basically started working the minute I could reach a doorknob, and had already slept with more women than my Dad.

I listened to a lot of Human Drama during this time. Have you heard of this band? They sound like this:

I learned about them from a fellow goth girl named Shannon who I met in Downtown Riverside during one of the street fairs they held there every Wednesday. These street fairs were a dreamy scene because Downtown Riverside looks like a haunted Spanish mission surrounded by orange trees and Christmas lights. My weird friends and I would convene there every Wednesday evening after school and spend hours walking up and down this one street, sitting in the grass smoking, not buying anything, and thinking about morbid things. I would run into this Shannon girl there every week and I had a major crush on her, even though she had a violent/rude seeming GF named Melissa who would yell at me every time she caught me staring at them. I boldly gave Shannon my phone number one night and she called me once. I took her call in my parent's room and sat on their bed, twirling their phone cord, while she talked to me about hating God and wanting to burn her school down. At the end of our convo my Dad knocked on the door and asked "what the hell are you talking about in there?" and I screamed "GET AWAY FROM THE DOOR!" We never talked on the phone again, but I'll never be able to forget her because  she taught me about Human Drama, a band that I feverishly obsessed over, until one day I didn't. 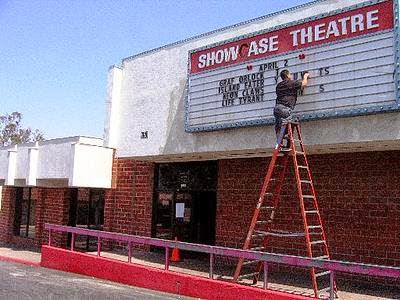 The first time I saw Human Drama perform live was at the Showcase Theater in Corona, California. The Showcase opened in 1993, and closed down in 2008, which I just learned while searching for the above picture. I'm sad to hear that this place shut down because the majority of the shows I saw while living in California during the ages of 7 and 20-ish took place here. Memories I have of seeing Human Drama at The Showcase (because I obviously saw them there more than once, I'm guessing the number would land around five times) include:

- Taking my second GF ever there and telling her "You're probably gonna see me get really emotional here."

- Sitting on the floor with my friend Yolanda and having this guy I was trying to not be gay with throw us down cigarette after cigarette from up on the balcony. Later this same evening Yolanda and I both kissed him and he accidentally burned my nose hairs with his lighter.

- Having someone tell me that they heard Johnny (lead singer from the band) beat his wife and me feeling scared about it.

- Having a crush on this tall goth guy named Aaron and turning to actual stone every time he came over to talk to me. He probably to this day thinks I'm actually mentally handicapped.

The woman you hear in the background of these videos screaming like a dying goat would have been me if I had been at this show.

I try to listen to Human Drama every so often and actually just put on a CD of theirs the other day while working at my desk. I had to take it off because it's just not the same. I'm not that weird girl anymore I guess. I'm this weird woman. Maybe a new weird girl will read this post and learn about them though. Don't try to call me on the phone about it. I don't do that anymore.

@Wolfievibes
Posted by Unknown at 12:45 PM