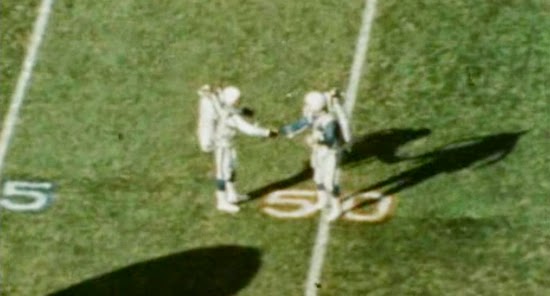 This year is the first time I think I’ve ever appreciated the Super Bowl for what it is: galaxy-sized bread and circus. I say “appreciated” because that’s the active word. I’ve definitely always known that the Super Bowl was a giant ridiculous spectacular excess, akin to when the local 4th of July fireworks go off and you hear the cost and it seems reckless and irresponsible for any local municipality ever to explode all that money even if it is artfully done, though even if you are absolutely appalled you are still going to watch it, because c’mon, 4th of July. Actually I didn’t always know this about fireworks or the Super Bowl, both because the wastefulness of those things was less glaringly obvious in the past and because I used to be a child, and children don’t know about these things.

But this year I appreciated the Super Bowl. Huge fast strong men crashed into each other, and at least incrementally damaged each other’s brains, and highly paid and very smart executives decided on the very best possible groupings of those huge fast strong men, and very clever coaches who apply 80 hour work weeks to the problem decided what those men should actually do and prepared them very well to do it, and most everybody involved gave way too much of themselves, burned themselves up, consumptively, in any of the multiple ways physical, mental, emotional, and metaphysical, a person can be used, all for my entertainment.

Powerful titans of industry, liars and charlatans, thieving robber barons, smiling in expensive suits through white-capped teeth in a seething, unctuous display of glittering immorality, and likely fighting off their own personal demons, struggling in their own way, I imagine, to contain the symptoms of the probable damage they’ve wrought on the only people who can be said to have real power over them, their own rich children, vapid confused spawn of narcissistic billionaires who want for nothing except a basic human love they cannot ever have from their parents; each have cooperated hand in hand to tent up the biggest fucking medicine show in human history and bring it personally to me, in my living room.

And that’s just the football.

There’s also Katy Perry, who rode on a gigantic robot tiger, and called up her friends Lenny Kravitz and Missy Elliott, and rehearsed a thirteen minute show with what appeared to be thousands of moving pieces for hours and hours and hours in some anonymous airplane hangar somewhere in Arizona, and danced with people dressed as sharks and rode a sparkling star, dangling fatal distances above whatever was below her. During the process some talented and brilliant and faceless people were behind and around and near Katy Perry, coordinating, wearing headsets and bellies full of caffeine to power them for however long it took to get it right, dutifully covering the back end of every creative whim Katy Perry might originate or delegate, all in order to orchestrate a music-related production that generates the effect of abstractly inspiring completeness and exactitude on a massive scale, these indefatigable workers all somehow knowing what they are doing even when, technically, what they are doing has not ever been done nor does it need to ever be done. And yet here it is, all of it. For me.

And that's just the halftime show.

A glue company flirted with what appears to be a bankruptcy-level expense for a modern glue company in order to tell me about their glue. An insurance company tried its very best to make me as sad as possible. A beer company showed me a video of a cute puppy who was friends with a horse. Nissan arbitrarily showed me one version of what it might be like to have a race car driver for a dad, and it did not make me want to buy a Nissan, but I got to watch it anyway.

Chris Collinsworth and Al Michaels did a great job explaining what was happening in the game to me, and they did not really mention much of anything that I, a member of the viewing public, might not want to hear about at the time, such as whether or not Julian Edelman was playing with a concussion, and whether it was okay to be worried about him, or whether another concussion in such rapid succession could actually end his life. They also didn’t show a replay of the Jeremy Lane wrist injury, which I appreciated, because of all the things in life I just can’t deal with at all, involuntarily viewing footage of gruesome broken bones incurred by nickel cornerbacks I’ve never heard of just because it happened and it’s the Super Bowl may be on the top of the list. Collinsworth and Michaels are shills, yes, but they are shilling for me, and they are also highly skilled professional broadcasters who work hard at their job, for me.

And the people in the production truck, the camera men, the sound men, the electrical line workers and fracking extruders who laid waste to significant portions of the planet just to power this whole thing, and whoever it is who put satellites up into orbit, and the cable guy who somehow magically pulled a coaxial wire all the way through a tiny hole in a brick building, and really all humans who fought in wars and died of diseases and lived and died in muck-guttered slums in Mumbai for no reason at all more noble than so that others somewhere else could do the opposite of that, and all people throughout history who saw the writing on the wall that we're all probably not even gonna make it but yet had babies and continued the species anyway, really, all of that has led to this weird thing that we just have decided to do. Just because.

Everybody involved worked so very very hard for me. I get to see all of it, for just about free, and my only qualification is that I am a human being with two eyeballs, and I am near a television. They don’t care that I might not be all that great of a guy, or that I can’t and don’t even really want to afford a Nissan or an electric BMW or whatever Mercedes that asshole turtle was driving, or that I have nothing but bottomless and utter contempt for the entire capitalistic mechanism behind the cynical agenda of the insane orgiastic moneyfuck they call Super Bowl, or even that I am, like all other people, constantly struggling to experience more joy than pain during the short amount of time that I’ll be alive, and therefore I can only care so much, really, about the Seahawks or the Patriots or Doritos Locos anything or any of the purported substance contained within all of the screaming noise they’ve worked so hard to produce, and that amount that I do care is always less than they appear to need from me. None of that matters to them. They did all of this stuff, which wrongheaded and damaging and “problematic” and more importantly pointless as it all so clearly is, is also quite obviously a huge effort and, frankly, seems like it was all just a totally impossible pain in the ass, all of it, just for me. Me being anybody on earth picked at random.

But that’s just this year. I live in Chicago, and we got 19.3 inches of snow, falling continuously between Saturday night and Monday morning, and my back feels as though I personally shoveled all of it. I am also moving out of an apartment I've shared with my longtime girlfriend for the last 18 months, because we are both human beings and human beings always always possess a latent ability to make things easier and more difficult for each other at the same time, the balance of which can never be accurately measured without periods of voluntary abstention. In short, I have felt more recently than usual the burden of emotional productivity, of crushing physical logistics, of what’s left when you have so much to reckon with that you must temporarily eliminate good and bad and hurt and blame and all of the why and meaning of it from the equation and just focus on what needs to be done and how it’s going to happen. And in that state, when total overwhelmed exhaustion strips out all modifiers and value judgments, the Super Bowl is just one hell of a thing. It’s a colossal monument to thingdom. Thinking about it makes my jaw hurt. And it is for me. Like I keep saying, I appreciate it. It was nice of all you people to have that Super Bowl. You shouldn’t have (really in a lot of ways you absolutely SHOULD NOT HAVE) gone to all the trouble, but I thank you for it anyway.

@itisbenjo
Posted by Ben Johnson at 11:39 AM