The Stoicism of Bill and Ted 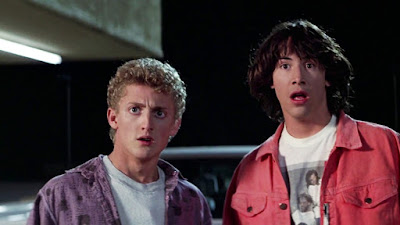 “For what prevents us from saying that the happy life is to have a mind that is free, lofty, fearless and steadfast - a mind that is placed beyond the reach of fear, beyond the reach of desire, that counts virtue the only good, baseness the only evil, and all else but a worthless mass of things, which come and go without increasing or diminishing the highest good, and neither subtract any part from the happy life nor add any part to it?A man thus grounded must, whether he wills or not, necessarily be attended by constant cheerfulness and a joy that is deep and issues from deep within, since he finds delight in his own resources, and desires no joys greater than his inner joys.”
~Seneca

Today I learned that some totally mature adult just like myself went ahead and declared June 9th "Bill and Ted Day,"  so to celebrate the righteous twosome, I've decided to share a realization I came to during a recent viewing of this most excellent movie. (Side note: whenever you are asked when you last saw Bill and Ted's Excellent Adventure, the answer should always be "recently.")

So here's the scoop. B&T's EA has a lot more going on than one might initially recognize. It is only through repeat viewings (and I do mean repeat) that one comes to the understanding that this goofy movie is actually a finely crafted testament to the Stoic philosophy.

Consider the fact that the entire adventure is set in motion when Rufus is sent back in time to help the future world saviors stay on their path to excellence. In the face of this agent of fate, how do the boys react? With a level of grace under pressure that is expected of any respectable stoic, albeit a rather goofy grace.

Throughout the rest of the film, Bill and Ted encounter a variety of tribulations, but through them all you never see their spirits flag beyond the occasional "bogus." How do they react when Ted's father threatens to send him to military school? Or when the antennae on their phone booth breaks? Or when their buddies from the past get thrown in jail? The never lose their cool, and simply take action to remedy the situation.

Speaking of their collection of time-traveling companions, they are perhaps the most glaring tell pertaining to the movie's stoic themes. Who do they bring back through the centuries? Billy the Kid, Napoleon, Genghis Khan, Joan of Arc, Freud, Beethoven, Lincoln, and – most compellingly – Socrates.

This is a pretty stoic bunch, and not only is Socrates the most renowned stoic philosopher of all time, but his behavior in the movie mirrors the silly demeanor shared by Bill and Ted. By the logic of association, they are all cut of the same cloth.

Then let's take a look a look at the sequel. Who do they befriend? None other than Death himself, who becomes their constant companion.

That's about as Hemingway as it gets right there. In fact, they have Papa beat. So you like bullfights and battlefields, Hem ole' buddy? Death plays in Bill and Ted's band.

So when each Bill and Ted Day rolls around, I want you all to take a moment to reflect on the lessons they teach us about facing the slings and arrows of life without fear and with a healthy dose of humor.
And most important, be excellent to each other.

@LifeDoneWrite
Posted by Unknown at 10:35 AM