Last night Lindsey Baker and I went to see Ed Schrader's Music Beat. We were interested in seeing this band because we had seen them open for Future Islands in New York not too long ago and enjoyed their set a great deal even though we were in the middle of fighting about something at the time. We don't remember what we had been fighting about, but we do remember liking the band, so that's a generally positive review right there.

Their show last night was at Siberia, and it was our first time going there. We rode our bikes there. That part doesn't matter much, or add a whole lot to this show review, but it helps paint the overall mental picture. We (Lindsey Baker and I) rode our bikes to this show. So if you were picturing us walking, taking a cab, taking a street car, or skateboarding there, you need to re-set the mental image that was falling into place for you about this show and insert "bicycle."

I don't want to say the name of the band that opened for Ed Schrader's Music Beat last night because I don't have very positive things to say about them. I don't want them to read this and be mad at us. One time Lindsey Baker and I saw a show in Memphis and wrote not very positive things about it and we were told by several town's folk via the internet that we are not welcome to return back to Memphis for the rest of our lives. We don't want that to happen to New Orleans because we live here now and want to stay living here.

The band that opened for Ed Schrader's Music Beat consisted of two men. One played the bass guitar. One played the regular guitar. They also had a drum machine, which Lindsey Baker thought was funny. At one point during their set the lead singer, who had a Morrissey-ish hairdo, waved his hands around and said something about being upset with how the drum machine sounded. The sound guy went up to fix it and when he walked back I saw him make a face like "this guy." I can't say that I noticed there being anything wrong with their drum machine. In general, I liked their songs, but I didn't really like "them." Oh, and it's worth mentioning that they started each song with a noise. The guy with the Morrissey-ish hairdo would get close to the microphone and  make a noise like "OOOF" and then they'd start a song. There was a guy in the audience who REALLY liked them. He was wearing white jeans and at one point he did a dance that was kind of like "the twist," but with some little stomps added in. He was looking to have a good time that night.

Ed Schrader's Music Beat are from Baltimore and we like them a great deal. The two guys in the band are Ed Schrader and Devlin Rice. Somehow they are able to get right up there on stage with just one drum, one bass guitar, a microphone, and some theatrical lighting to produce a sound that is 198% better than most everything else. We moved from the back of the room to the front of the room when they started playing and I tapped my feet around and moved my head a little. Lindsey just stood there and was like "cool." I couldn't help but notice that while they were playing the guy from the opening band, the one with the Morrissey-ish hairdo, was at the front of the stage talking very loudly. He was talking loudly and grabbing on to some girl who looked like she wasn't very enthused about being grabbed on to by him. I got the feeling that the guy with the Morrissey-ish hairdo was sad that everyone loved Ed Schrader and no one had really loved him, what with the awkward exchange between him and his drum machine and all.

Ed Schrader bangs on his drum in a very enjoyable way. He also has great stage banter. At one point he took his shirt off and made a remark about his nipples. A guy in the audience made a joke about Ed Schrader's nipples looking like they were made of clay. I thought this was an unusual thing to say. I can't recall there ever being a time where I felt compelled to yell words from where I was standing, up to the person performing on stage in front of me. I guess I yell the word "WHOOOO," but that's different.

At the end of Ed Schrader's set Lindsey Baker bought me one of their records and even had Ed Schrader sign it. I said a few words to him and before I did that I touched his bare shoulder/back with my hand to get his attention and it felt very intimate. When he signed the album we bought he wrote " Turn and face the strange." 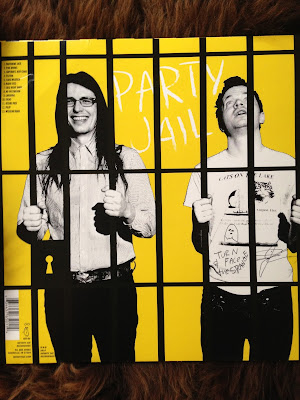 As Lindsey Baker and I were getting ready to leave Siberia and drive our bikes home, we stood outside smoking and the guy who was in the opening band, the one with the Morrissey-ish hairdo, walked by and said something about the band shirt I was wearing, and how he was friends with that band. Of course he did. Of course he is.

Ed Schrader's Music Beat are playing more shows and you can see where they are here: 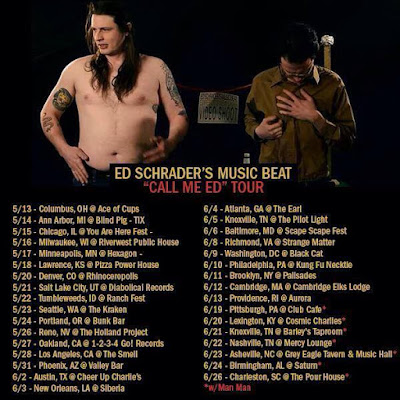