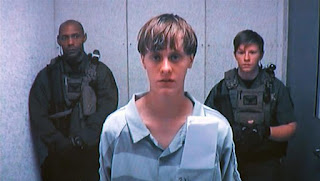 I’ve been thinking a lot about white people this week. I’m white. One of the major privileges afforded to American white people is not having to think about what it means to be white, but since apparently a thing that white people sometimes do is walk into a church specifically to kill black people, I figure I owe it to myself to try.

I’m not just any kind of white person. There’s no such thing as “any kind of white person,” as much as us white people would like to believe in such a concept, you know, since such an abbreviation of our multiple cultural and ethnic white personae into “American white person” better serves the agenda of American white supremacy. This allows us to present a unified political front and avoid direct confrontation of our specific role in the interlocking culpabilities which form the current system. But I belong to one of those cultural and ethnic white identities. I’m mostly Scotch-Irish. Hooray for me.

Former Virginia U.S. Senator Jim Webb wrote a book about the Scotch-Irish in America. I read it. It’s half well-researched ethnography and social history, and half bullshit non-apology for Scotch-Irish complicity in America’s foundational genocides. Dude was an active politician at the time of its writing, so of course it lapsed into cheerleading memoir drivel about American Greatness and potential and political awakening which it was Webb's fortune to have waxed rhapsodically about in the blissfully ignorant few years leading up to that awakening’s eventual fetid Tea Partydom. I recommend Born Fighting if you’d like a deeper understanding of the Scotch-Irish role in the formation of American culture highlighted, intentionally and unintentionally, by a working definition of our particular and continued delusions.

We are not, in a general sense, good people. We do have several somewhat reasonable excuses for this. The fact that you can’t reliably grow crops in southern Scotland is a somewhat reasonable excuse for our strain of survivalist truculence. We spent many centuries before North American colonialism enduring famine, poverty, and I’ll even go so far as to say political and religious oppression. It hardened us, weaponized us, blinded us to the latent immorality of violence, and made us distrustful of outsiders, “the other,” and intellectualism. In short, we’re some of the most obnoxious, boorish assholes ever produced by human history. That peculiar cringing feeling of omnipresent aggression you occasionally get from an extra shouty truck commercial? That's us.

As such, the Scotch-Irish have forever been used by larger authoritarian forces, pretty much since human population densities allowed for the invention of “larger authoritarian forces,” like a live grenade in a historical game of hot potato. First it was: “Hey guys, we’re having some trouble dealing with the Irish, why don’t you go hang out in Ireland and just be your usual selves and wreck shit? Here’s some land.” Then, just about as soon as the naval technology was available for it, we were shipped to America, where it was: “Hey, go kill some Indians and settle this dangerous land, guys, and we promise we’ll give you a fair deal on all the raw materials you plunder.” And an early and continuing: “Hey, I’ve got this sweet plantation setup with all these black people picking cotton for free, all I need from you guys is to hold this whip and wear these sheets and scare the fuck out of them so they don’t come to their senses and kill me.” Now its “Hey, these Arabs who just happen to be sitting on huge deposits of oil and natural gas are all terrorists, you should go get them” and “Hey, we’ve been importing and exploiting Mexican labor for decades to break your labor unions and stagnate your wages, what a bunch of freeloaders, right? Anyway, could you stand on the border with a gun and just generally help us make sure they stay disenfranchised?”  Hey this and hey that forever, and the Scotch-Irish have always been game.

To look at this history and apply the word “manipulation” to the Scotch-Irish is to ignore the one most deeply rooted aspect of Scotch-Irish culture. Survivalism. As much as you could tell the story that every direction the Scotch-Irish have ever gone has been away from an even bigger asshole who’s chuckling at our backs about what suckers we are, what’s in it for us is we get to spread and survive, and more importantly we’ve always been allowed to point a thumb over our shoulders and say, with a certain air of truth, “Yeah, what we’re doing isn’t great, but we’re only simple folk who just want to drink moonshine in Appalachian hollers. Those guys back there are the real assholes. Believe us, we know.”

And for all our readily apparent stupidity, if we are stupid, we’re stupid like a fox. Why do you think we mind it so little when we’re called stupid? Why do you think we pay so much of our own money for Jeff Foxworthy and Larry The Cable Guy and the Duck Dynasty guys to go out into the culture and represent us as ignorant rednecks? We eagerly promote our own version of minstrelsy because the stupider everybody thinks we are, the more we can get away with.

The Scotch-Irish are not now and have never been manipulated. Or stupid, for that matter. The culture we propagate conceals careful planning. Our actively maintained veneer of stupidity is the cultural wing of our just as rigorously attended to penury relative to strawman “fat cat” operatives. We don’t need to live in a “fancy mansion” or drive a “fancy car.” We “only” want “simple things” like a pickup truck and a baseball game and “freedom” and a “safe place to raise our kids,” all of which are bloodthirsty privileges we’d prefer to treat as birthright offerings of the “American Dream.” As quick as we are to laugh at being called rednecks, we are equally quick, whenever being called racists, to initiate O.J. Simpson-like searches for “the real racists.” Our kneejerks in that direction amount to “#wellactually we’d prefer the technically more accurate term Living Instruments Of Racism.” This is all by design.

As long as we, and here’s where the Scotch-Irish functionally join forces with other white American ethnicities to form the concept of “general whiteness,” are most firmly and most visibly entrenched as the management class and no more, we can maintain at least a plausible separation from the ownership class, and will therefore never have to answer for our role in the systematic and violent worldwide oppression of people of color. We’re like a recalcitrant mean drunk whose only strategy for confronting their alcoholism is to be the second most fucked up person at every party.

Webb makes a pretty convincing argument that American culture, particularly Southern American culture, is Scotch-Irish in origin. He theorizes that this is because those wonderful, defiant Scotch-Irish offer such a strong and proud culture that it assimilates all who come across it. Once them I-talians hear the fiddles a-calling, they just don’t have a chance. Yee haw.

This, of course, is an ethno-jingoistic load of crap. Scotch-Irish culture doesn’t assimilate other white cultures. It is appropriated by other white cultures, because Scotch-Irish culture is a great big survival-ensuring sleight of hand that works equally well for all white people (or, “white” being a fluid concept, even aspiring white people!) who embrace it. Witness shit like this, wherein multimillionaires and even low-grade billionaires get to act like the “real problem” is the ultra-ultra-ultra rich, all while using their own manpower to enact and enforce the exact infrastructure that most validates this claim.

Scotch-Irish culture is available to anybody with a talent for it who wants to put a little aw-shucks twang in their voice, and tell you to your face that if there even is such thing as a rich white person standing on your neck, well shoot, it sure as heck ain’t me. Scotch-Irish culture is like a cockroach infestation this way. Its prevalence has nothing to do with tradition or pride or fucking bagpipes echoing in the fucking mystical glens of yore. It’s the Nuremburg Defense jamming on a banjo. It’s the central lie White America tells over and over and over again, and will probably never stop telling unless and until it becomes somehow untenable. It has got to go.

But it will not be easy to get rid of. Even now I find within myself a cowardly urge to hedge on these words. I want to say that it's okay, I'm just a little hopped up on coffee right now, I don’t really know what I’m talking about, that this is a mere online rant, a furious blurting mess, and not a well-researched peer reviewed legitimate and worthy text, whatever that means, that this is all just one man’s opinion. I’m Scotch-Irish, after all. I have that particular brand of wily cowardice in my blood.

Some of my ancestors came to this land a very long time ago on a ship full of “religious dissidents.” I believe some of them owned slaves, and perhaps some might have managed plantations, although the likelihood of this is deemphasized in my family history in favor of mythically “honest” wood-wandering hillbillies who I am told couldn’t afford shoes, much less a slave. They probably dreamed of owning slaves. They probably murdered and raped and tortured and plundered from black people, and the only evidence of their honesty or goodness on the subject of race is whatever sense of shame has prevented those stories from reaching my ears all these years hence. Instead I hear some suspicious claptrap about the “fairness” of a distant relative magnanimously rejecting impunity by not laying a profiteering white thumb on a bale-weighing scale, or rather being insulted at the suggestion, which is not at all the same thing. Though I yearn to, I cannot realistically proclaim the full innocence of my white ancestors. They were in this country for hundreds of its antebellum years, and yet here I am in a way that John Brown and his sons are not.

The heart-wrenching guilt of admitting complicity, of coming full, flush, and head-on with it in the mirror, of saying “me, only me in this, and not any kind of them” is overwhelming. I have family in the south who I love very deeply. Some of them have Confederate flags hanging in their basement and have uttered the word "nigger" socially in the context of the phrase "I hate niggers," true incidences about which I have said nothing until now. I am conditioned, by design, to feel like a betrayer in taking a long, honest, open look at my Scotch-Irish heritage. But if rejecting all of it, not just the “bad parts,” and accepting the massive, unfathomable pain that comes from an honest appraisal of my history and even my very self as a living monument to millennia of murderous inhumanity and centuries of racial injustice is what it takes for me to come out the other end and actually deserve forgiveness, that’s what the fuck I am going to do.

I invite you to join me.