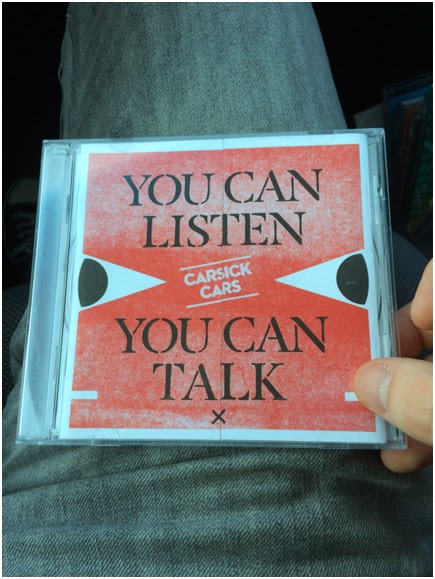 There it is. A real-life physical object. Not something I downloaded or burned or ripped. I mean, obviously I already have it illegally downloaded on my computer. How else would I know it was good before I bought it? But whatever, now I own it. It can’t be accidentally deleted or lost in a tragic computer crash. It’s official. I bought a CD in the year 2014. I bought it with fifteen dollars of paper money. No card-sliding or pin-numbering. I used Money to get this. And now it’s Mine.

But before you justifiably call me an old fart, or another stupid 90s hipster, or a hoarder, I’ve gotta further explain why this retro chic exchange had a true purpose and meaning.

I had grabbed this dandy little creature from the merch guy at the Carsick Cars/Dean Wareham concert at the Bowery Ballroom in New York City on April 5, 2014. After retrieval, I stared at this CD for a sec in total awe and disbelief and told the guy, “Hey, this is important stuff here.” And he said, “Yeah, I know.” And this lady standing behind me, she kinda screamed, “YES,” in agreement.

I nodded at the enthusiastic stranger and added, “I can’t believe I’m holding this. I never thought…” I shook my head and stared more and then finally stumbled onto Delancey Street and got on with my life.

What I was trying to spit out to the fellow fan was that I never thought that I’d ever see Carsick Cars play music again, and in fact I thought they were plain nevermore, and maybe never had been, and all this time they were a figment of my imagination. But now they were here and I had genuine non-Internet proof!

What many of these articles fail to mention is that Carsick Cars have one of the coolest noisy guitar sounds that I’ve ever heard. And that’s the type of music that I listen to most of the time, weirdo noise guitar punk garage rock, so I feel OK about shouting from the hilltops that their guitar sound is fucking awesome and better than most guitar sounds and I’ll even venture to say that I never find them boring.

More than five years ago, November 13, 2009, I saw them in person at Hampshire College in Amherst, MA. Looking back, the performance seems like another post-college mirage, something that happened to me, but felt more dream-like than real. I had just graduated the past spring and was still getting over the fact that I no longer had a college radio show and I was living at home again and living at home was inevitably giving me flashbacks to high school. I had PTSD. I went back to western Massachusetts to see if I still had a soul.

My friends and I happened to stumble upon Carsick Cars playing at the dining hall. Who knows why we were on the Hampshire College campus, but what I do know was that a throng of young Chinese women reacted to Carsick Cars like they were The Beatles. By the end of the show, I understood their enthusiasm, and even felt encouraged to jump around to the last couple of their songs, and didn’t even feel self-conscious.

Soon after that show I fell in love with Carsick Cars’ records. Their 2007 self-titled debut has their greatest song, “Zhong Nan Hai,” but their masterwork is the one I’m holding in my hands in that picture: “You Can Listen, You Can Talk.” It was released in 2009 to such little acclaim that I was almost certain I had made up the entire episode in my mind in order to placate my otherwise depressing existence at the time. But there it is, in my hand, courtesy of Maybe Mars, a Beijing CD label.

I’ve listened to that record so many times that I can’t even properly describe it without drowning in clichés or “sounds like” laziness. I can merely cite statistics to support my obsession: I’ve listened to their best two songs, “Zhong Nan Hai” and the title track from “You Can Listen, You Can Talk”, exactly 132 times each, according my iTunes library. These, of course, are my all-time most-played songs. (I sent the music to our fearless leader Ben, and he said they were like Sonic Youth, but with better songs, even though most of the singing was done in Chinese. I thought this was an apt description.)

These two records have lasted through the past five years, enduring my descent into almost complete disillusionment with modern popular culture and my ever-changing taste. Yet, over that time, I never read, or saw, or heard anything about them anywhere, ever. Even Google couldn’t tell me where to find Carsick Cars. I was stunned that one of my favorite bands barely existed.

Then, suddenly, a few months back, without any warning, there was a lead: during one of my Internet band-searching sessions I found out that Carsick Cars were back.  And they had a new album coming out, called “3.” Plus, allegedly, Carsick Cars were playing with Dean Wareham in New York City at the Bowery Ballroom. Of course, I had to go, to make sure they weren’t a hallucination.

Sure enough, on April 5, 2014, there they were, standing onstage upstairs at the Bowery, belting out the hits from their three records. And of course they ended with “You Can Listen, You Can Talk” and “Zhong Nan Hai.” They sounded great, like they hadn’t been on a mysterious five-year hiatus. It was like they had been playing and touring and impressing for the past five years and were setting the world on fire and were the hottest buzz-band in the world.

In conclusion, Carsick Cars are real. Even if they disappear for another ten years, I have their CD. It wasn’t a dream. It was real. And the Internet can’t ever take that away.

Note: Dean Wareham was also unbelievable that night, but you knew that already.

@whatgoesonline
Posted by TOTAL BOZO at 9:00 AM