My Life Has A Damn Rooster In It 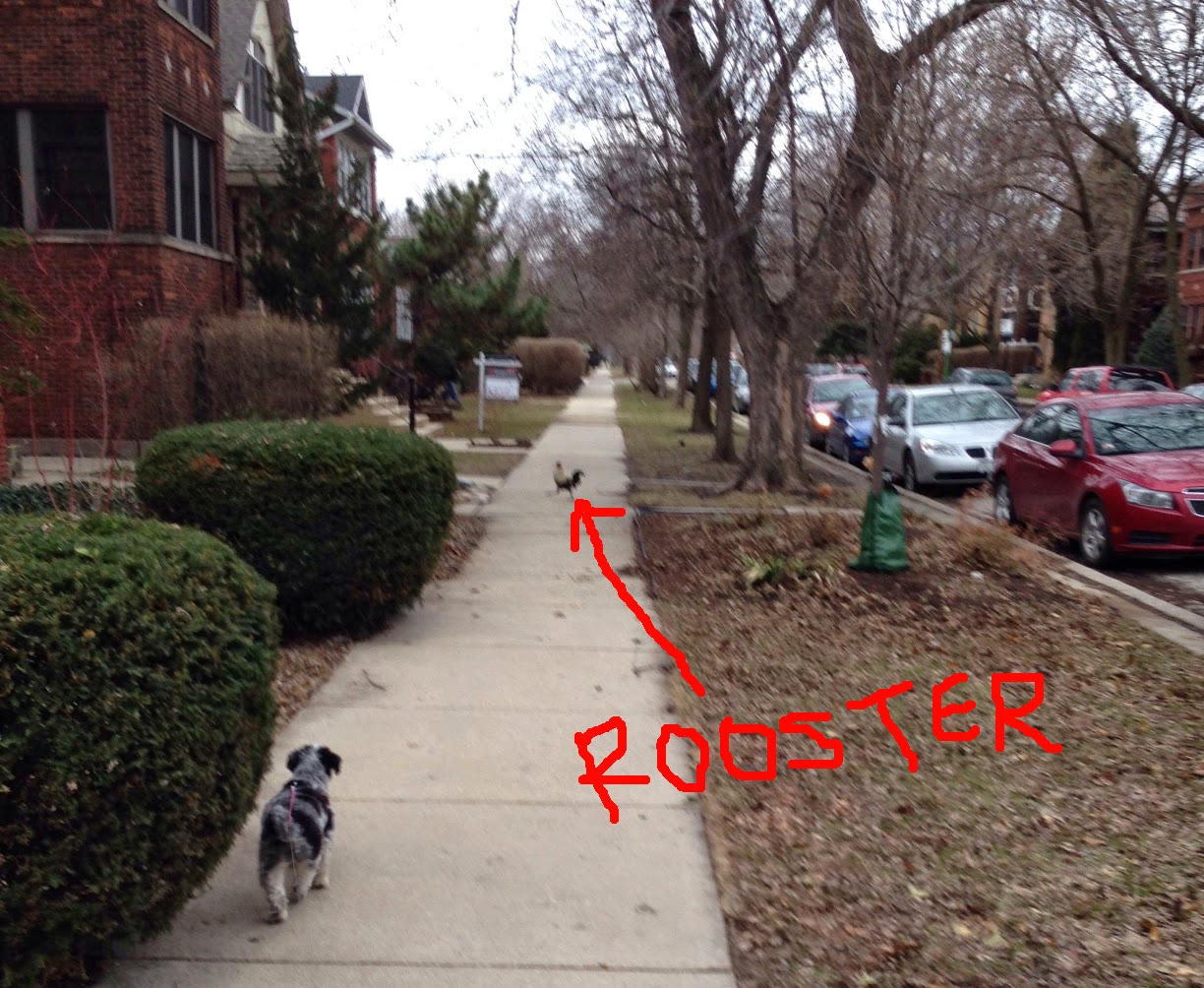 Oh la la la. Think I’ll go outside. Just leave the house to go for a walk or to go get something that is not in my house. It’s time to walk the dog or get a breath of fresh air. Whatever reason. I’m gonna be outside now.

“Guess what, dickhead? I’M A GODDAMN ROOSTER AND I’M OUT HERE TOO.”

This is my new reality. There’s a rooster on my block now. A loose rooster. Just out there on my block, living on the streets. He’s been out there since Friday. What is he doing? Rooster things. Walking and pecking and making weird rooster noises. He’s so rooster. He’s an exact rooster. Where did he come from? Rooster places. How did he get here? Through rooster means. Why is he here? There is no why. There is rooster. One hundred percent rooster.

I called the City to report the presence of a rooster on my block. I don’t know what they’re supposed to do about it, but that felt like the thing to do. Don’t they have a guy they call? A rooster guy? Some degenerate in a white van who shows up when there’s a rooster and then makes that rooster go away, no questions asked? And then I get to pretend to my girlfriend that the rooster is in the City’s petting zoo now instead of lying dead in the back of a white van with its neck wrung? I wouldn’t care if somebody showed up and wrung this rooster’s neck. It’s a rooster. He’s not doing anything for me. Maybe neck-wringing is how rooster people deal with roosters. I don’t know.

So I called the City because the City is a big organization with more resources than me. There must be some kind of a service for weirdly placed farm animals walking aimlessly around on the 2700 block of West Sunnyside. Those phone calls have to have an extension to be forwarded to, like an “Animal Disturbances - 8011” entry just sitting there on some coffee stained old directory printed on blue copy paper.

The operator at the City hotline asked me if I’d like to add my name to the request. No thanks. Let’s make this an anonymous rooster tip. I don’t need the roosters to do some sort of a rooster FOIA request and trace this back to me. I’ve done my part. The rest is up to the City of Chicago. I’m confident that the Chicago Rooster Department will handle the situation. Somewhere in a city database there’s a rooster report, corresponding to the actual rooster who is actually on my block being a rooster. It’s official. The official rooster protocol has been initiated.

I called the City about the rooster on Thursday, maybe Friday. I don’t remember when. I don’t keep a rooster journal. The rooster was still out there as recently as Monday. I'm starting to feel like the City’s Rooster Department is not a thing. Maybe the City operator I talked to about a rooster was mouthing “another rooster guy” to her fellow City operators and doing a “cuckoo crazy man” motion with her finger and maybe also a jerk off motion after asking me if I’d like to put my name on the report. Probably the report said something like “rooster: not an immediate threat” and got shuffled down whatever black hole of paperwork happens in the City’s offices. Our City has potholes that will bend your car like a taco and swallow it whole, I’m sure reports of a rooster situation are not in anybody’s high priority bin. Still, it felt good to initiate the City of Chicago’s official rooster protocol. That’s something I knew I could do. It made me feel helpful and engaged, an active participant in my block’s ongoing rooster issue, a contributing member of the community.

I don’t know how roosters operate, but I think I am against loose roosters in the community. That said, I don't need to participate a moral panic about roosters. I have no interest in forming an ad hoc rooster committee or engage in a neighborhood forum debate about what kind of a threat roosters pose. I called the City about the rooster on my block. My involvement in this is over.

Theoretically, I would not be totally surprised if some rooster expert told me that roosters on my block are especially a problem because roosters love to peck out the eyeballs of children and small dogs. Theoretically, if some rooster tried to step to me I would kick it in its damn rooster head. I don't feel any responsibility to loose, unwanted roosters. Sorry. You should have thought of that before you were a rooster.

That's all theoretical, though. Theoretical is my favorite kind of rooster problem. Maybe roosters are vicious destroyers of young children’s eyes and known attackers of small dogs who need to be kicked in the head when in range. Maybe not. I don't know. It shouldn’t be my job to know that. All I know, on a practical real-life rooster situation level, is that the rooster on my block should not be out there where he is. That is a traditionally non-rooster area, and to be honest I liked that area better when it involved zero potential for any rooster-related hassles. If that sounds prejudicial, so be it. I’m a simple man. I do not understand roosters, and I do not welcome stray roosters into my life with open arms. I like for the roosters in my life to be there as a result of a choice I made to be near where there are roosters.

If I have lived my life up until now in a fairly un-roosterlike manner, I assure you it has not been because I fear roosters or consciously avoid roosters. I've been to rooster places, such as petting zoos and the Dominican Republic. While I was in these rooster places, seeing a rooster, I thought to myself “oh, a rooster.” I've never lived in a rooster place, though. Roosters had nothing to do with this decision, it's just how I've lived my life. It's been pretty rooster free up until now.

Now I do live in a rooster place, though, because there’s a rooster. This change in my life has led to some very small adjustments, such as thinking about roosters and also seeing one rooster. I can say with confidence that I am much more rooster wary now than I ever have been in my life up to this point. But I have not had to make any major rooster-based changes in my general daily behavior. Mostly this rooster just walks around and then if you get kind of near him he walks into a bush and then he is a rooster in a bush. So far the rooster hasn’t done any kind of rooster violence or “rooster gonna get you” moves. I'm not sure he will. I don't know what this rooster is capable of because I don’t know anything about roosters. I am unprepared for this, or any, rooster. 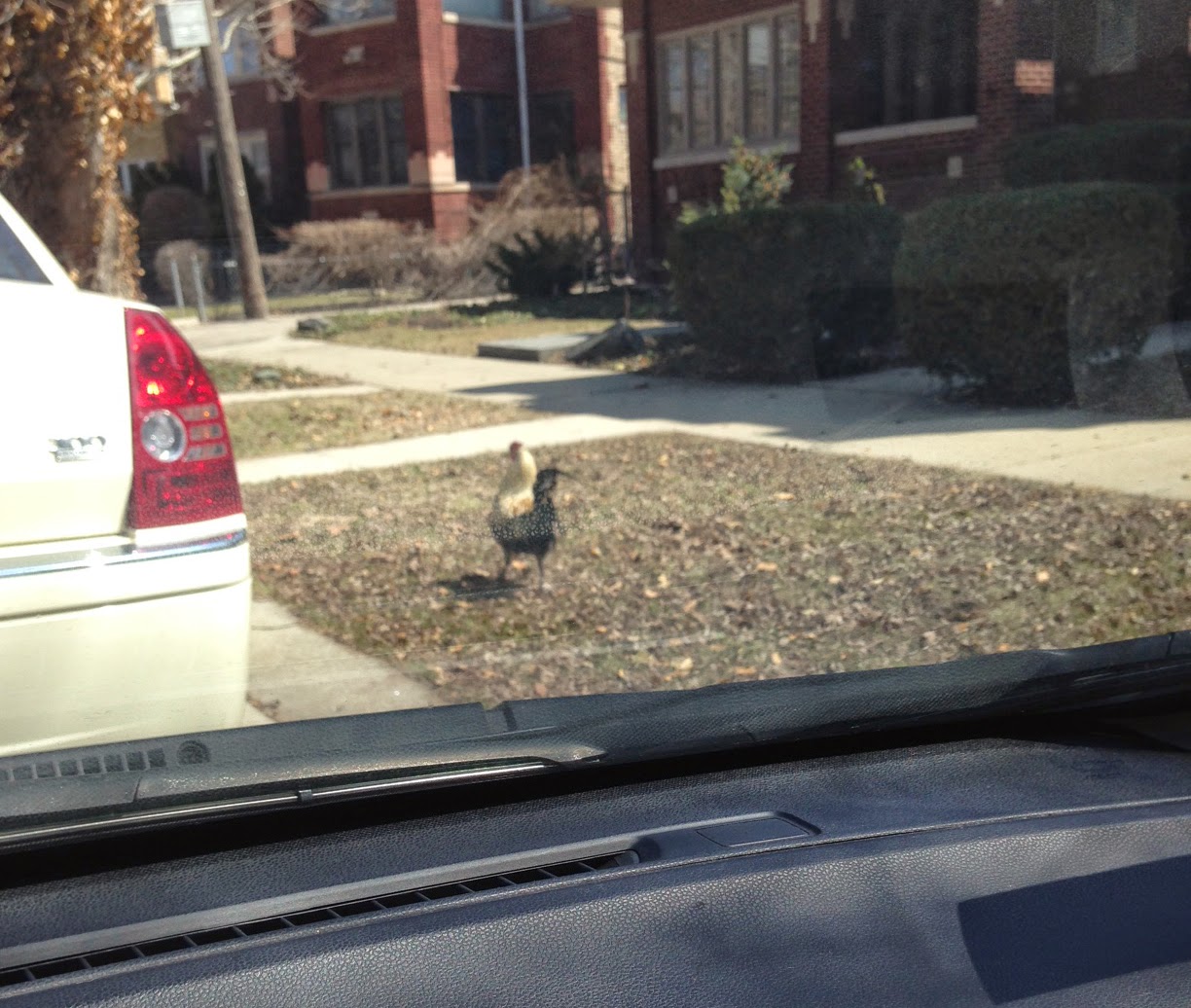 I could Google “how to handle a rooster” or “rooster expert secrets of success.” I could learn about rooster things and not feel the constraints of my rooster ignorance. But I don’t want to. That would feel like the rooster getting the upper hand. I didn’t Google rooster things before this rooster situation, I’m damn sure not going to Google any rooster things now. You hear that, rooster? I’m not Googling you. It doesn’t matter how much you’re a rooster. If a rooster bit me I would Google “rooster bites – are they dangerous?” I mean, obviously. We’ll cross that bridge when we come to it, rooster, and we better fucking not cross that bridge. Rooster Bite Bridge is a No Me Zone.

I’m not gonna waste my time figuring out how to coexist with a rooster. You’re the problem. Not me. I live here. I have a home. I pay rent and everything. You do not. You’re a rooster.

“Guess what, dickhead,” says the rooster, “YOUR LIFE HAS ROOSTERS IN IT NOW. FOR EXAMPLE, ME. A MOTHERFUCKING ROOSTER.”

And he’s right. He’s won that battle. I am now thinking about roosters. I open my front door, I walk down my steps, I’m checking the block for roosters now. Just in case there’s a rooster. I never did that before, but now I’m doing that. Probably for the rest of my life, some part of me will check for roosters. It doesn’t matter how un-roostery the place is. I’m checking. I want to know if there’s a rooster. Why? I don’t know. Because, apparently, there might be a rooster.

That’s the lesson I’m taking away from this whole thing. There might be a rooster. I don’t like it, but you can’t argue with it when there’s a rooster and he’s there being a full blown fucking rooster right in your goddamn face like that. I’m sorry to say it, guys. There are roosters. And you know where they are? Wherever they are. They don’t give a shit. They’re gonna keep being roosters. You can’t do anything about that. I know this now.