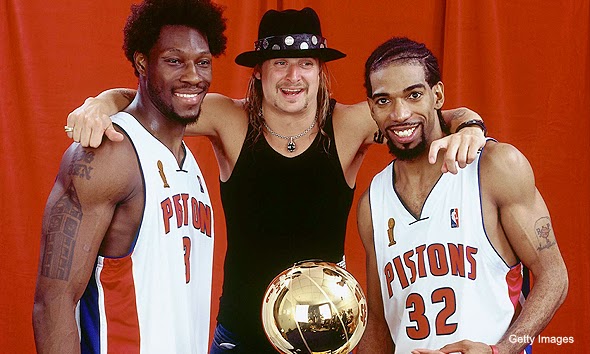 I stared at the white karaoke booklet and I couldn’t decide what song I was going to perform.  The Strokes?  I’d already done “Last Nite” several times.  Kanye?  Singing “Amazing” at consecutive karaoke visits is just bad karaoke etiquette. The Stones’ “Sympathy for the Devil”?  The mood didn’t quite call for it.

As the third Sublime song of the night came on, I glanced at my two friends who had finally arrived.  “Tonight is the night, guys.”  One of my friends nodded.  The other look puzzled.

I quickly scanned the lyrics on my iPhone.  “Are you looking up the lyrics?” my friend asked me.  I was quietly deciding which lines I would hit the hardest, the lines I would enunciate properly.  I replied: “Kid Rock’s spitting fire on this one.  I must do it justice.”

The song I performed on this night of karaoke is called “Cowboy”.

Throughout the night, I had been sitting on edge at the bar, watching the Memphis Grizzlies vs. Oklahoma City (OKC) Thunder first round playoff basketball game.  This was the second game of their best of seven series.  Oklahoma City decisively took the first game, winning by 14.  I missed that one, but Kevin Durant lead the Thunder with 33 points, so I imagine his general dominance played a large part in their win.

This match-up between the number 2 seed (OKC) and the number 7 seed (Memphis) had turned out to be a memorable slug-fest.  The Thunder have a disciplined offensive juggernaut in Durant and maniac speed and athleticism in guard Russell Westbrook.

Memphis are strong on the defensive end, with Tony Allen doing lots of the dirty work.  Allen cannot shoot, but his ability to harass Kevin Durant makes up for that.  Zach Randolph and Marc Gasol are huge strong men who the Grizzlies deploy around the rim in order to ruin any driving Thunder player’s day.  Gasol’s no slouch on the offensive end either.  I particularly enjoyed watching him run pick and rolls with point guard Michael Conley.

Memphis had slowly started pulling away in the fourth quarter, but a crazy comeback by the Thunder kept the game close.  A last-second lay-up from former Celtic and current Thunder(er) Kendrick Perkins sent it into overtime.

The game was at the Chesapeake Energy Arena in Oklahoma City, Oklahoma, and the crowd seemed rather into the game, in comparison to the typical listless arenas across the NBA. Unfortunately, the crowd I was physically a part of, at the bar I was sitting at, was intent in making the night as uncomfortable and miserable for me as possible.

One homely girl in a frumpy emerald green dress had shown up alone to sing karaoke.  She had performed the five most tedious and horrid songs from the modern pop songbook.  One was “My Humps.”  One was a typical No Doubt screech.  Another tune discussed her being a hero or needing a hero or both being a hero and not needing a hero.  I didn’t know the names to most of these songs.  Even though I felt pity for her deep-seeded loneliness, I could not help but get excessively annoyed at her, for she insisted upon going up to sing, over and over again.

Three Sublime songs dotted the rest of the proceedings, including that catchy one about date rape.  Aside from a tight rendition of Ricky Martin’s “Livin’ La Vida Loca”, there was not a single good, amusing, or fun performance.  I was getting ready to leave, due to my excessive fucking annoyance, but, since the basketball game went into overtime, I was stuck, and I ordered another round.  And I had no choice but to sign up for karaoke.

After enduring an over-the-top and obvious “Bohemian Rhapsody”, I was asked to take the stage.  When the song started, at least two people groaned.  The schlubby karaoke supervisor/DJ man whispered to a waitress that the bartender gets five extra dollars for every Kid Rock song.

The first verse came at me fast.  I made sure to mention I was “Kid Rock up and down your block” and that I was prepared to “Give a toast to the sun/drink with the stars, Get thrown in the mix/and tossed out of bars” and so on.

By the time the chorus came around, I was out of breath.  I added in “Cowboy Baby” as raunchily as possible during the appropriate moments.

I was barely ready for the second verse, and during the whistling part I hooted like an owl instead of whistling.  I skipped some of the second verse because I was so pumped for the last verse and I knew I needed to conserve my energy.

The third verse starts off with “Yeah, Kid Rock/You can call me Tex, Rollin sunset women/with a bottle of Becks.”

The other best part: “I ain’t no G/I’m just a regular failure, I ain’t straight outta Compton/I’m straight out the trailer.  Cuss like a sailor/drink like a Mick, My only words of wisdom are just/Radio Edit.”  I stretched out the “Radio Edit” part for as long as I could.  I didn’t want this moment to end.

As the final chorus came on, and I hammed up the fact that I was a “Cowboy, baby”, I realized I had done the opposite of winning over the crowd.  One of my friends said I did a good job of channeling all the hate in the room.