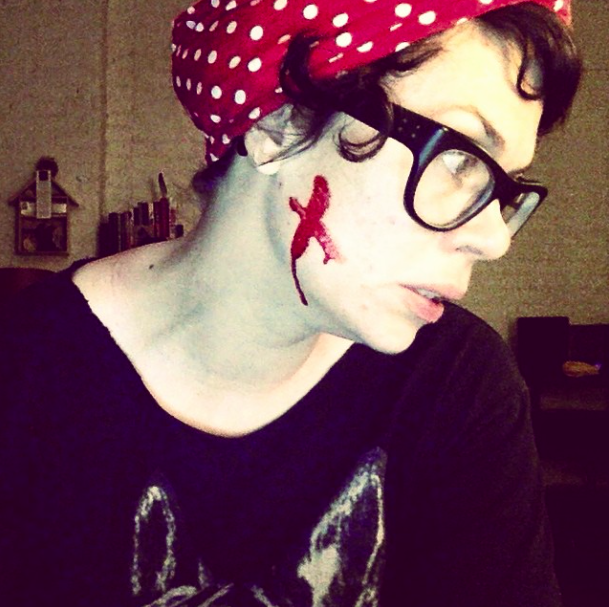 I am terrified of haunted houses because they usually include the things that I find to be most terrifying: People leaping out from around corners, people screaming something in your ear, teamwork of some sort, and theater majors running at you from down a hallway. None the less, I still very much enjoy going to them because I get a great deal of pleasure out of being in uncomfortable situations. Being in a uncomfortable situation, for me, is the same as going to a day spa because it cancels everything out to zero. You're there. Things are happening to you. And you don't have to think about anything else.

Last night some friends and I went to Nightmare: New York  which calls itself "New York's Most Terrifying Haunted House." The haunted house is put on by a group of people who have been doing the Nightmare houses for years, and each year has a different theme. The themes of the house for the last two years were KILLERS, and KILLERS2 and they centered around being led through different themed rooms occupied by a different serial killer. Apparently John Wayne Gacy masturbated at you in one of them, I don't know. I was supposed to go to KILLERS two years ago, and had tickets and everything, but flaked out to go on some weird internet date which I'm sure was way more horrifying than any haunted house could ever be on account of the fact that the girl I was on the date with got drunk and told me how her Dad was in jail for molesting children. BOO!

The theme for this year's Nightmare is New York, which definitely sets itself up to be scary because everything about New York screams feces, rats, pee in the streets, hot crowded areas, and insane people as far as the eye can see. The only problem with this theme is that for people actually living in New York, a haunted house centered around horrific horrors that we live through every day is not really gonna throw us for a loop. If Nightmare: New York went down in Nebraska though, people would probably have to be carried out on stretchers.

I did a fair amount of research online about Nightmare: New York prior to going through it and was excited to learn that I'd be encountering a rat king, David Berkowitz (AKA, The Son of Sam), Typhoid Mary, and Mole People. I also read something about seeing John Lennon get shot, but if that happened during the haunted house, I didn't notice it, which sums up the major flaw of Nightmare: New York. The rooms you're led through all happen so fast and if you didn't take the time out to research the different themes beforehand, or read the various informative plaques on the walls in the lobby while you're waiting to go in, you wouldn't know what the hell was happening. After walking through my friend Laurie asked me, "what was with the guy yelling at the dog?" and I explained that it was supposed to be Berkowitz. If his story was somehow explained better during the visit to his themed room, it would have definitely been one of the scarier moments, but as it was it kinda fell flat because again, having a bloated guy in a bad wig yell at a dog and then go "BANG BANG" in your face is old hat to people who have spent more than a year living in New York. Same with the guy who singles you out of your group to masturbate at you through his pants. Who HASN'T that happened to in New York?

What does set Nightmare apart from other haunted houses is that it goes beyond the standard jump out and scream scenario. Certain parts are interactive and physical, which gives things an extra punch. Before going in my friends and I opted to have a blood red x painted on us, which allows you to have a "more intense experience," meaning that the people inside can grab you and make you do things, where as otherwise they wouldn't be allowed to touch you at all. I was really hoping to get tossed around a bit, but at most I think a lady breathed some hot breath in my face, and a guy pushed me. And both of those memories I had to really think about to remember happening. Two physical things that happened towards the end of the house were scary just because they were uncomfortable and those revolved around mushing your body through two puffy sacks for a really long time (I realize that doesn't make sense) and having a black bag put over your head while holding on to a rope and following it around a dark maze that goes nowhere. As I was following the rope with the bag on my head, a man kept whispering in my ear to tell me to hurry up. I don't think he was doing this to be scary, I think he genuinely just wanted me to move faster. While going along I thought about where the dark maze was leading us, and what the grand finale would be. Some possibilities that came to mind were getting smacked in the back of the head, falling into a hole, or removing the bag from your head to see something horrific up in your face. None of that happened. It was just suddenly over.

All in all Nightmare: New York is worth the $30 ticket price for general admission, but I'm glad I didn't have to pay for it.

1) The guy who jumped out of the bathroom with a pantyhose on his head while I was waiting to pee.

2) Indian ghost who handed my friend Laurie a pumpkin which she then handed to another ghost asking "want my pumpkin?"