Why Did I Do This Report: Six Flags Fright Fest 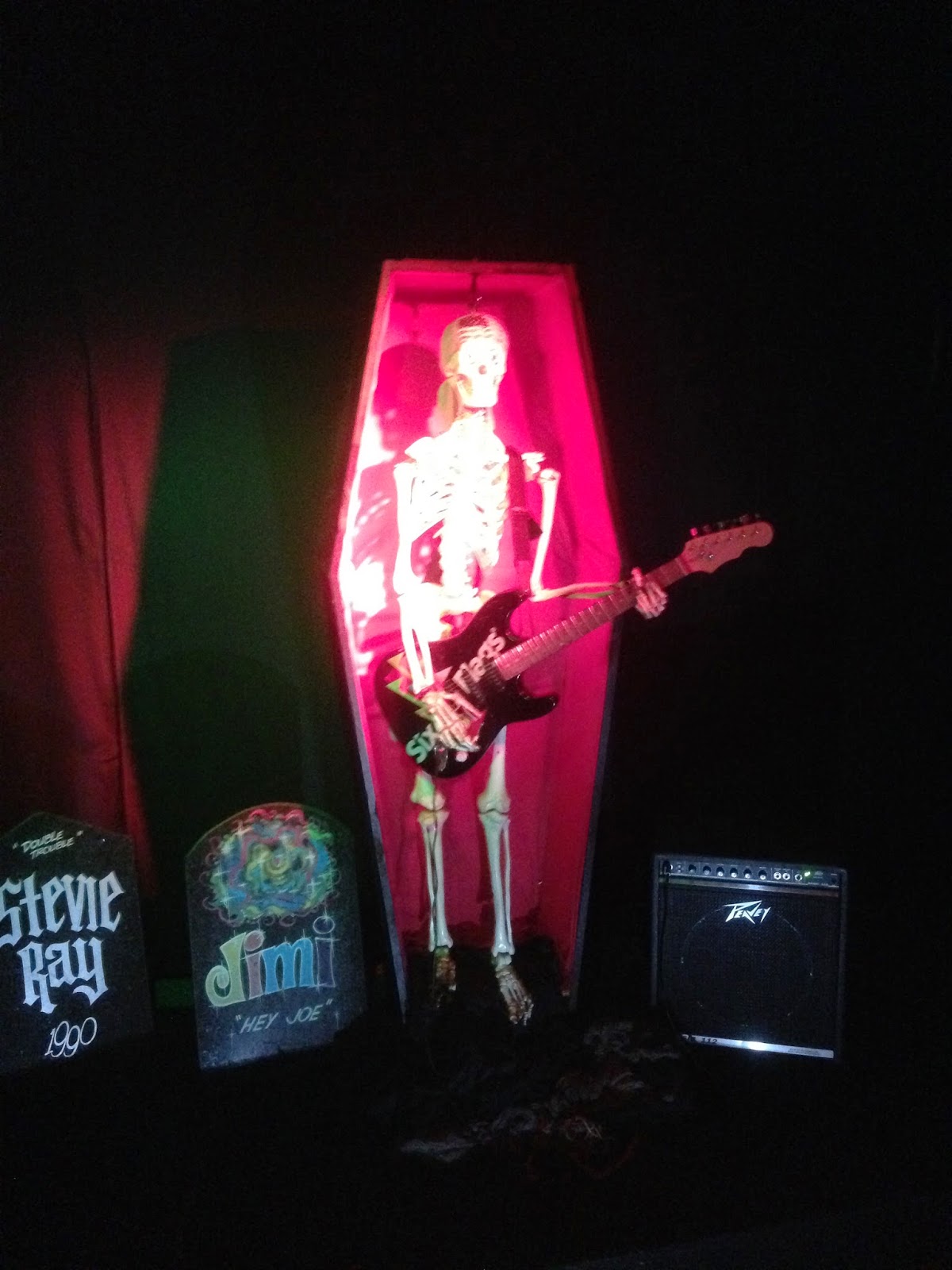 I am an adult now, so I finally understand the experiential frame of reference from which Six Flags is the worst place in the entire universe. It is all of the worst things: loud, tawdry, expensive, crowded, sentimental, conformist, consumerist, dumb, theatrical. It is a place that charges $14.99 for a gigantic ugly plastic souvenir cup that grants you access to free soda refills no human should ever need, plays “Happy” at you from a speaker hidden in a fake rock, is obviously an exasperating and demeaning place to work, forces you to make awkwardly stilted public small talk while standing in a three hour line to be placed into a giant and menacing machine that will jumble your insides and nauseate you, feeling that the awkwardly stilted public small talk of the other people surrounding you is somehow inferior to your own even though it is not, the class-warfare culture of such feelings seemingly the result of some chemical pheromone spray emanating from everywhere, and all of this being transparently and without remorse solely for the benefit of a multinational corporation with a $3.18B market cap, 12% of which may be owned by your own personal single least favorite rich person.

But also: they make it look all spooky during Halloween, and my girlfriend’s niece and nephew had passes.

I kept making the joke that I was ready to leave. It was not a joke. It was one of those jokes where you say the truth in a presentational enough manner and people laugh, and then you proceed, feeling at least a little less lonely about the truth.

It became immediately clear, via the oblivious and distracted but also engaged and purposeful meandering body language of a clearly enthusiastic twelve year old, that my girlfriend’s nephew had no intention of wasting any of his precious Saturday night hanging out with my girlfriend, or my girlfriend’s niece, or my girlfriend’s mother. Or me for that matter. He had business to attend to. I was placed on Hang Out With This Kid duty, which was fine. He’s a good kid. But following a twelve year old around Six Flags is a different kind of night than the one I was expecting.

We walked around where the scary people are. What the scary people do is they look for somebody in the crowd who is not focused on “where are the scary people” or looks like they would be easily scared, and then they like walk up to them or right behind them or pop out around the corner at them and say something annoying like “hey sexy,” and if the person they say this to is either a black male or a white female aged 12-14, that person loses their shit and screams and runs away and does like an “I am so scared right now” dance. I was disappointed that they didn’t try and scare me, but I get it. It’s a numbers game. I’m 34 years old. These people know that if they want to scare me they have to show me mail from the I.R.S. that says “you missed your deadline to file Schedule C in 2012, we are proceeding with legal blah blah blah.” So they pretty much left me alone.

There was an area where you go to see scary people, and we talked to one scary person. She was somewhere in her mid twenties to late thirties and had this character shtick where she was the owner of a scary beauty shop which offered like skin-removal treatments and stuff. She had a Hillary Clinton business suit and wig and burned and scarred face makeup, sort of a horror mask for the Benghazi set. She seemed perfectly happy to talk to us for hours on end, improvising about not at all scary (to be scary you need to be specific and take your time, like “throw some acid on your face” is not scary, but “slowly puncture each of your eyeballs with a cocktail toothpick” is scary) horrific beauty treatments, in a wandering accent.

At one point she said something about using her bare hands to claw my face off and then did this weird “look at my clawlike hands” thing where she put her claw-posture hands really close to my face. Leading with the ring finger, which had an engagement ring and wedding band on it, seemed intentional. If so I don’t know what the message was. I began to feel uncomfortable with the idea that this person may have assumed that a “Hey buddy, I’m spoken for” message might have been warranted. It was very not warranted. And then I thought, “Oh God, this person is enjoying this interaction, this is fun for her, and may additionally satisfy some deep emotional longing,” and that was the most scared I was of anything all night. Theater majors are terrifying. 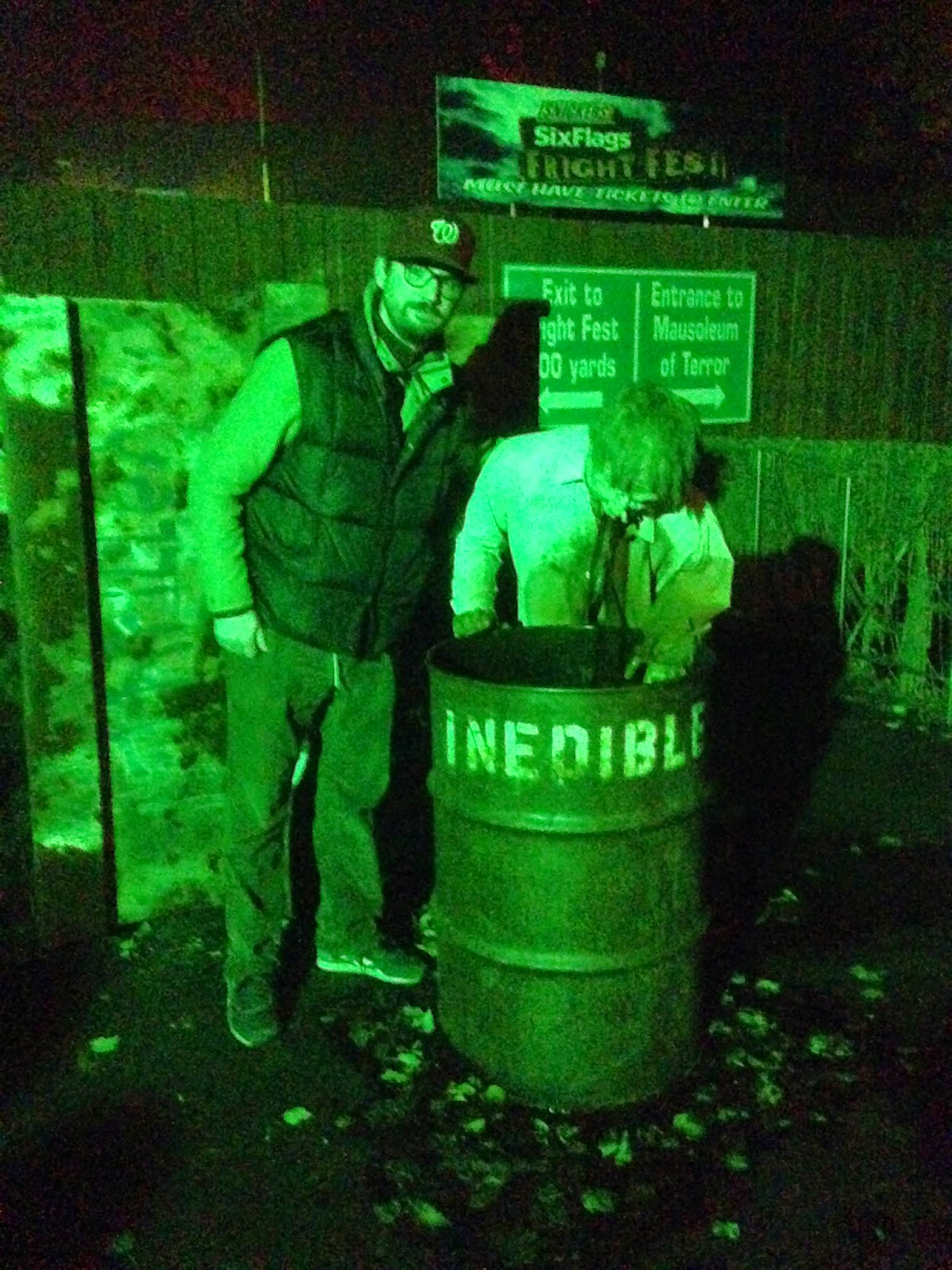 Then there was a vomit robot. A robot that vomits. Into a barrel marked “inedible.” It sits there until its robot vomit reservoirs are full, and then it plays vomit noises from out of some vomit noise speakers, and it vomits again. It vomits at regular intervals, presumably, all night long. Vomit Robot was my favorite thing at Six Flags, because the Vomit Robot is Six Flags incarnate in an oddly soothing way. Vomit Robot is tasteless and nauseating and fake. Vomit Robot does not hold up to scrutiny. It is a nozzle covered in face-shaped latex with a timer and a greeting card sound file mechanism. But: you know what to expect with Vomit Robot. The robot vomits, is quiet for a blessed few minutes, and then vomits again. Vomit Robot is doomed to a lifetime of repetitive vomiting, but Vomit Robot does not mind this because Vomit Robot is not an actual person vomiting, and is instead a machine perfectly designed to vomit, and cannot feel the sensation of drudgery. I wanted to hang out next to Vomit Robot until it was time to go home.

Then we all ate pizza. The pizza place inside of Six Flags that we went to is one of those cinderblock dispensaries of heated cardboard cut into foodlike shapes where valiant teenaged service workers wince apologetically about their kitchen’s basic schematic inability to actually produce the required food in a sufficiently expedient manner to avoid what feels like an impending riot. There is no entrance to this pizza place other than the line. It is a mechanized factory slaughterhouse of pizza. The pizza is not good or cheap, but much more so than either of those actual pizza-based concerns, it is also so slow to arrive that the entire ritual becomes masterpiece of expectation management.

I ate an entire packet of hot pepper flakes. My girlfriend’s niece was daring her brother to do it, so I gulped the peppers down just to speed the proceedings along. It was funny, and whatever, those peppers are not that hot. But destabilizing my gut in this manner was a critical tactical error.

Next came the part of the night when the nephew wanted to go on rides. Which rides? All of them, if possible. But especially the rides with the shortest wait times. These were the carnie rides. The puke machines with names like “Cyclotron” and “Orbit” and “Reactor Core” that involve whipping you in a series of circles along multiple axes. I rode these so the nephew wouldn’t have to ride them alone. I have memories of being the only kid who wanted to go on rides. They are sad. So I rode with the kid.

I did the one that’s small circles within a larger circle, and the one that’s like an angry, aggressively misanthropic Ferris Wheel from hell. I rode on the old metal coaster from the 80’s with the weird loungey theme song, the one that rattles your head against itself while the rest of your body does loops. I would go on a ride, and the kid would say “again?” and I would not go again but the kid would. I remember being that exact kid, and having no feeling of gratitude that I didn’t have to do the first ride alone. Just, “Your loss, chump, there’s no wait!” and gleeful running towards gleeful bodily disorientation.

At one point my girlfriend caught up to us and said “you look green,” and I felt like I looked green. In fact I felt green, all the way through to my marrow. Buzzing neon Rolling Rock sign at an exurban roadside bar full of tobacco-dipping dirtbike owners flashing me mean looks green. Where is this place and how did I end up here and why am I still going and what am I still curious about this far past the end of the line green.

We rode the kiddie coaster. The Little Dipper. Formerly of Kiddieland, rescued and reconstructed and gently rebranded by Six Flags. It may be the only roller coaster in America which I am still capable of enjoying. I don’t know. I would have also rode and probably also enjoyed the larger wooden American Eagle, but the kid wanted to go on the puke machines, which he inaccurately described as “not one of those puke machines.”

Towards the end of the night there was a show and a parade comprised of all the scary people singing and dancing to scary-themed songs such as a lyrically modified “Get Ur Freak On” with lighting and costumes and production values and choreography. It is the kind of thing which is simultaneously the result of hours of hard work and a complete afterthought.

The nephew looks at the clock, turns to me, and says “Vertical Velocity probably doesn’t have a line, we can still make it if we run.” I can tell from the look in his eyes that I am about to run a mile, and then get into a machine that straps you into a dangling seat, then shoots you up towards the sky while twisting, then plummets you back down and backwards up again, and then up and then back again three or four or five or infinite times. I can tell I am going to be too worried about my hat and my glasses and my neck and my dignity during all this to actually enjoy anything that happens. I know that the nervous anticipation before this thing shoots my body into the cold October sky is an autoimmune stress response to stimuli, and I hate my stupid body for producing the enzymes which constitute any funlike sensation, and I hate Six Flags for manipulating my poor unthinking body in such a way.

But I did not puke. Puking is for the Vomit Robot, and I am not a Vomit Robot. I am a Vomit Human Being. A willing customer of Six Flags. A shaky green ancient nomadic beast full of hot peppers and utterly drained.

On the drive home, my girlfriend's mother kept me from falling asleep at the wheel by describing a horrible speed boat accident she saw on TV. She is a wonderful woman.