Billionaires Are Idiots; They Should Be Killing Us 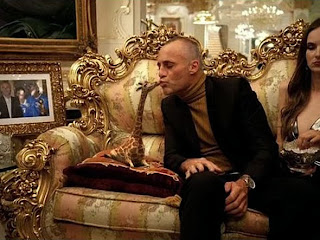 Regular rockbiting doghumpers the world over may have heard and been totally outraged by recent reports that billionaires have doubled their wealth since 2009. Billionaires doubling their wealth is crazy. That’s like, hey, I was born a screaming baby with effectively zero dollars and then I did a bunch of stuff and then I got a BILLION of the dollars that exist in the world, and now since 2009 it’s like I did the same thing all over again, but this time it only took me four years, and now I have TWO billion of those dollars.

In comparison, I haven’t been able to double my wealth in the last four years, and I currently have negative 147 dollars in my checking account. If you’re only a pudslapping sludge monkey like most of the world’s mortal population, you might be familiar with this conundrum. Doubling negative 147 dollars is easy as shit. Apparently, and my billionaire readers can probably back me up on this, doubling a billion dollars is equally easy.

Because I read something in one of those reports on CNBC.com, “Inside Wealth” edited by Robert Frank, wherein the smiling bootlicker of a journalist pronounces ultimate ruin to us mudsucking bottom feeders in the subtext of giddy reportage on who on the face of this doomed planet is currently living the good life. Here’s what that one I linked to, the one about billionaires doubling their wealth in the last 4 years, says: “Billionaires like to keep their families relatively small, with an average of 2.1 kids, though about a third of them have three or more.”

Let me get this straight. You people, billionaires, have more than one billion dollars, and your strategy is “give it to two people” and then calling it a day? Like your strategy strategy? What if those two people get involved in some kind of a fatal catamaran disaster? What’s going to happen to your super-special billionaire DNA then, smart guy? It’s going to end up in a landfill like the rest of us. You know, the Big Idiot Patch. Dirt Nap City, USA, The World. Goldfield, Arizona. Dead Forever, in other words.

How did you even get that billion dollars? By being dumb? A billion bucks ought to buy you out of the whole evolutionary cul-de-sac fate. Some of us don’t have any money and even fewer brains, and we’re having five, ten, twenty babies. We’re Babies“R”Us up in this motherfucker. You’ve got two super rich ones? That’s horseshit. You billionaires are getting soft. In the game of survival, you want quantity over quality every time. Life ain’t a stay at the North Island Lodge. Like it or not, you’re pit-fighting in the kneedeep muck like the rest of us. Take the long view.

Sure, you can have two kids and then surround them with a huge fortress made of hundred dollar bills that will theoretically insulate them against the vicissitudes of history, and then you can step back and hope for the best. Maybe you could take a more active role with your 2.1 kids; give them just enough cash to remain vapid, useless vessels of your chromosomes, and send the rest off to space research things, and hope your progeny retains their socioeconomic footing long enough to scam their way onto the first flight off of this godforsaken rock. Seems like pretty long odds for immortality, though. Especially since you’ve probably been ignoring the shit out of your kids for however long it took you to go out and get a billion dollars together. They’re probably going to blow all of your money, because they probably hate you.

Of course we don’t know what these billionaires are really doing with their money (other than spending an average of $22 million on yachts—an even worse resource allocation than having only 2.1 children, if you think about it). Maybe they’re having their sperm placed in lava-proof canisters and injected directly into the earth’s core. Maybe they’re having their DNA encoded into the cellular makeup of a genetically engineered super-survivor species, like a Bill Gates cockroach or Oprah Winfrey kudzu. But they’re probably not doing anything smart like that. They’re probably just blowing their dough on private flights to Istanbul and a bunch of worthless Cézannes. You know, idiot shit, a.k.a. Pigfucker’s Delight. Exploring the relatively mundane limits of the things a terrestrial hairless ape can do within the space of 90 years or so.

You know who had the world figured out? Genghis Kahn. When that guy ruined everything, he REALLY ruined it. He burned down villages and killed everybody in them and took the women and made them his. That’s the way to do it. You don’t just compile a bunch of money, in effect ensuring that money never ever falls into the hands of a bunch of people who are halfway around the world, and then just say “tough luck, guys,” and then go on whistling with the rest of your life, acting like you’re actually a nice guy to your 2.1 kids. You have to burn those poor people to the ground and replace them with your people. Like how Genghis Kahn did.

Today’s billionaires are a bunch of pussies. They’re spending all their money on making sure their butts are comfortable. Meanwhile, the rest of us are out here surviving. Billionaires are allowing that. That’s on them. This is all on their watch.

You can’t be a pussy about this. If you stop halfway at “well at least I have all the money there is,” all you’re doing is creating worldwide slums which are a breeding ground for drug-resistant super bacteria that is some day absolutely going to float across the air and onto your great grandkids’ private island. Or maybe your extremely precious 2.1 kids could get swept away in a superstorm generated by runaway global climate change caused largely by emissions from developing nations full of poor people. Or how about there’s some political instability caused by fighting for diminishing resources as the world’s human population zooms past sustainability, and some wingnut gets his hands on a nuke and points it towards Where The Rich People Are, Coordinates Your Asshole Kids’ House? I mean, anything could happen. You can’t even imagine all the shit that could happen. But you’re fine with 2.1 kids? Grow some nads.

What’s all that money going to buy you the way you’re using it? Two, maybe three centuries of prosperity for your (pitifully small in number) offspring before they are very likely to be destroyed in some large-scale global catastrophe? The way things are going on planet earth, you could be looking at decades rather than centuries. You, Mr. Billionaire with all the money there currently is, and we’re here talking about decades worth of 2.1 people not dying. That’s some weak shit right there, billionaires. You can do better than that.

Take Genghis Kahn for example. Did he sit around going “hmmm, Mongol Empire, pretty nice, I think I’ll relax and pay some obsequious clown to rub endangered species eggs into my face skin?” Hell no. Genghis Kahn got off his fat billionaire ass and looted, burned, pillaged, and raped his way across Eurasia. And look at him now. He died 786 years ago and he’s still livin’ large, a direct ancestor of 0.5% of the world’s male population. Not only was that probably fun as hell what with all the jizzing it must have involved, and not only is he still “hot,” getting a ton of publicity in blogs like this one almost 800 years after dying, but that is also the smartest possible use of Genghis Kahn’s limitless resources in terms of ensuring the continuance of his genetic material.

Odds are one of Kahn’s 16+ million modern descendants will probably be able to just shrug off a super bacteria or worldwide food supply collapse or nuclear apocalypse. None of those things even existed 786 years ago, but good old Papa Genghis is doing just fine today thanks to solid execution of a simple ten step game plan.

Billionaires are trying to do this all backwards. Oh sure, they’re dominating our asses off. I’ll give them that. They also have the rake in the money part down cold, and billionaires deserve kudos for that, because they can literally buy most of us. But then look at that list in reverse: they’re going to die before they ever get like two thousand women pregnant, and they’re not gonna eliminate everybody who’s not them, even though we’re literally begging for it. That don’t make no sense. If you’re gonna wreck everything, and billionaires are surely wrecking everything, don’t pull up lame when you get to the edge of greatness. Plunge forward. Genocide us. Burn our villages. Take our women. You might as well, billionaires. Have you ever been inside a K-Mart? Try it sometime. You’ll see. Our lives are like interminable waking nightmares. Have mercy on us and end it all. Please.

Billionaires: you’re in a position to make a difference, here. Have a heart. Doing things the way you’re doing them it isn’t helping anybody. The rest of us are just going to sit around having babies and not killing each other in sufficient numbers until we finally either breed a huge deadly disease or alter the earth’s climate sufficiently to cause indiscriminate destruction on a massive scale. Did you hear what I said? INDISCRIMINATE destruction. That means rising sea levels and global pandemics washing over your 2.1 children as they huddle in fear in your palatial Hamptons estate. Don’t let that happen, billionaires. Kill us all instead. Take out the middle man. Replace us with your godlike seed. You have the power.

I’m sure you billionaires have one megalomaniac who could pull it off. Right? What about one of the Russians? Those guys are fishy as shit. Or maybe one of the Mexican drug cartels will have the balls to pull it off now that their operations are basically legal. Maybe one of your 2.1 devil spawn will emerge as the prolific Caligula of mass extinction and global rape which we all so sorely need. I mean, at this point it's not like things are going to fix themselves. They need to break faster and more totally so they can start getting better again. Like the Philadelphia 76ers, except globally. You've got to be cruel to be kind.

Anyway, thanks for listening. Now get out there and fuck us.