I Am A Sexist Pig And I Live In A Hole 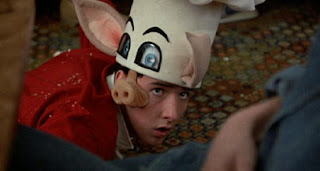 Now try talking about sexism or racism or anything, really, when you're a heterosexual white guy. It's the same. You're in a hole and all you have is this shovel, and you go "maybe if I..." and then you try, delicately, to articulate the perfect angle of the shovel into the dirt, and then no matter what more dirt falls on you and you're still in a hole, and you start flailing wildly and nothing helps.

I got in another little Twitter spat recently. It was childish, like all Twitter spats, and entirely my fault, like all Twitter spats I am involved in. Basically I said a bunch of stupid stuff that I don't really care about and therefore regret saying, about a thing I didn't even try to understand, to a person who was already upset before I got there. That about sums it up. You know: a fuckup. A human thing. The lesson I keep not learning. Keep your mouth shut and stay in your hole.

You can read my twitter feed for the particulars, but beware: you will be bored.

Twitter fights are stupid. Using Twitter as a referendum on who's right and who's wrong when you're limited to 140 characters and only people who already like you can see what you're saying is also pretty stupid. But I don't want to minimize what I did. I, a white heterosexual dude, said some things, publicly, on the subject of feminism that some very respectable people found unsuitably feminist, and I said them in an unfeminist manner, and then I backpedaled like a typical misogynist chickenshit. Now I'm writing a blog post about all of this. All of which is something I chose to do with my time instead of shoving my phone up my ass and singing "I'm A Little Teapot," which would have been equally sensible, just as relevant, and arguably more productive.

I am a sexist.

I'm not proud of that, but there it is. I'm not a woman, I don't know what it's like to be a woman, I can't ever know what it's like to be a woman, and so on a fundamental level, as much as I hate to admit it, I don't care what it’s like to be a woman. Sure, I can put on my "empathetic to all human plight regardless of gender" helmet, and try to respect everybody as a human being on this difficult and fascinating journey we call life, but sometimes I fuck up and dehumanize somebody who's taking seven minutes to decide what holiday stamps they want to buy when I'm in line at the post office, and then instead of Kumbaya it’s “Move it you cretin, some of us have very important LP’s to ship to a guy in Belgium.” That this is probably a common flaw for all people doesn’t excuse it. I still have to do my best.

Unfortunately, even at my very most empathetic, my point of view is only ever going to come from my white guy brain, and it is going to be skewed and unrealistic. I am never going to relate to what it's like to be a woman. I can try harder than currently, but the closest I can ever get is some shadow of a thing, rife with inaccuracies, and I will be justifiably yelled at for getting it wrong if I'm ever stupid enough to try and share it. I guess the idea is to fail and then learn. But it's frustrating. Trying your best and then being told your best isn't good enough is frustrating. It can make you want to not try.

I'd theorize here that this feeling of frustration is common to the general plight of women as well, but that's probably patronizing. I really can't say anything about that. It won't help the world, and it sure as shit won't help me. Stay in your hole. Shut up. Don't open your mouth about feminism if you're a dude. It's a bummer when you talk, is the point. Listen. Try. As hard as you can, but harder. Grow. Try even harder than you even can. Listen. Grow some more. Grow until you are a tyrannosaurus of understanding, quietly crying alone in a hole.

Don't expect any empathy from anybody else. You don't deserve it because you're the problem. You don't like it, tough shit. Take it like a man. Them's the breaks. You are in a position of privilege, and in order to be considered a good person by the rest of us, you have to deny that privilege as often as possible.

It's a pretty tall order. Sometimes I just let it drop. All of us white guys do, more or less. That's why everything's still so fucked up. Being transgressive can feel fun and liberating. Just ask Miley Cyrus. People by their nature tend towards doing what they think is fun and what they think is liberating. When you combine a power structure with that natural individual proclivity towards fun and liberation and transgressions, all of a sudden you have destructive norms, seemingly by accident, through the combined selfishness of millions of individuals, some of whom are even members of the Collective Of Billionaires Who Get To Decide Everything. And therefore a guy like me (not a billionaire), who despite my many faults (churlishness, arrogance, privilege) does at least actually think about this stuff (obsequiousness, cowardice, sarcasm), still can't catch a break. Oh poor baby me. Of course I cop a "fuck it" attitude from time to time. We all do, all humans, but most hurtfully the most powerful ones.

To justify my complicity in sexism, I pretend I have enough to worry about just by being an alive human being. I daydream about how impossible and traumatic life is for everybody, and I feel a surge of connection and empathy whenever I do this. Even, say, Jay-Z. Jay-Z is fucking Jay-Z and his wife is Beyoncé, and he’s still going to die. He wakes up every day knowing that. Talk about a raw deal. That’s traumatic. We’re all here and we’re all gonna die, and then one day billions of years from now our entire planet will be enveloped by our expanding sun, and nothing we do or say will ever matter, no matter what, and there are so many of us and only so much stuff we can have in our lives, and at the same time we all have to try to be nice to each other because we’re all we’ve got. It’s impossible.

I like to think that life is hard for everybody, even me, but that's probably wrong. My life is probably so easy that all women and 99% of the earth's men would swap lives with me in a heartbeat, even though I’m basically just a miserable turd. I at least have all the tools a person needs to not be a miserable turd. I should appreciate that more. I should help people more. I should be nicer. I should walk around in a state of bliss, heart open to the world and all of my fellow humans. We all should, but especially me because I was born at the top of the scrap heap with a white penis, and I therefore ruin things worse than anybody else when I switch to "me first" mode.

I'm not being sarcastic. I believe all of these things. The fact that I, me, a white guy, am out in the world talking shit and offhandedly bothering strangers by acting like a big smart guy on Twitter, sometimes or ever, is a huge huge shortcoming of mine. I hate that about myself. I should be doing better than this.

You know when somebody says you're wrong, and they're actually correct in saying that, it's worse than if they're just talking out of their ass? That's this. The good news is that feeling bad about myself, as the Judeo-Christian tradition goes, is the only way for me to know I’m a good person. So mission accomplished there, I guess. I'm a sexist and I have no defense for that. I don't get to "explain my side" or convince anybody that "I'm really not such a bad guy once you get to know me" or, God help us, write up a listicle of dating tips for male feminists. Because I know what’s right (them) and what’s wrong (me), I’m not even interested in doing any of that. I get to just sit in my hole, powerless in the knowledge of my own failures as a human, until I die. And it serves me right.

But I will say this: it's fucking BORING in this hole. Sometimes I'm going to talk just to hear myself speak. La la loo loo loo. If the hiring practices of “major publications” filling pop music critic staff positions is the manifestation of institutionalized sexism currently impacting you most directly, you’re doing pretty fucking great compared to the rest of the world (including both women and men). The fact that there even is such a thing in the world as a pop music critic staff position is its own form of gross, pervasive injustice. Grow up. It’s not like you’re feeding and clothing the huddled masses or inventing lightspeed rocket propulsion with your review of the latest Rihanna album, salient though it may have been. La la loo loo loo. That was fun. Don't mind me. I’m just here in my hole. A filthy, sexist piece of shit. With a shovel.