Mansplaining The Chris Kluwe Situation To A Gay Lesbian 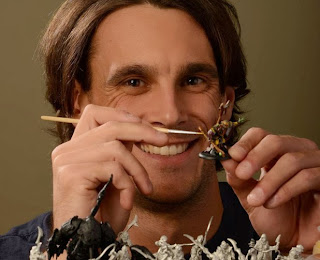 Our editorial board consists of a red-blooded Caucasian American heterosexual asshole sports fan man and a gay lesbian weirdo with a borderline unhealthy Beyoncé fixation, but when it comes to hard-hitting journalism, we always see eye to eye. That's how we offer up such great and relevant "hot takes" whenever a situation like the most recent Chris Kluwe thing, which is both a sports thing and a gay thing, pops up. First, though, Ben Johnson had to mansplain the situation to Kelly McClure. Actually, technically, he didn't have to, but he acted like he had to because that's how mansplaining works.

BEN: Hi Kelly. You are a lesbian. Now I'm going to tell you about this Chris Kluwe situation because it's a sports thing and a gay thing, and you are a close gay friend of mine but also you don't know as much as I do about sports. Okay? I'm just kidding, I don't care if you think that's okay. I'm going to do this regardless of what you'd prefer because I am a man and men rape and when men rape your ears by talking in boring words it's called "mansplaining." You may have heard of it? Mansplaining? Or do I have to mansplain mansplaining?

KELLY: I feel like this is about Germany and I'm not sure why. I read what you wrote and my face made a face and I literally thought "is this about Germany?"

My GF and I went to a NYE party the other night and she made a joke about beig molested and I was the only person who laughed. I don't know what made me just think of that.

BEN: This guy Chris Kluwe was the punter for the Minnesota Vikings until like a year ago. I don't know if he's of German descent. I saw him on Colbert once and he seems just like a general American nerd but with muscles.

Just so you know, a punter in football is the little guy who catches the ball while standing up and then kicks it very high and far. He's not the kicker, though. The kicker kicks the ball when it's on the ground on a little tree, or when some other dude is holding it on the ground. In terms of how important they are to the team, punters are generally regarded as being like one step away from just not playing football at all. Having a good punter is better than having a shitty one, but nowhere near as much as the difference between a good quarterback and a shitty quarterback. But Chris Kluwe is a good punter. He's pretty good at punting when he punts the football in his punting job.

Anyway, this punter, Chris Kluwe, got a bunch of media attention a couple years ago for writing a letter to that one homophobic Maryland state representative who told a different football team to make its player not advocate for legalized same sex marriage in the state of Maryland. Does that sound kind of familiar yet? I feel like it was a big gay story, but it might have just been a big story for the sports-fans-who-don't-hate-gay-people community.

Help me out here, Kelly. Mansplaining is hard work. Where are we on the whole punter/Chris Kluwe is a guy/gay stuff angles? All caught up?

KELLY: Kicking a ball. Gay letter. Got it. So wait, this German guy was writing a letter to tell his friend to stop being mean to homos? I feel like that's a nice thing to do.

On a related note, I accidentally saw a picture of balls (like ball balls, not sports balls) a few minutes ago and I thought they were pubes. It was a picture of a man nude from the waist down and it looked like he had the smallest peener ever just swimming in some massive pubes, when in reality he had the smallest peener ever just laying against some massive balls. There were pubes somewhere though. Up top I guess.

BEN: Yeah, balls are weird, but they're not pubes.

He says his bosses at the Minnesota Vikings football team were all chickenshit bastards, except the one of them, his most direct boss, the coach in charge of the part of the team that does punts, was a raging homophobe too. Apparently, according to the German guy, this coach said that gays should be deported to an island and that island should have nuclear bombs dropped on it "until it glows." And then the other bosses in the team were like "hey, German guy, can you please stop advocating for gay rights, it's cramping our style" (I'm paraphrasing), and the German guy said "no I will not do that, because I am like that guy from the Grapes of Wrath, except for gay people getting married" (still paraphrasing). So they fired the German guy because he was a "distraction" to the team, or something, and now he can't get a job punting a football for a living any more because he told on the bosses, but they probably blacklisted him first for being a punter (punters are replaceable) and not listening to them when they told him to shut up about his beliefs.

Anyhow the German guy said all this stuff today, and it'll probably be a shitstorm in the sports media, and everybody's going to be talking about it for a while. So I thought since you're a gay friend of mine who doesn't know anything about sports, I could mansplain the situation to you and you could spit out a relevant opinion that we could all settle on. So what do you think?

KELLY: Well I think a few things about this. I think that this German ball kicker is the type of sports guy who actually deserves to touch multiple vaginas per night and then drive home in a fancy car. Most sports guys do NOT deserve this. Most sports guys deserve full-blown AIDS. (Sorry Magic. Sorry whoever else has AIDS). A manly sports guy who says "don't be a fag, fags are cool" deserves to have his privates licked. I'd maybe go for a slice of pizza with this guy. I'm not sure though. Is he very tall? Aside from all that, I'm also maybe thinking that he might just be inclined to put his own balls on other balls. Is anyone else thinking this? Did I just ruin it? Either way, this guy seems legit and should get all the vaginas or balls - any type of balls he may be corresponding with at the time - that he wants.

Also, Chris Kluwe is married to a woman.

Good work everybody here, but especially me.

KELLY: If "woman" is the German translation of "Man who likes penis in butt" then we're on the same page here.