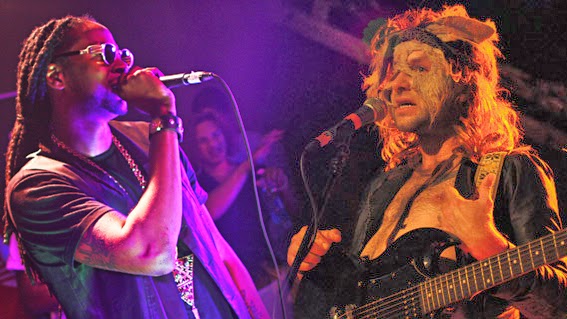 Mid-way through “Blow Dumb,” the tune that lifts the riff directly from the Velvet Underground’s “Sister Ray”, Nobunny actually starts singing “I’m searching for my mainline” and, since “Sister Ray” is the greatest song ever, I decide to show my appreciation.  I start by pushing a buncha people and jumping up and down, and then I start throwing my arms sideways like a spazzed out orangutan, and I’ve just been hollering along with Nobunny the whole time, and it’s just the greatest two verses of music I’ve heard live all year. I’ve caused some sort of disruption in the night, I’ve made a couple people ask themselves “what’s with that guy?”, and that’s what I was aiming for, so as the song ends I feel satisfied enough to retire to the sidelines and take in the rest of the Nobunny experience from calmer waters.  I’m wearing four layers of clothes cuz it’s fuckin’ freezing outside, but it’s a packed and sold-out Middle East Upstairs, so I’m screwed either way, and the sweat is now coming in rapid bursts of discomfort, and by the end of my spasm for “Blow Dumb” I am completely caked in my own body liquid.

Nobunny wouldn’t quite reach the heights of “Blow Dumb” for the rest of the night. The most enthusiastic reactions from the crowd occurred when he and his band played tracks from his 2008 release Love Visions.   In my completely subjective opinion, the main highlight of their 45-minute set was their tribute to Lou Reed, John Cale, Sterling Morrison, and Maureen Tucker.  This was the line-up for the Velvet Underground’s White Light/White Heat record, where “Sister Ray” appears, and takes up most of side 2.  All fountains of music that interest me nowadays spray forth from this record.

That same night, February 4, 2014, 2 Chainz and Pusha T had performed at The Boston House of Blues, a mere ten minutes from The Middle East Upstairs. I had purchased tickets to that show months in advance, mostly motivated by my interest in the new Pusha T record “My Name is My Name”.  From that album I had been introduced to 2 Chainz, who would be headlining.

I bought tickets to this show solely because of his standout guest verse on the song “Who I Am”: “Entrepreneur/Strip club connoisseur/Hot fudge sundae/Poor it on you, hallelujah”.  Was this the next ODB? I was certain that my slightly reckless purchase of three $50 tickets was a good, clear-headed choice.  When I heard Nobunny were also playing that night, I was pissed.  Then, I decided I would go to both.

I was reconsidering this decision while I was standing in line on Lansdowne Street with my two friends, waiting to enter The Boston House of Blues.  This line was more like an unhappy mob full of 2 Chainz fans, and the people were starting to get unruly, for we were not moving, and the concert was starting, and we were maybe missing Pusha T, and we were starting to get impatient.  Yes, standing near the sacred walls of Fenway Park was charming, and yes, being harassed by sidewalk vendors to buy their over-priced greasy sausages had its own strange appeal, but mostly we were starting to get disgruntled by the cold and lack of movement towards out destination.  The Boston House of Blues unintentionally lived up to their name on that night.

After standing in line for forty-five minutes, we discovered that the paranoid post-Boston Marathon security machinery had created this cluster fuck.  Before entering their fine establishment, The Boston House of Blues’ expressionless secret police demanded each and every of the nearly 2,500 attendees to empty their pockets, undo their belts, pull their pants down, bend over, cough, and untie their shoes.  After passing through this challenge, patrons had to endure another level of touchy-feely security.  At this checkpoint, intimate violation of each body part was encouraged via the ‘pat-down’ procedure.  Hands lingered especially on genitalia. Cigarette boxes then were studied for any signs of ricin or gunpowder.  Hats were pulled off and checked for dead animals.  Underwear was tested for any traces of fecal matter.

Forty-five minutes later, I finally entered the House of Blues, extremely traumatized, badly needing to urinate, and slightly turned on.  I wandered around in a daze for a few minutes, reflected on the pointlessness of existence and the ugly power of fear.  I then caught-up with my friends, and entered concert hall as Pusha T was launching into “Mercy,” the big hip hop hit of the summer that I had been completely ignorant of until a week before the show.  The smell of weed was ubiquitous, impressive considering the thorough security.

I saw thirty full minutes of Pusha T.  He sounded fiercest when choosing the best tracks from “My Name is My Name.”  I especially enjoyed “King Push”, “Numbers on the Board,” and “Pain”.  His tracks from Good Music’s “Cruel Summer,” sounded fine, though incomplete without the other MCs from those songs.  The inclusion of the repetitive R&B track “40 Acres”, another cut from his solo record, killed some momentum, and though finishing with “Grinding” sounds potentially good on paper, the beat didn’t hit the speakers hard enough, and its impact didn’t quite live up to my high expectations.  This was the only Clipse song he performed that night, which was disappointing.

Then, 2 Chainz got onstage.  The first twenty minutes of 2 Chainz was a marvelous, majestic spectacle that could only have been born in the year 2014.  The last twenty-five started getting repetitive, so I left.

Though the crowd had responded to Pusha T with great apathy, they freaked the fuck out for 2 Chainz. He has the stage presence of Busta Rhymes and the vocabulary of Lil’ Jon.  He looks and acts exactly like Seattle Seahawk Richard Sherman.

From what I observed, there was one absolute truth that I could surmise from the proceedings: 2 Chainz loves strippers.  My evidence lies with the songs “I Luv Dem Stripper” and “Birthday Song”, which features the chorus “All I want for my birthday/is a big booty ho’.  These tunes were accompanied by a digitized silhouette of two well-endowed strippers dancing on one stripper pole, performing a sort of battle of the booties, and doing all sorts of contortions that I was unsure were legal in Puritan New England.

2 Chainz cavorted around the stage with the confidence of a man in charge of his popular culture audience.  And his ridiculous over-the-top lyrical choices were funny at times.  “2 Chainz, 4 bracelets!” my friend shouted along at one point.  I was starting to appreciate 2 Chainz’s appeal, even if I didn’t know when to shout along.

Unfortunately, this charm quickly started to wear off, and by the time he had been on stage for forty-five minutes, I was starting to get a little tired.  After being completely flabbergasted at his choice of visual accompaniment and stripper-heavy content, I started getting pretty bored.  The novelty faded away as fast as it had come by, a nifty metaphor for ingesting popular culture in the year 2014.

Nobunny was supposedly getting on stage at 11:15 down the street at The Middle East, and it was 10:45, and although the Middle East was extremely close, I knew I would get lost, no matter the GPS, and inevitably, I did.

I got there at 11:25, and I chatted with the doorman, and he told me that things were running a little late, and that Nobunny would be getting on in around ten minutes.  We chatted about how cool it was that The Middle East and TT the Bear’s had been hosting more garage shows, and how great Purling Hiss had been in the fall, and how it was weird and unexpected that Parquet Courts had been sold out last summer at TT’s, and how I had traveled all the way from Providence to see them, only to be turned away at the door.  At least I had seen them open for The Breeders and totally blow Kim Deal outta the water.

I explained to this nice doorman that I had come from 2 Chainz, and he told me I was the only person he knew of that had accomplished this fairly ridiculous concert double-dip, and how he had also been offered a ticket to 2 Chainz, and had chosen Nobunny instead.  I whispered to him that he had made the right choice.