The Case for Baby Tailgating 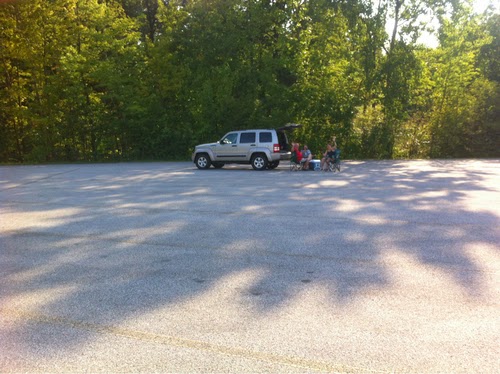 My friend Mike is having a baby today. I am genuinely excited for Mike, and for his wife Wendy, who when they first started dating we all called “his fwendy.”  I got a text message from him saying that the baby is on the way at 11:52am this morning, which if I was in Mike’s immediate family would be just about perfect timing for “hey look I get to leave work now and go be nervous and excited about Mike having a baby all day.” Instead, I’m still at work. I’m getting the occasional exciting text about baby progress, but am otherwise still just having a pretty shitty day at work. This is all happening because baby tailgating isn’t a thing. It should be.

I love Mike, but I’m not really in the small group of people in his sphere who should be comfortable rushing to the hospital to go be with him during baby time. My boss doesn’t know that. I’m sure if I had hopped into my boss’ office at 11:53am this morning all flustered and said “my friend Mike is having a baby! I gotta run to the hospital!” he would have been totally cool with me taking the rest of the day off to be genuinely excited about my friend Mike’s first baby. I also could have said those exact same words and then gone home and farted into my couch in between getting exciting baby texts instead of having a shitty day at work in between getting exciting baby texts. But I didn’t do either of those things.

I certainly didn’t choose not to do those things because I am dedicated to my job, or because I don’t like farting into my couch. I would run into my boss’ office all flustered and tell him I had just fucked a chicken if this was a socially accepted excuse to take the rest of the day off from work and fart into my couch all day. In such a fantasy world, I would do that EVERY DAY. It is THAT EASY to lie about having fucked a chicken. Excuses are arbitrary. All a good excuse needs to exist is for when you say it out loud at the office, every(boss)y’s response is an immediate “Oh my god! You’ve gotta get out of here! No, no, I won’t hear it!” It works for deaths or births in the family. It could just as easily work for chicken fucking. All it would take is a boss of the correct mindset to honestly think, “You just fucked a chicken, yeah yeah, say no more, go home and take the rest of the day off while you recover from that.”

The thing is, we as a people can decide what things we have that reaction to, and viola, more days off from work. It might happen slowly, but if enough people and eventually enough bosses start agreeing, we can make anything a totally legit excuse from work. It’s been working pretty well for snow days in Maryland. I submit that it is not every day that a person gets to meet a new baby that they care about. I also submit that a baby being born is very special thing, in the sense that bosses are usually pretty cool about it.

In fact, a baby being born is already a way legit excuse to miss work. The only reason I'm not at the hospital right now in my own nice little boss-judgment-free zone is that hospital waiting rooms suck. Bosses know this, and it explains their forgiving attitude about letting you leave the office with their blessing. “You’re going someplace more awful than this due to something that won’t happen often? Be my guest.”

The thing is, the waiting room is not the only place you can excitedly wait for a baby to be born.

When my brother had a baby a while ago, I warned my boss ahead of time that I was going to drop everything and run to the hospital. I knew I wanted to be there no matter what, to meet this baby when it was still purple and sticky. I knew this so early that I had time to think about how much hospital waiting rooms suck, and even the birth of my first nephew was not enough to have me over the moon about spending an indecipherable amount of time in one. So we tailgated in the hospital parking lot.

I put together a kit ready to go at a moment’s notice, and 25 minutes after I got the text I was sitting in a comfy chair with a beer, waiting for the grill to warm up and my nephew to get borned. Family and friends came as quick they could, we toasted to the future, and 5 hours later I held my nephew for the first time. It was great, and it should totally be a thing.

If Mike had a baby tailgate party, I would be have been there at 12:08. I wouldn't even have tried to lie my boss about it. Not only is my close friend Mike about to have a baby I am excited about one day teaching how to gamble, but there is a tailgate in the parking lot, and I get to go because: babies, end of story. It would work because I’d have a valid case for being there when new little Mike Jr. is born, and also because even my boss would have to admit it is pretty genius.

If baby tailgating became a thing, and I honestly in my bones think it could, you could leave work and go hang out in a parking lot with your friends every time someone you are feasibly close enough with has a baby. That would be like sprinkling in 10-20 extra July fourth holidays, 20-50 if you know a lot of Catholics, into your life, at random times, and you’d have no idea how long each one would last. How is this not a thing?

Next time one of your loved ones has a baby, consider having a tailgate party in the hospital parking lot to wait for it to be born, and then tell everyone (especially bosses) how great it was. If not for me, do it for the imaginary person in the future who might one day take three consecutive days off from their shitty job because their cousin’s friend’s husband went into labor and it took forever.

And also me. Do it for me. I’d much rather be in a parking lot with my friends than here getting shit from Pam because I just accidentally gave my boss his own birthday card to sign.

Oh man! Mike’s baby is here. Never mind, do it for little Brayden Thomas Anderson. Welcome to the world little buddy. If I can pull it off, someday you’ll get a chance to write your boss an email that says “I’m out of here for a while, go fuck yourself” as politely as possible, and you’ll get away with it. I’m all about boss science and the future.