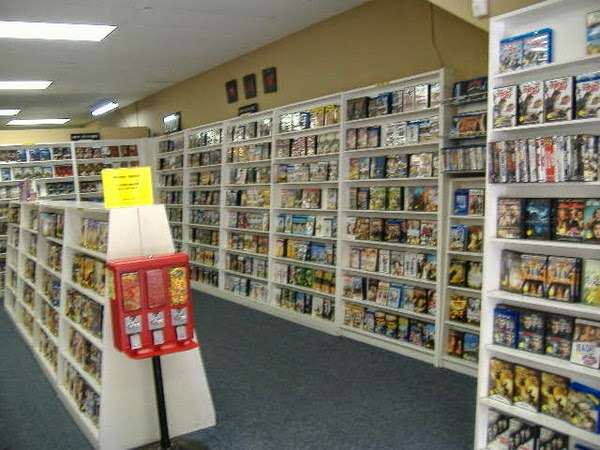 "I haven't left the apartment in five days," Erin says to her roommate through the receiver of the cell phone dangling off her chin. "I'm trying to find that video store we went to that one time. The one where we bought all those old Joan Crawford VHS tapes for a dollar. Do you remember where it was?"

"Wait, I don't understand," Steph (the roommate) replies. "So when I leave for work, you're just, like, there? What do you do all day? And who goes to video stores any more? I think it's on Franklin."

"I work, Steph. I work from home. It's a thing. A normal thing. I have a very enriched life."

As she said this, she noticed that her legs were wobbly from not having been used enough the past week. She tried to correct her stride while crossing the street. She felt crazy. She wondered if she looked crazy. Sometimes she got so out of sorts the minute she left the house that she could feel herself going blind. Going blind in this way where she could see so much, every person, every trash can, every clump of dried up dog poop on the sidewalk, that it became over stimulating and her eyes started to just close in on themselves like tiny brown umbrellas. She thought about how her Dad always tells her to get out more, see the world, and how it will never be altogether possible for her to fully explain to him, or anyone, that there are things in "the world" that she just doesn't want to see, and that can't be filtered out. "Like that lady over there scratching her vagina through sweatpants in front of the Dunkin Donuts," she thinks to herself.

"I know. My backbone weighs one million pounds and it's crushing me." Erin followed this up with a laugh that was a bit too practiced and loud because she knew that Steph had no idea what she was talking about, and didn't care anyway. Her favorite TV show was Felicity, like actual reruns of Felicity on Hulu. Her opinion obviously didn't matter.

"Alright then. I'm at the video store. I'll talk to you later. Wait. Do you want anything from here?" Erin asked.

"Yeah. Please get me a box of Red Vines and Point Break The Musical. I think it's in the new releases section. NO I don't want anything from the video store! Freak!" Steph said, and then disconnected the call. She wasn't very nice. Point Break The Musical would be awesome, Erin thought and she walked into the store.

Immediately inside Erin began to sweat. Upon starting to sweat, she started up her usual inner monologue that took place whenever she was on the brink of a mental breakdown situation in public that went something like: "Why are you such a retarded idiot? Why do you always have to act like an actual crazy person? It's just a store. It's just the outside world. You're going to die and people will refer to you as "that person who had breakdowns in stores all the time while also always sweating."' Sometimes this inner monologue made Erin laugh. Sometimes it made her laugh out loud. Which didn't really help her case much.

She started for the back of the store where the used VHS tapes were and passed by a row of windows. Out of the corner of her eye she saw a lady sitting in the passenger side of a red Jeep Cherokee, holding a lit cigarette out of the open window while she waited for her family, or so Erin presumed. This immediately made Erin think of her Mom, who wasn't around to wait for anybody in the passenger seat of Jeeps anymore, because she was dead. This fact didn't seem real, but what did seem real was how the musty carpet smell of the video store, mixed with the plastic smell of tape cases, and a pinch of wet air conditioner filter for good measure took her right back to a time when she and her parents would go to Blockbuster Video for the usual: two new releases, one she liked and one her Dad liked, and two packs of microwave popcorn and that would be a big night for them. A nice night. Now that her Mom was gone and her Dad lived in a different state, Erin thought about how this made her a ghost. An almost orphan ghost who will haunt video stores forever and then try to hop in Jeeps with strange families to go watch movies in strange homes. Ridiculous.

"Are you over here talking to yourself, Erin McFadden?"

Erin turned around too fast to see who had just spoken and knocked over a little clump of mini chocolate bars that had been set up on a display table that she had subconsciously been hiding behind while browsing. She left the candy on the floor and focused her attention on the person in front of her, James, a guy that she knew from the internet but hadn't met in real life until just then. That's a thing that is a normal thing now. Which is neither depressing or exciting or anything else. It's just a thing.

"James from the internet!" Erin said to James from the internet. She wondered if she sounded like a normal person when she said this, or if she sounded like someone who doesn't talk out loud to people very often. "What are you doing here? And yeah, I was talking to myself. I'm a freelance writer who works from home. Talking to myself is part of my quality of life map."

James thumbed his name tag at Erin indicating that he worked at the shop. "I work here. Well, part time anyway. I'm saving up for a record player."

Something about that sentence made Erin want to immediately walk outside and lay down in the street.

"Oh! Well that's cool. It's probably nice to work in a place where you get to see other people. I pretty much spend every day alone with my cat, sitting on a chair staring at my computer. It must be nice to have a daily excuse to go outside. Maybe I should get a part-time job. Are you hiring?"

Halfway through what she had just said to James, which was a fairly short combination of sentences, as far as conversational sentences go, she noticed his eyes glass over. She had lost him and he was making the facial expression that Erin knew from experience meant that if she were to keep talking, he would interrupt her and start talking about something else, and then eventually walk away, so Erin just stopped talking. Being interrupted was Erin's biggest pet peeve. It happened to her often, because she was quiet and people who are loud assume that people who are quiet don't have anything to say. Or people who are loud are so loud that they don't hear well anymore and don't even notice when a quiet person is talking. Either way, it's annoying.

"I should get back up to the registers," James cut in with as she was about to ask about his fucking blog. "Want me to ring those up for you?"

Erin handed him her copies of Mildred Pierce (a steal at 99 cents) and Hotel New Hampshire and followed him to the front of the store. Once at the registers, James eyeballed her selections with a wrinkled brow.

"These any good?" James asked. "I've never even heard of them."

"They must be! I'm buying them!" Erin replied. She was over it. She just wanted to get on the bus home. She left the house today and now she can celebrate with movies and beer, her favorite antisocial pastime.

James handed her her change and did this sarcastic nod thing that people do when they do not at all relate to anything you've said, or will ever say in your life.

"Keep passing the open windows!" Erin said as she walked out the door. Her favorite line from Hotel New Hampshire. As she rounded the corner she snuck a peek at James, who was still looking at her. He was making a face like he had just smelled a really bad fart.

"Retard," Erin muttered under her breath as she situated herself in line for the bus.

As she waited it started to rain a little bit. Erin always liked the way the city smelled when it rained. It was a certain mixture of garbage and childhood purity that she couldn't quite describe. Warm, damp concrete is a childhood smell. Or maybe it's just a specific smell that can be attached to anything. She was staring at the ground while thinking about this, watching the rain drops collect and change the color of the sidewalk under feet, when the lady behind her elbowed her with her sticky, bloated elbow - indicating the line to get on the bus was moving. Erin bit the inside of her lip as her whole body grew hot with anger at the moment of being interrupted, even if just interrupted in her head. Her mouth filled with the taste of blood and she turned back to the woman who had poked her and spat the blood onto the lenses of her glasses. The blood stuck there in the humidity on her lenses.

Erin got on the bus home.