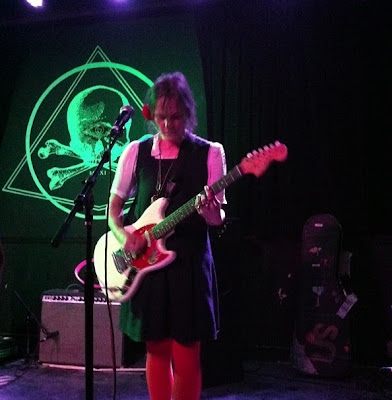 I was supposed to interview Scout for an online magazine for free but I decided, prior to the show, that I don't really want to write for any publication for free unless it's this one. Aside from that, I'm into this whole thing now where I spend money on the things that I like going to, and then spend my time at the thing enjoying myself, rather than standing there having volcano gas because I'm nervous about having to talk to someone about something. My main career now, aside from my actual career, is enjoying my life - which is nice.

Do you know what else is nice? This. In February Scout Niblett, who is my GF's favorite performer, agreed to write out a Valentine's Day message to her and take a picture of herself holding it, which would then be used as the main image in the album announcement I did for her. This is probably the nicest thing to ever happen to me, and to us, that someone else caused to happen. Most people in our lives are cooters and ding dongs. But not Scout Niblett.  We were going to maybe say something in person to her about this at the show, and had about 55 opportunities to do so, but we just sat at the bar making commentary about things instead, and then, when she started performing, stood front and center, right in front of her face, where we knew it was a rule that nobody was supposed to talk to anybody about anything.

Most people know this rule, about how it's not okay to talk during shows, but few people give a shit about it. I personally prefer to spend my time at a show standing very still while putting an expression on my face that tells the person I'm watching "I love you in a non-threatening way." Some people though, like a certain fat man at this night's show, like to spend their time yelling things like "you know how to play that thing don't you?" And then tossing a beer can at the performer's head while her eyes are closed and she's singing an emotional song.

One minute, I'm standing there watching Scout sing and thinking something along the lines of "I like that this is happening right now," and the next I see a empty PBR tall boy can fly through the air, buzz Scout's right ear, and clank to the middle of the stage. I made a open mouthed "oh no" face when this happened and then immediately locked eyes with Scout's guitar player who was making a "nice. Real nice" face. Scout's guitar player looked like a smaller version of Dermot Mulroney and I could tell that he thought every single person, apart from maybe me on account of us sharing that moment together, was stupid.

I'm sorry that someone threw a beer can at your head, Scout Niblett. You're really nice and great.