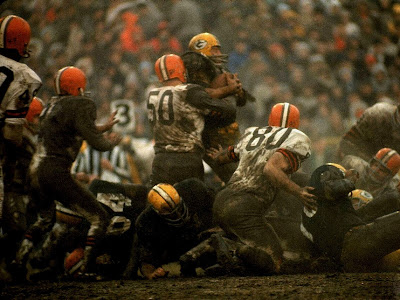 I am having a hard time containing my excitement about NFL football. I don’t know why. There are other better things to spend your time doing than grafting a couch onto your butt skin for 12 hours a Sunday while other men on TV smash each others’ brains into mush. I have a long list of other things I could be doing. Everything ever is on it.

I just moved into a new apartment with my girlfriend. We are doing it right. That means everything is going to be as close to perfect as we can get it, and then our apartment will feel like a complete home to us. That means I am maxing out my credit card at Home Depot and teaching myself to do things I don't want to do in order to physically manifest somebody else's wild impulse of a possible perfect thing. That means change and growth.

I am manufacturing opinions out of thin air with 90% of the words I’m speaking. I like the small teal picture frame there because it gives more of a flow to the wall, plus the color breaks up the pattern nicely. These words come out of my space alien mouth as unnaturally as if I’d said “what is word ‘love?’” as the title character in some touching nonexistent 80’s Disney live-action movie called The Boy Who Ate Roses. I am speaking in serious, measured tones about the tealness of a picture frame because those collected words and sounds seem like the kinds of things I should be thinking and saying at the time. So I dig deep into my bottomless inner well of bullshit, and I say them.

Sometimes these arbitrary hipshot opinions are immediately disregarded, and sometimes that is aggravating to me because of the effort just expended to haul some plausible word combination up out of the deep storage of vaguely remembered Martha Stewart monologues culled from absentminded stints in dentist office waiting rooms. Sometimes, when thus aggravated, I sigh too vocally, and as a result I sometimes discover a need to defend myself against highly accurate accusations of having a bad attitude. I know I should not have a bad attitude about spending time with my girlfriend. We are doing something together which is supposed to be fun. It is fun because we are together, and because we love each other, and because nobody is dying. That is what families are, and we want to be a family, and life is (propagated by) families, and we are alive. Therefore we debate the relative merits and then we hang picture frames, and therefore don't be a sourpuss about it, because this is your life and you're living it.

We also got a small dog. She is cute. She pisses and shits in the house because her body doesn’t know about “I am about to piss or shit now” because she’s only been alive for less than three months. When the dog pisses or shits in the house, you go “no no no no no no no” and you grab her and you take her outside, where she looks around and eats leaves and generally forgets why she’s alive, and she does not piss or shit any more until fifteen minutes later when you’re both back in the house. This used to upset me, but I am coming to appreciate the solitary peace and quiet I am afforded whenever I must clean piss and shit off of my floor. There are many, many worse things than being left alone to perform a task. Any task.

Some academic studies say people who have dogs experience less anxiety. I guess I believe it. The studies don’t tell you what that anxiety is replaced by, though. It’s replaced by standing around in front of your house waiting for a small dog to piss and shit. There are two times a small dog pisses and shits. "Now" and "soon." So instead of anxiety, you get mind-numbing boredom, which is relaxing in the same way as having ice water thrown in our face is invigorating. You are forced to abandon the idea of control. Where before you had options, now you are only a man, standing, attached to a small fluffy animal by a pink leash, longing with all of your heart to hold its feces in your hand, and you have no choice, because that's what you are and that's what you're doing, and you can only control your own feces.

The upshot of this lifestyle is you find yourself more patient than you’d think possible as you are summoned into the next room to examine the pros and cons of plum versus gray curtains. A curtain decision is not a task. It is your life, unfolding. It is the passage of time. This is not “We must decide on the curtains in order to have decided on the curtains.” Because if so, you will be trapped doing this and everything else like it forever. It will never end. No, these are not tasks. They are only fragments of time passing between "now" and "soon." Now I’m doing this. Soon I will do something else. For instance scratching an itch in my butt crack, or fixing the hinge on a cabinet.

I am in transition between regarding everything I don’t immediately want to do as unpleasant, or “work,” and accepting it as “life,” and as such trying to be as pleasant as possible about it. Life is precious and short, and even staring dead-eyed into Cliff From Home Depot’s face as he repeatedly uses the phrase “counter-anchor” to describe a thing you need to do to the fucking shelf that your fucking girlfriend wants you to put up, even THAT is a thing you get to experience which you would not get to experience if you were, say, lichen. Plus if you get cash back from the self-checkout you can get a Home Depot Chicago-style hot dog, which is like a sodium orgasm for your mouth. So it’s not all bad, guy. You’re okay.

My point is this: I want to watch football. My God, that would just be magnificent. I want to sit and eat a whole bag of chips, and I want to watch large and strong and young and fast men collide with each other arbitrarily. I would like very much for that to be the thing which I am doing. When the men finally start doing that again, I think I'll set aside a little time for that. That's how much I'm looking forward to it.

Before my life took its current shape, I was worried about the implications of enjoying a sport wherein the players routinely damage each others’ brains. Now I understand on a more practical level that there are a lot of ways for a brain to degrade, and not all of them are entertaining. As much as I am trying to experience and enjoy everything else that’s happening in my life, I would also dearly love to sit unmolested and watch several entire minutes of guys trying to kill each other while advancing a weird brown thing because that's what THEY are doing because that's what THEY are good at, and because watching them is a thing in my life I can choose to do.

Football is pointless and stupid, but at the end of the game one of the teams wins, and you get to go "yaaaay!," and sometimes in the middle somebody runs and jumps and catches a ball in a way that is perfect, or somebody savagely rams into another person in a way that is also, savagely, perfect, or maybe somebody's pants fall down or they have a booger, and everything is okay because it's just a game, even though it's not really, and if everybody on the field ends up in agony for the rest of their life, okay, that is horrible, but sometimes the rest of us are in agony too. It's hard to be alive, even when life is at its easiest and fullest. That's what makes it worth it.