A Minute-By-Minute Breakdown of Not Watching “Breaking Bad” 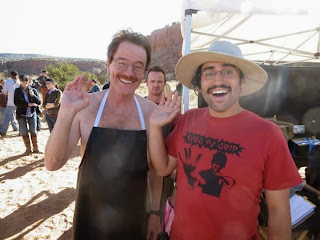 Have you guys heard of this show “Breaking Bad?” I got as far as the first couple of episodes of season 4 and then decided to stop because it made me more anxious than captivated, and because I am the master of my own free time, and because while I’d like to consider myself a willing and enthusiastic patron of the arts who does not shrink from engaging “challenging” work, it’s a fucking TV show on the fucking AMC network. The Andy Warhol film “Empire” consists of a single static shot of the Empire State Building for 8 hours and five minutes, and is said to be patently unwatchable. I would rather sit through an entire screening of “Empire” than all 62 hour-long, tension-filled episodes of “Breaking Bad.” I don’t care if it “gets really good.” My time is my own to do with what I please. I don’t work for TV shows. TV shows work for me.

So I didn’t watch the finale last night, and I’m not sure I will later. My girlfriend doesn’t want to watch the show at all. It bothers her and makes her life worse. She doesn’t like watching anything that she calls “bad topics” right before bed. I am on board with this decision. Sometimes when she has nightmares, she punches me in her sleep. I deserve to be punched in my sleep a million times over, but I can avoid forcing her to watch something she calls “Breaking Bad Topics” if it makes me more likely to avoid a subconscious haymaker.

Anyhow, here’s my reaction to the last show, broken up minute by minute for no reason:

8:00pm CDT:
When you’re paining interior surfaces, it’s all about prep work. The best thing you can do to make sure your paint applies evenly is to wash the surfaces using tri-sodium phosphate (TSP). Then apply tape and dropcloths, and take the time to do a nice, thorough job of making sure the edges are set and fully adhered. Splurge on a higher-end edging tool and nice rollers. The dinky ones will cause you to take too long to correct your inevitable mistakes, and the goal here is to prep slow and paint fast. For paint I recommend getting a paint plus primer for a more even coat, but it doesn’t really matter where you get it from. Make sure you have an oopsie rag handy, dampened with warm water, before you even crack open that first can. I go: first coat with a roller, then edges, then second coat with the roller, then touch-ups, then a third coat if necessary or if there's enough paint. You want to remove the tape while the paint is still a little wet, so the edges don’t peel. This is what I did to my living room yesterday instead of watching “Breaking Bad.”

8:12pm CDT:
Mr. Kravitz was my high school chemistry teacher, and he was great. Chemistry teachers I think are required to be a little eccentric. He had a very Woody Allen cadence when he talked, and threw puns out like candy. One time in class he and I got on a run, trading chemistry puns back and forth, like seven or eight in a row, and he finally got mad at me and ended it once I said something about “the family Joules.” He was the Cantor at his synagogue and collected Beatles records and was the first to tell me about the butcher cover. His lifelong dream was to be on Jeopardy, which he finally realized, but lost in Final because the category was “Fashion Designers” and he was a weird twitchy chemistry-teaching Beatles-collecting semi-orthodox Jew in short sleeves and a tie who compulsively played with his belly button all day long. He was out of his depth with Fashion Designers. Poor guy.

8:23pm CDT:
Maybe I should rewatch The Life Aquatic, because now that I think about it, it’s probably a very meta film about filmmaking wherein the rag tag group of stylish, Goddard-obsessed idiots goes out on a quixotic quest to make a doomed film for ludicrous personal reasons, and if I watch it that way I might not hate it. Wes Anderson is the Godfather of Nu-Twee and the reason everything is cute all the time now and we can’t buy auto insurance without emptying a bucket of glockenspiels over our heads. But that’s not his fault. At least he made my records worth three times what I paid for them by rebranding them as a must-have of vintage lifestyle-based interior decoration.

8:36pm CDT:
I am getting better at knowing when my dog is about to shit. The trick is to always watch her butthole, and if a little brown dot shows up, it’s go time. Otherwise she is trying to trick you into allowing her to eat rabbit poop. If she's shitting, you get a brown dot and she will walk fast with her nose down, and she will skim along the curb back and forth, back and forth. It is crucial to avoid distractions during this, because she will suck that thing back up in there for another 45 minutes if she sees a squirrel.

8:41pm CDT:
It’s a real pain in the ass to have Matt Ryan as my fantasy football quarterback knowing that my cousin Cal from Georgia is getting all excited whenever he does something. Cal’s Facebook is infuriating. It’s all this Atlanta fan stuff, and it is obnoxious. He’s much funnier when he’s complaining about something like The Grammys or the Miss America pageant. Cal is all about Facebook complaints. It’s the kind of stream of consciousness where you think of a thing you don’t like about something you’re watching voluntarily and your first impulse is to go on Facebook and grouse about it as if you’ve always been an expert in the subject, like “I hate it in beauty pageants when…” I usually find this hilarious, but with the sports stuff it bothers me because I write about sports in a newspaper and I'm justifiably, because I don't ever know what I'm talking about, scared that I sound like Cal. His latest missive, this morning, is on the disloyalty of Falcons fans leaving the game early even though the team almost came back. As if he’s the biggest Falcons fan in the world. As if being the biggest Falcons fan in the world is a good thing. Atlanta’s teams are pretty good recently, and Cal is a sore everything, so the winning is the worst. They are not winning this one, though. I don't care if I "hate" the Patriots or their fans. I care that when they play, I will probably be watching well-played, interesting football without an excess of goofiness. I'm glad for that.

8:52pm CDT:
I called my brother to send my birthday wishes on to his two year old daughter. He sounds like a zombie for the first 15 minutes of our conversation. Like when you wake somebody up and talk to them and they’re not stringing thoughts together or using actual words. He is speaking in this way to describe his day, which I had not asked him to do, but which he is doing out of a weary unconscious sense of duty. Let’s see, I gotta pack up the minivan for the ride home, and I gotta describe my day and narrate what I’m doing to my brother. I can’t make any sense of what he’s saying. I think he’s happy, though. His daughter is adorable. I bought her a copy of my favorite book of all time, with a very nice inscription because I'm trying to be more outwardly sweet. My Mom pointed out that I misspelled “neice” in it because that’s what my Mom does.

8:57pm CDT:
The people who’d insist that “Breaking Bad” is literature and therefore important might say that it’s a character study for the ages. We are witnessing Walt’s becoming, and it is terrifying and oddly inspiring. Real becomings are slow and boring and subtle. Real becomings are quiet, and inspiring only when time is taken to look around and have no clue how you got here or why, and you know only that you are fine, for once, with where you are and where you’re going, and you’ve accepted your limitations. When this dog shits I am going to take her back inside and pour some water in her bowl and make myself a Crystal Light and then brush my teeth. Maybe I will eat a cookie and then have to go back and brush my teeth again.

@itisbenjo
Posted by Ben Johnson at 10:43 AM