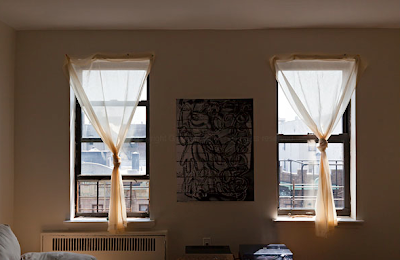 Thomas can't remember ever having been so happy.

"I can't remember ever having been this happy," he says while staring at his reflection in the small square of mirror hanging over the bathroom sink in his apartment.

He's just splashed water in his face to refresh himself because he's been up for a few hours, working at his desk, but he doesn't quite have the energy to shower just yet. The water runs down his face, past his neck, and dampens the upper half of his t-shirt. There's a drop of water on his left eyebrow, and a drop on the tip of his nose. He leaves them there. As the drops start to dry, they make the skin underneath them itch a bit.

He thinks about how being happy is so much more complicated than being sad, or being upset, or being hungry, or wanting to sleep soon. Most feelings have a cause and effect of sorts. You have one, and then you do something about it. When you're happy, you're just happy. He guesses that there's a certain level of maintenance that comes into play though, and he thinks about that.

"There's a certain level of maintenance that comes into play when you're happy, " he says out loud to the empty room. "When you recognize that you're happy, I suppose it's important to figure out why, and then try to make a list or something of how you can keep things that way. It would be a horrible thing to be happy, and then just let that sit there, and maybe it ends up evaporating."

Thomas reminds himself, daily, of how he's happy by taking himself on a tour of his own apartment. Looking at the things he has in his home, actively, seems like a good thing to do.

"Here is my stove," Thomas tells himself. "This is where I make toast for breakfast, and melt butter on it. And here's my couch, and my TV, and my bed."

Thomas has two windows in his apartment and he stands in front of one and looks at the tree outside of it, and then he stands in front of the other and looks at the red brick building across the street with the stone cross on top. The window is open just a crack and a cold autumn breeze comes in and causes his stomach, right at the belt, to be colder than the rest of his body. He opens the window all of the way so the breeze hits his face. He opens his eyes into the breeze and looks at the stone cross on the building again.

"I wish that once a year there was a thing where everyone opened the doors of their apartments and let the other people in the other apartments on their street come in for a tour," he says out loud to the window, causing a person passing by below on the sidewalk to look up and crinkle his brow. "I'd really like to see what other people had in their apartments. I wonder if they wonder about mine."

Thomas closes out his tour of his apartment by standing in front of his bookcase and picking up random books. He thinks about how people feel like they have to own books, or that it's good to own books, but how after they read them, they never really handle them much again. They just sit on the shelf. He takes out a dusty looking book he hasn't touched in a long while and opens it up. He presses two random pages to his face and takes a deep breath. He thinks that the smell of old paper is one of the best smells in the world.

"I think that the smell of old paper is one of the best smells in the world," Thomas says into the pages.

After a short while, Thomas' girlfriend comes home. Her name is Claire and they share the apartment together. Claire does not have red hair. I know it seems like she should at this point, but she doesn't. It's brown.

"How was your day?" Claire asks.

"It was good." Thomas says.

Thomas and Claire stare at each other while standing in the space between the kitchen and the living room. Thomas smiles into Claire's eyes and knows that he's staring for longer than he should. She's going to say "what?" soon.

Thomas tries to think of something else to say, but sometimes there isn't anything. Sometimes when you're happy there's not much to say about it. You're just happy. He realizes that the go-to in most conversations is to complain about something, but he doesn't have anything to complain about. He hopes this doesn't make him seem boring. He thinks of something to say.

Claire thinks about this.

"I mean, yeah, I work full time at a store so I pretty much move my body all day. Do you?"

Thomas does not feel like he moves his body enough throughout the day. He wants to move it more.

"I don't feel like I move my body enough throughout the day, and I want to move it more," he says to Claire.

Claire says something about how he should take breaks in the middle of his workdays at home to go for a walk in the park. He'd like to do this, but sometimes he feels strange when he's outside, like the tips of his fingers go numb and he's forgotten how to walk in a normal way. He feels like people look at him and recognize him as the sort of person who is not all that used to just walking around outside.

Thomas has an idea.

"Claire, I have an idea. Would you do something for me?"

Claire says that she would.

Thomas asks Claire if she would, not too hard, but not too soft either, ball up her hand into a fist and punch him in the nose.

"Why do you want me to punch you in the nose?" Claire asks.

Thomas says that it's because he'd like to give his body a jolt. Not like a drug jolt, or a temperature jolt, or a fear type of jolt, but like stirring cream into a cup of hot coffee, or blending a banana into a blender full of ice cream. Like that. He realizes that he's not describing it well.

Claire rolls her eyes and walks over to Thomas. She pauses when she gets less than a foot in front of him and arches her eyebrow as if to ask "are you sure?"

"Are you sure?" Claire asks.

"Do you want to close your eyes or something?" Claire asks.

Thomas stands there with his eyes closed and he hears Claire's feet shuffle towards him on the hard wood floor. She punches him. Sort of harder than he expected. There's a flash of white light behind his eyes and they well up. He keeps them shut. His body feels warm, starting in his stomach, and then moving up his sides and around to the back of his neck. He feels like how a person would feel after they just swam in a pool for a few hours. He opens his eyes.

"How did that feel?" Claire asks.

"It felt like you punched me in the nose," Thomas says.

Claire thinks that Thomas is being weird.

"You're being weird," Claire says.

Claire goes to the bathroom to wash her face and get comfortable for the rest of the night and Thomas goes back to the window. The right one. The one facing the stone cross. There's someone standing in the window beneath the red cross looking over at Thomas. He notices Thomas notice and looks away quickly. Thomas keeps looking, and the person who was looking at him looks back.

Thomas smiles with all of his teeth at the person in the window. He waves.

The person in the window waves back.

@WolfieVibes
Posted by Unknown at 12:44 PM