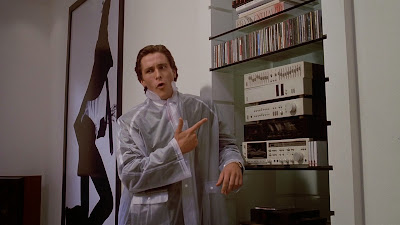 Of course that scenario is totally unrealistic. That’s what I love about movie serial killers. There are very few real life serial killers who are as theatrical as their movie counterparts. Real serial killers probably aren’t as much fun because they’re actually killing people and mutilating their bodies and whatever it is they’re doing, and if one got you it would probably be more of an “oh shit, this crazy person is going to kill me and mutilate my body” rather than “oh MAN I did not see that human skull codpiece coming, ha ha ha” situation. Like you probably wouldn’t roll your eyes or high five your friends if a real guy was about to kill you and did something weirdly hyperspecific first.

Serial killer movies always have that one “okay, this guy is NUTS” moment where the director or the screenwriter has to show you that this person does not experience any reliable version of reality, and therefore the plot can proceed with more willfully suspended disbelief. Usually this is a chance for a character actor to shine, and the movie to become genuinely unsettling. Think “I’d fuck me” in The Silence of the Lambs. If the actor goes too over the top and doesn’t pull it off believably, it’s still great. The “okay, this guy is NUTS” scene is pretty win-win.

But there’s also a lot of “there’s something wrong with this guy” stage dressing leading up to the “okay, this guy is NUTS” scene. And those are the little details like “hey just FYI, this guy who works at Pet Supplies Plus just so happens to have intentionally long fingernails.”

This is usually the portion of the proceedings in a serial killer movie where music comes into play. The serial killer is listening to something implausible, like “Waterloo” by Abba, and loving it. Later he will sing it slowly and off key to really emphasize the creepiness inherent in the “I couldn’t leave you if I wanted to” chorus. But for now you only know there’s something off about this guy because he’s a full grown man who’s really excited about Abba’s third to fifth best song (depending on how you feel about “Mamma Mia” and “Chiquitita”). “Waterloo” is not a great song unless you’re trying your best to indicate that somebody is a lunatic serial killer, in which case it is PERFECT.

I love Potential Movie Serial Killer Jams. It might be my favorite genre of music.

In fact, fuck it, here’s a mixtape of Potential Movie Serial Killer Jams along with their recommended uses in a serial killer movie.

Recommended Use: Maybe a serial killer is a DJ at a roller rink (an underrated creepy guy profession) who goes after young girls, and he plays this song whenever he spots his quarry.  I’m envisioning a girl-from-next-door type whose parents are getting a divorce because one of them is Michael Douglas, and every Michael Douglas movie ever is about not fucking somebody you shouldn’t fuck. So this roller rink DJ serial killer lures the daughter into doing the one thing she swore she wouldn’t do, leave her slightly sluttier best friend behind, which she only does in rebellion against Michael Douglas, whose credibility as a father and authority figure is destroyed because he couldn’t help but have an affair with Gina Gershon. I don’t know. I’m just spitballin’ here.

Recommended Use: A huge bonus of the Potential Movie Serial Killer Jam genre is its ability to change the context of a song you dislike. It’s like how the spray nozzles at the grocery store produce aisle play “Singin’ In The Rain” and you think of A Clockwork Orange, and that horrible imagery is brought to you by a huge profit-driven avaricious multinational grocery store chain company which misfired while outwardly trying to be cutely innocent, and that’s a kind of funny situation. Please enjoy our fresh produce; also, FYI, you are now thinking of murderers and rapists from a dystopian future. Anyhow, I wish somebody would similarly ruin “Wonderful Tonight.” A guy should play it while applying makeup to the corpse of his dead mother. Duh.

“Puttin’ On The Ritz” by Taco

Recommended Use: This one actually got used in The Call starring Halle Berry, but it was so perfect it warrants mention. If some heretofore faceless guy grabs you and chloroforms you and puts you in a trunk, and he can’t hear your titular 911 cell phone call to Halle Berry because he’s listening to “Puttin’ on the Ritz” too loud, you definitely do not want to go wherever he is taking you. You probably wouldn’t want to anyway, but overloud “Puttin’ on the Ritz” is a DEFINITE dealbreaker.

Recommended Use: This one is so exacting in its creepiness it could be the title of the whole movie. You might be more familiar with the disappointingly-inappropriate-for-fictional-serial-killers Marvin Gaye/Tammi Terrell version, but if you’re looking to indicate “this person is a crazy,” you’ve got to go with the original. You could even make use of the act’s weird last name. “Purify.” That sounds like the main thesis of an “okay, this guy is NUTS” monologue, possibly while listening to this song in a car, where in the penultimate scene the deranged puppeteer killer descends into the depths of the lake as his Chevy Malibu slowly floods while still playing this song. Puppets, and by extension people who enjoy puppets, give me the willies.

Recommended Use: The most secretly disturbing thing about Buffalo Bill in The Silence of the Lambs is how good the music was that he listened to. Here’s a guy living in Shit Town, Ohio in 1990 and he’s in his darkened basement grooving out to Extricate-era Fall, trying his best to get his own darkly particular brand of totally unacceptable kicks. Minus the whole murders and skin suit thing, that’s roughly akin to what I’d probably be doing in the same situation. The updated version would include something overtly creeptastic but hip-sounding like Indian Jewelry. “Look Alive” could also be your title.

Recommended Use: I just want this song to go away. “Yaaaah. Ya ya ya yah YAHHH.” That’s the serial killer’s favorite part. Just it’s a guy and he does something awful and it’s that part of “Crocodile Rock,” okay? Maybe he wants to be a crocodile because his dad was The Crocodile Hunter or something. You figure it out. I can’t come up with every brilliant idea in the world, people.

“Wake Up Little Susie” by The Everly Brothers

Recommended Use: When you work in a record store one of your favorite time-killing moves is to play records on the wrong speed. This innocent little ditty about falling asleep in a movie theater and blowing curfew and being afraid of the resultant scandal becomes a haunting murder ballad when you play the 45 at 33rpm. So I’m picturing a record playing and slowing down and warping while a house is on fire. Maybe the guy has a dead sister named Susie who died of smoke inhalation if you want to go on the nose with it.

“Come A Little Bit Closer” by Jay & The Americans

Recommended Use: I’m just going to close on this one because if you do this for too long you start to get real buggy and it’s not fun. Most Potential Movie Serial Killer Jams are songs you would not want to listen to repeatedly unless you were a character in a movie where the subtext is “ALERT ALERT: THIS PERSON IS NOT OKAY.” It’s hard to delve into that line of thought for prolonged stretches. But daydreams of horrific cinematic scenarios can help you get through something as shitty as “Come A Little Bit Closer” if you don’t have a choice but to sit there in the waiting area of Jiffy Lube and listen to it. That’s why we’re here. “So big and so strong” is a no-brainer of a potential serial killer lyric. Serial killers with God complexes love it when you tell them to come a little bit closer because they’re so big and so strong, especially if they have some thyroid issue that makes them super skinny and they always use a taser on their victims. I mean, I think. I don’t know.
Anyhow, that’s the Potential Movie Serial Killer Mixtape. Enjoy it, add to it mentally by accident as a form of self-defense when some shitty song comes on the radio, and Happy Halloween.