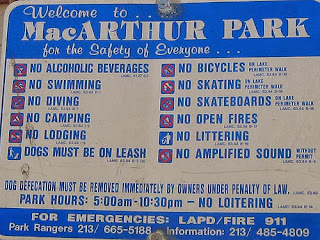 Named after General Douglas MacArthur, MacArthur Park is a public park in the neighborhood of Westlake on the outskirts of Downtown Los Angeles, just south of the popular hipster neighborhood Echo Park. I lived a few blocks from MacArthur Park in Westlake for two and a half years, and I just moved back. Despite being surrounded by palm trees, boasting a placid, artificial lake equipped with live fish, and displaying a host of monuments, murals and sculptures, since the 1980’s and 90’s MacArthur Park and Westlake have become notorious.

As with many LA neighborhoods in the 90’s, it was known that you just simply didn’t go there. From what I can gather, the Park has changed considerably since it was a haven for prostitution, gambling, drug dealing, Fake ID production, crack smoking and heroin use. All regularly traded out in the open. Gangs shot at each other. People were stabbed all the time. It got raw. It was no good. If you’re one of the 17 people that saw the rock documentary “Hit So Hard” featuring the story of Hole drummer Patty Schemel, she bottoms out in MacArthur Park, selling her body for heroin. MacArthur Park is where all of the horrible shit happens in the movie “Training Day.” MacArthur Park is where Carlton almost lost himself.

There’s still plenty of sketchy things going down in the park, but I get the impression it’s relaxed a lot since its heyday in the 90’s. Jon Stewart held his “Rally to Restore Sanity” Los Angeles appearance at the Park. The mayor has made efforts to clean it up. It seems to have come a long way. I wasn’t aware of its history when I moved in, but when I was thinking of moving back to Westlake I decided to look up the actual Park itself on Yelp and see what some of the reviewers had to say about it. Yelp did not disappoint. I also checked Google reviews.  I wrote down some of my all time favorites and have compiled a list of the very best from different people for your enjoyment. These are all taken as is, typos included. All reviews are from Yelp unless otherwise noted. 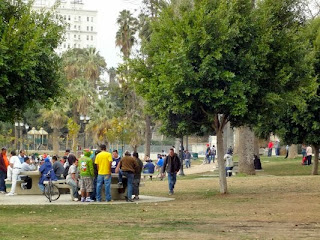 “Imagine a kindergarden naptime if kindergarden was made up of junkies whose average real age is 120 years old.“
-Marie M.

“I hope you aren’t afraid of homeless people and the smell of urine.”
-Chanel C.

“This is a great place to hang out if you’re homeless.”
-Amy F.

“The first time I ever heard of MacArthur Park was from the ‘Fresh Prince’ episode ‘72 hours’ which in case you forgot Will Smith dares Carlton to survive in the ‘hood’ for 72 hours.  However, to Will’s surprise, Carlton transforms to ‘C-Note’ and plans on selling Gucci Bags in MacArthur Park.”
-Justin Y.

“There really is no reason to ever set foot here unless you are clinically insane.”
-J.P. A.

“I don’t even want to begin to imagine what goes on here at night.”
-Steven L.

“MacArthur Park made me want to run screaming back to my own gang infested East Side hood.”
-Carmen P.

“I can tell you I got more catcalls and wolf whistles and creepy MJ-style self-groping than I have in all my years in LA combined, multiplied by twenty.”
-Carmen P.

“This place was just so dirty.”
-Michelle L.

“This place is gross, the FBI should investigate.”
-A Google User (Anonymous)

“When they drained the lake in the early 90’s my teacher told me they pulled over 90 dead bodies out.”
-Smurf S.

“Things I’ve seen:  Close range gun fights, cars constantly filled with crack smoke, homeless shopping cart races, people pulling parking meters out of the ground and pounding them into the sidewalk at 3am to get the change, mostly just tons of drug addicts desperately scamming for money.  This is the hood where a guy killed his neighbor and carried his head around in a box for weeks and where homeless people get set on fire.”
-Smurf S.

“Drugs are everywhere and so are the police.”
-Tishawn F.

“Can’t count how many times I’ve been propositioned to make money through having sex with someone.”
-Tishawn F.

“Need to purchase an identity?  Need to inhale urine odors?  Need to constantly look over your shoulder?  If you answered yes to any of these, then this is the place for you.”
-Susan H.

“I got my fake ID here.  I got my social security card here.  This park is for those who are serious about being in this country illegally.”
-Jacqueline C.

“If I could give it zero stars I would.”
-A Google User (Anonymous)

“I once saw a man bathing in the drinking fountain.”
- A Google User (Anonymous)

Holy shit!  That was definitely raw. Guess what though, I love it. I’m in love with it. It’s real. It’s a real place. Mostly it’s relaxed and calm. This is going to be one of the hippest neighborhoods in LA in five to ten years. I’m glad to be here now. 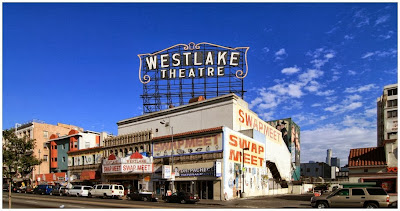 Anywhere there’s poverty or people struggling to make ends meet there’s going to be a healthy art scene, and Westlake is no exception. Cool bars. Actual hipster girls who have real jobs. Music venues. A basketball court. Pho Noodles. A phenomenal deli. Art venues. Bizarro store front churches with neon Jesuses. Tamale salesmen. Downtown LA right next door. All of this is at your fingertips.

Yes, it gets raw on certain streets. But here’s the deal...you live in a giant city. You’ve gone out of your way to take all of your belongings and live in a city with millions and millions of people and not all of them are going to be good but that’s okay because that’s what life is about and you’re not going to live in Appleton, Wisconsin. You’ve made this decision so now you’re obligated to have weird stuff happen to you and you should see strange and unpleasant things. People who do not actually like living in cities will not like this place. Guaranteed. It’s beautiful.

One of the only people I met who had heard of the neighborhood when I first moved there and loved it was this middle aged gay wardrobe dude from a commercial I did years ago. He saw Nirvana there in the 90’s. He was also wearing the greatest sweatshirt I have ever seen, which was a series of doves flying around the embroidered words “Don’t Yell At Me.”

Outside of hearing one shooting from my roof, the freakiest thing that ever happened to me in the Park was when I was walking down Alvarado St. and there was a crazed street preacher screaming on the corner about Jesus and waving the Bible. Draped around his shoulders was a massive, albino python with flaming red eyes and it was real. That was pretty crazy, but I’m not sorry I saw it.

I live in a great neighborhood. It’s a real neighborhood filled with real people who are trying really hard to live honestly in a very strange place. In a town filled with people constantly feeling the need to project an unnatural amount of confidence and success, it’s truly refreshing place to be. It takes a very special girl to spend an evening here, but once she does, you know she is down for life.

The market next to me was prominently featured in the movie “Drive.” I asked one of the employees there if they knew about it and they simply shrugged and said “Yes” and went about their business. It was fantastic.

I couldn’t resist the Park’s siren song and neither should you. I’m proud to live here, and I’ll do the best I can to help it keep improving.