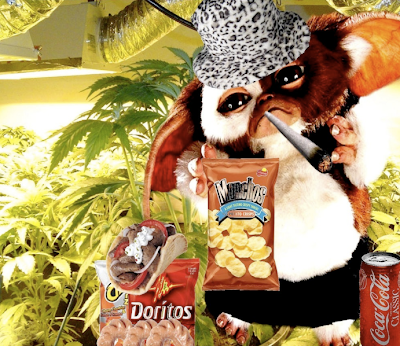 Last night, I was laying on the couch with my girlfriend finishing up a new episode of Bar Rescue...because Tuesday. I was really looking forward to the episode of Tony Bourdain's new show Parts Unknown that was living inside the DVR, and to Beth going to bed like she said she was going to. It's not that I didn't want to spend time together. It was more that I wanted to veg out because I'd just gotten home from smoking bowls with my friend Droopy.

Droops is an ex-gangster sociopath in the most adorable way possible. He's a good dude, hilarious, but you do NOT want him angered.

Last year, my other ex-roommate, a DJ named Troma, and I snuck into Droopy's bedroom when we all lived together in a band house that had become known as the Isle of Tortuga. Droopy had crashed and Troma and I, coked out of our minds, attempted to steal a cigarette because we were jonesing and when you're high on coke there is nothing worse than not having a cigarette. And there was no way either of us were going to attempt a trip to the store, in public, and have to interact during what would normally have been a simple business transaction, but was sure to be the most nerve-wracking quest of our lives. I wasn't going to jail for a cigarette. Instead we decided taking one from Droopy was a good idea.

This was not a good idea.

Droopy likes to have a smoke when he wakes up. Like immediately. Often only in his boxers, loose wife-beater, and with eyes full of boogers. He believed we had taken the liberty of lifting his last smoke thus depriving him of his morning ritual. We had not, merely taking the mostly-full pack in a snatch and grab tactic which at the time seemed better than the ruffling through pockets in the dark method.

Neither would have been a particularly good method.

Even though his pack was sitting right there on the coffee table, he bounded up all wide-eyed, and mostly drunk, scared the living shit out of us in our already frayed state, and stormed out at 2 AM. He screeched off in his car as it echoed off the hillsides of Northeast Los Angeles. Troma and I huddled together, shared the cigarette, and feared for our lives. After we put out the smoke, we went our separate ways. I remember locking my door. I don't know what I thought I was in danger of, but the paranoia made me caress that little mechanism on the doorknob ninety degrees and creep into bed pulling the covers up to my nose.

I laid awake for most of the night. I listened as Droopy's little car's distinctive tinny whine made it's way up the street again. I scooched down, burying myself into my futon even deeper as he stomped through the pad and back into his room and again a quiet descended on the Isle. Except that I couldn't stop wiggling my toes.

So, last night Beth ended up going to bed after all and I settled in a catatonic state of tingly relaxation. Anthony Bourdain's new show on CNN had hooked me with the Koreatown episode where John Cho takes him to Sizzler on Western and makes meatball tacos. What I'm trying to say is, I like alone time. I do NOT like being alone. I feel lonely a lot. I even feel lonely sometimes when I'm in the company of a whole bunch of people. Shit we all do, don't we? But I cherish alone time, need it. It sustains me. I can write. I can masturbate. "Here in my van, I can do what I want." - The Descendents.

I can apparently also eat. Because of the weed, and Bourdain's Sicilian food antics, what I got the urge to do was quench my munchies. I've been pretty broke lately, and by lately I mean I've never not been broke, so there aren't a lot of snacks around my house. If drunk and pressed hard enough I might admit to making a Frank's Red Hot and parmesan cheese tortilla roll up the other day. But fortunately there was some left over black bean soup in a tupperware container with my stoned name all over it!

A word about this soup: It was made by Beth. It was delicious. And it had me and her and my friend Angel, who I call the DJOTC (DJ on the Couch), farting like a yoga parody video. It got so bad we weren't even hiding it anymore. It just became something we all were doing, unselfconsciously, naturally right in front of each other. It was like being on a nude beach somewhere with normal looking people all comfortable in our skins, accepting of our flaws. Kurt Vonnegut wrote in Galapagos, "If a bunch of them are lying around on the a beach…and one of them farts, everybody else laughs and laughs, just as people would have done a million years ago." It was kind of refreshing.

So, as I ladelled in spoonful after spoonful of this delicious, gas-inducing black gold into my cottonmouth, Beth popped back out of the bedroom, catching me mid-faceful of a munchie binge, and surprising the hell out of me. I'm pretty sure it even made me squeeze off a little toot.

She was trying to show me some Reddit post she thought was funny, and pretended not to be completely disgusted with me. I appreciated it and made some excuse about not having eaten  lunch.

In one last confirmation of the next day's schedule before bed, I reminded her that my kids were going to be staying with us the following night. I also admitted that I'd be going to the gym, partially a half-assed attempt at making up for the soup shoveling. I also, in one of my fits of awful, self-deprecating honesty, admitted that I like to go to the gym on days when I have my kids, so that I can take advantage of an extra hour or so of childcare.

As a father, it made me feel a little bit like Louis C.K. but Beth reminded me that Louis C.K. is the guy who paid his babysitter to come over and then tried to send her home because, as a single, middle-aged dad, he had nowhere to go.

I shrugged, but just kept on eating soup.