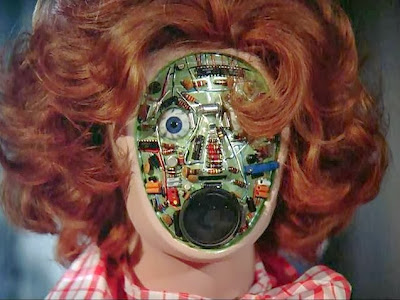 One of the facts of life we are learning in the “social media age” is that everybody alive has had the opportunity to run into and tolerate the existence of at least one complete nutbag.  Facebook nutbags are the spice of life, aren’t they? I have some very special nutbags of my own, and I cherish their every irritating nutbag blurt.

There is a movement underway to stigmatize Facebook nutbaggery. Why? You’re that great, you need everything to be perfect for you all the time? You don’t ever want to read anything on your Facebook feed that’s boring or worthless or one hundred percent insane? Yeah, man, like, lock me up in my little room and tell me whatever I want to hear, man. No way. I want to get out there (on the internet) and LIVE (on the internet).

I want selfies and pictures of food for no reason. I want “we took a trip to Venice and we’re posting pictures of it because we have a terrifying feeling that having been to Venice has not made us any different and we’re going to die anyway.” I want inspirational phrases in Helvetica. I want Willy Wonka deriding liberalism. Give me made up quotes attributed to the Dalai Lama which are clearly intended as yet another jab in some inextricably complicated decades-long quarrel with somebody’s bitch sister. Give me political views that are not located on any spectrum of plausible values that you “just can’t help” but express. Give me nutbags. Nutbag it up.

If I wanted to just sit around and pat myself on the back for being witty and having nothing but witty friends, I’d go back to doing improv for another decade. I shudder at the thought. I want genuine weirdos, not some insincere facsimile wherein weirdoness is employed as an alternative mating strategy by insecure people. Don’t give me the theatrical version. I want it raw and uncut. I want nutbags. People who can barely function. I want them to show me a neverending torrent of pictures which feature cats but never ever people. Let’s keep the internet strange, okay? No nutbag shaming.

I strongly encourage you, during your next round of Facebook friend culls, to delete everybody who’s not a nutbag. It will be difficult. When you think about it hard enough, posting anything ever on Facebook is a nutbag thing to do. Especially anybody who “always brings it” and/or is “good at Facebook.” You don’t want to be good at this, you guys. This is a nothing to be good at thing. It’s better to be bad at it, and check in occasionally and say “how fascinating,” and maybe post something about how you always wanted to eat a whole thing of flowers and it turns out tulips are delicious. 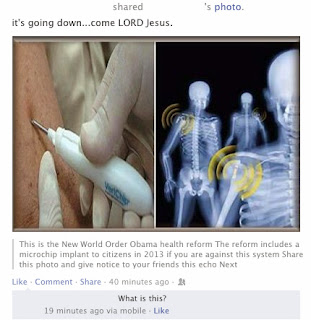 Total Bozo co-editor Kelly McClure wants me to write about a nutbag who popped up in her Facebook feed doing a nutbag thing. Specifically, some nutbag from her high school got fooled by an internet hoax about something something if you don’t like Obamacare the government will come and put a microchip in your skin, something something conspiracy. Kelly’s nutbag is against this idea, so much so that she, the nutbag, invoked UPPERCASE JESUS. You know somebody’s a believer in CHRIST OUR LORD when they UPPERCASE their JESUSes.

It’s sad that there are people who register truefactsyoushouldknow.net and then write things about Lizard People Who Want To Take Your Guns So They Can Start A New World Order, and it’s even sadder that this stirs up nutbags who get all worried about actual lizard people gun thiefs rather than the REAL problem: metaphorical lizard people gun thiefs. Don’t pick on nutbags, and especially don’t tell them the TRUTH in the form of an ALLEGORY they CAN’T UNDERSTAND. Metaphorical lizard people are ALWAYS coming for your metaphorical guns. That is a universal truth. And if you can’t be nice about it and phrase this in a way that nutbags won’t go running to UPPERCASE JESUS about, maybe YOU are the lizard person. OKAY, INTERNET?

I think Kelly wants me to talk about this whole “Obama wants to inject microchips into dissenters” thing. Without having studied the relevant facts, because there aren’t any, I’m for it. Just chipping people in general is good. It’s like that thing where you can’t steal an iPhone anymore because it has GPS, and eventually a couple of very exasperated police officers will come to where you are and get it back from you. The other day I saw a person on the El Train who was in the seat right by the door, in prime snatch and run position, and this person busted out a laptop and headphones like she was in a Starbucks or someplace that’s guaranteed to be safe like that. I thought she was probably an idiot, and I was initially rooting for a street teenager with a difficult home life to steal her laptop and somehow profit from it. But that thing probably had a chip in it. That’s when I learned my lesson: chips equal power. Obama putting a chip in you would is like being empowered by the BLESSED GRACE of UPPERCASE JESUS.

Sunday’s sermon: JESUS’S LOVE is GOD’S MICROCHIP that HE PUT IN YOU so he could FOLLOW YOU EVERYWHERE. Now it seems like a better idea, doesn’t it? 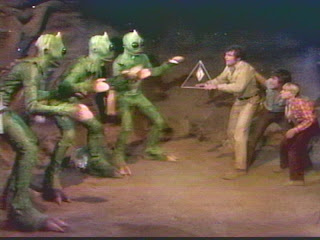 As for the whole “political dissent” thing, we’ve already learned from Congress that the most subversive thing you can possibly do at this point is nothing. People who want to be in Congress are insane metaphorical lizard people, and probably Ted Cruz with those weird dead eyes of his is an actual lizard person, and they are hellbent on destruction, and we should all just go ahead and let them have it since they want it so bad. Why go through all the trouble of bombing a federal building when you can do nothing and the government will just shut itself down for 16 days? I cannot stress this point enough: we’re all nutbags. Our elected leaders are the most megalomaniacal nutbags.

I say chip me up, United States Government. As the NSA can probably attest to already, I’ll be at my own house, pretty much not doing anything. Maybe while you’re at it you can put a chip in my girlfriend’s car keys. I might have heard them saying some very inflammatory things about how Obama is a secret Muslim, and I can’t confirm or deny that they’ve been building a creepy plastic gun in the garage. I don’t know what they do at night, and I don’t know where they are. Ever. Obviously my girlfriend’s car keys need to be monitored by the government at all times; also, sidebar, apparently it’s my fucking fault they’re lost.

But: insensate minds can disagree. If a nutbag, or non-nutbag, of which there are none, is against the idea of forced Government Microchipping of anybody who disagrees with the tenor and scope of legislation which creates collective bargaining in the health care marketplace, I can understand why they might have that opinion. Just, look out, you guys: when you forward any forced microchipping stories, even from a reputable source like something you saw on Facebook with your own two eyeballs, THAT is like a microchip of a thing that somebody in the government can trace. So it’s like are you raising awareness, or are you falling into their trap? This is an important thing to think and talk about the next time you find yourself on Facebook describing your dinner in minute detail like a deranged serial killer. OKAY, NUTBAGS?

There can be no nutbag resolution without nutbag dialogue. We need more of it.

I’m glad Kelly knows a person from her high school who, through nutbaggy interpretation of human events, thinks that the actual U.S. Government and actual Obama wants to and can afford to put an actual microchip in her skin. The truth is much more sinister: the actual political wing of the government doesn’t give a shit except insofar as they can plausibly demonstrate an adequate amount of give a shit to the people who would reelect them, and the bureaucratic wing of the government, especially the part of the government who would do things like put microchips in you and monitor the resultant data is too big to be well organized, and is full of people with redundant mandates, and they’re all only really motivated to lobby for funding for their own departments and to advance their own careers by being “the person who did the important thing,” or at least taking credit for it. In other words, the Government is made up of human beings, which is terrifying. I’d probably prefer lizards. Humans are a bunch of nutbags.