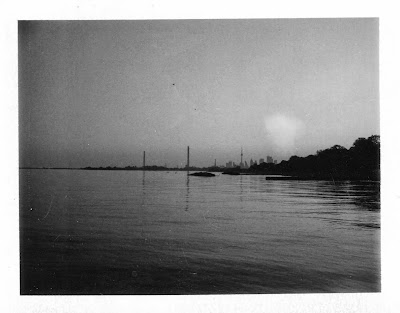 In the night, in summer, this is the season that nobody who lays native claim to this city associates with fear, with mute and passive grief, the kind that renders you useless. We mourn the night when we lose it like this, when it is taken and the scorched streets we slink around on the back of July become brack to us. We gape and stall and the size of this place closes in around us, suddenly the city shrinks a hundred miles an hour with the ways we’re all helpless having packed ourselves in this way. People will scream for a time and the pulse will shoot up, wild, fevered and righteous with moaning gain: public death makes a boom not a rattle. But we lose each other in the splintering of grief and what was a gripping magnet in it’s fury and fresh blood gives so quickly to fermented cause, to haggling the centre point so hard it splits and what stood on it’s own that quickened and shrunk the faults between us, knocked us around the head and forced our senses to narrow now shies under the collective weight of claiming a terror for your own and somewhere the smiling grin of those we’ve pressed to protect us will shift and they will take the city from us again. There is terror here. We cover our mouths with our quarrelling hands. Anger makes allies easy but ownership of grief -- grief that is huge and whole enough for everyone -- draws up corners to get pinned in for how quickly it quarters. We waste our breath talking trails and pretty soon the good air is gone and it’s all too hot to go around, heavy and wet and even the windbags can’t shove it down in their lungs. Our city, the crude slights against it, think of all the summer’s before. Last year, serial assaults and we stood dumb in the night saying hold on hold on there’s got to be someone paying attention to this. We gave you this city and it’s going from us while we huddled in the shrinking orange circle of street lamps overhead and we’d be fuming if we didn’t imagine the hurt coming into us from the dark at a full on run.

You come to this place where I live and you are surprised when the territory you've spent sparse time taking does not take to you. You are surprised at the ferocity of this city, fields and lots, asphalt to spare, there must be ghosts everywhere for you. I don't feel for you for these hauntings, they're yours, we take the things we are owed and if we don't then they take us but either way it’s earned. My range here is what's in me, long and tangled up, panting and sensing in seasonal memory what happens next and I watch you in the night with animal eyes and see you've no idea. You are surprised at the scrapes on you and how much cold air is left after everyone's stepped back. We're out here on the curb and we're out here at the north tracks and we're out here shouting downhill and the difference is the colours we run. Hot and fast and flushed they've come back to me, I hold the pulse I'd lost. There's no need to run you out, I know my territory, squared off only in the way you can stand once everything else has been taken from you. You got my gold for a while and now you will have to make your own light. You are surprised at the silence but it's when your voice stopped echoing back on itself you realized nothing had been said for a long time. You are surprised at the silence you've made hollering in a vacuum, you've got nobody else's air anymore.
There are certain people who rush you, who approach like dogs without sense. They will appear eager and open, ears at attention and legs at the ready, hackles low but bodies trembling, waiting for the signal you're about to let them run alongside you. Shoulder to shoulder, you will gain perfect pace for a time and even something that seems like support. But they will balk, they will feel your shoulder and see the way you eat up the ground and they will envy the ease of the miles and start to strain against you. Throwing their necks out, anything to gain a few inches, they will struggle and shake to the sides like a plane losing air. What first seemed a slow ease will grow violent and soon the pacer and companion is gone and you've a frothing wound-up rabid shadow snapping at your flanks and the surprise at catching this thing in your peripheral would be more if you hadn't already seen it coming.
I try to imagine you here with your stupid waterlogged senses. Staying here. There are plenty of people that stick around knowing plain they shouldn't, who’ve got no discourse with their guts. How you are dumb is a lot different. You're void of something, dumb in the stricken sense, parts of you missing, just up and gone. For a long time I wondered if they were just buried but the dig has got nothing to do with me now. You're not feral and you're not sharp and you'll find yourself on the shores of this place realizing that nothing is chasing you, that you've reworked your moral compass so many times it's spinning loose wheels right along with you. There's no reason for you to be here and you're too heart-mute to hear it. The thing about everybody else being wrong is pretty soon you run out of people to be right to.

Messages come across the screen, pop up after a T3 and writhing with cramps all day, "Hi I'm in love with you", and you allocate them alongside the scenes in the turquoise pool on the lime-neon inflatable mattress floating around with a Busch on your stomach as he clicks photos of you from the side. Photos in black and white where the pool looks on fire and white orbs of light pop up around your head like ghosts and the colour of everything is gone into gradients but somehow sharper being stripped. You can see the heat captured in the negative spaces. Out on the jetty the same thing, the water pink and silver and the dogs losing their minds up and down the beach and the Polaroids he hands you of yourself somehow your hair gone blonder in grey, one is backlit so you're a shadow and all you can see are white holes for eyes and the teeth of the tiger on your Detroit hat. Waking up in his room with the light off the pool on the ceiling the loudest noise is the little fan then the mourning doves then his breath and murmurs and in that small space everything goes the quality of prayer. Summer is waning, the light is lower, gold burdened, heavy and ripe. The sun stays put at half mast for half the day and finally rolls into the horizon red and huge as we're driving back from the country and all the cars in front of us on the 401 are disappearing into it. Weekends like this, spent on the highway between the barn and the beach and your weird cousin's pig roast make the city feel huge again. On the jetty he tells you how at home you looked hurtling through the air on the back of your horse, his head drops sideways to his shoulder and the whole city stretches up behind him, miniature and emblemized, a totem to be taken and worn at the neck.

People are refractors, prone to catch the light at certain angles, helpless til they're held the right way. What wanes with anger leaves a sheen over everything and in your body you know it to be the animal opalescence of love. We’re left with our bodies and our fear and our city and the way the summer’s thinned us, another season of light, dead and dripping at our feet.