Dig a Hole and Smell Inside - An Interview with David Lynch 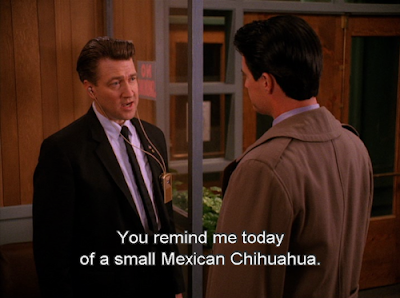 I feel like I've done nothing but talk about David Lynch for the past two weeks, and it's for a better reason than the usual one, which is the fact that I am pretty much always talking about him anyway. My current, professional reason for obsessing over him is that I recently interviewed him on the telephone for NY Post. The piece I interviewed him for was short, only 400 words, and it ran yesterday, but we talked for 18 minutes, so obviously a lot didn't make it in. When I turned in my article to the Post, my editor there asked me if he "said anything normal," and what he was like on the phone. I don't think she understood that talking to Lynch is pretty much exactly how I'd imagine talking to Gordon Cole, the character he played on Twin Peaks, would be. In other words, perfect. Here's the full interview:

TOTAL BOZO KELLY: I had a dream last night that I was interviewing you at your house, but you kept getting distracted because you couldn’t find your leave-in hair conditioner.
DAVID LYNCH: (Laughs) Well, you had a real good nightmare.

Painting, directing, and making music all have a lot to do with building one thing onto another. How does the act of building music differ the most from your other outlets?
Well, there’s similarities to it, and I guess the difference is that in cinema you utilize music, but here, it’s JUST music, and it’s a beautiful, beautiful world of music, and a beautiful medium and it’s not about pictures, it’s not about objects, it’s this fantastic world of music that you go into and start hearing things and building upon what you hear. And it’s a magical thing.

Do you find that you come at the task of making music in the same way you do when directing, or is it something that’s new and specific to just this?
I work with Dean Hurley, and Dean is, most of the time, the one who twists the knobs and raises the faders, but I’m sitting next to Dean and talking to Dean, and the way we start is we jam together, so it’s a collaborative thing, it’s two people going down the road rather than with directing the film where all the things have to pass through the filter of the director or the thing doesn’t have a chance of holding together. But music, at least the way we work, is more collaborative.

Do you ever find it hard to describe what you’re shooting for musically, in order for it to be technically carried out? Like, “I want a squank instead of a squeak.”
You could say that communication is always a problem, in all outlets where you’re working with other people, but there’s ways to communicate in non-musical ways to musicians, and what I found, working with other musicians, is that they’re abstract thinkers and they catch on to a phrase or a word, just like an actor or an actress, and they kind of love that way, as much, or more, than “Hit an E flat there.”

When you listen to music for pleasure, do you find that your mind makes movies, like little daydream movies?
Oh for sure, many many ideas, for me, have come out of music, and many many pictures. A character can come out of music, a mood, a way that things look with the light, or a location, a whole scene can flow out, all these things music can conjur, and that’s why it’s important to listen to many many different types of music. You never know what’s gonna come out. It’ll really really help you.

One of my favorite things to do is to listen to music with headphones on and stare out the window, and just really let my mind go and that got me to think about what that must possibly be like for you.
I don’t listen on headphones, I like to listen on some good speakers, but it’s the same thing. Headphones to me, I think it’s great, but then I worry about what I’m not hearing in the house, or where I am. Like some distant scream, or some object falling, or something like this.

Your songs, similar to your movies, are kind of scary, but in this wonderful way where you don’t really know why, and I think that it has something to do with suspense. How do you feel about suspense as a creative tool?
You said this word suspense, and another way to think about it is this business of leaning forward in the chair, being pulled into another world, or being pulled forward. I think in the feature film world this business of holding an audience for two hours or three hours is a very very tricky business. In making a feature film, this is a huge problem if they fall out of the world, and so this business of being pulled forward, you could say it’s like suspense, but it’s kinda pulling forward, always pulling forward, and this is a critical thing to feel while you’re working, you don’t have to name it or anything, but it’s a thing that’s at work, in different mediums.

There’s something about the feel of the things you create that’s lasting. It stays with you.  I remember seeing Lost Highway in the movie theater by myself and on my way home I had to pull over to the side of the road and wait until I felt normal enough to drive again.
This is a very interesting thing and I’ve heard stories like this. A guy left Lost Highway and he was driving home and he went through a red light and stopped at a green light.

When you’re coming up to a new musical project, do you feel like you want to keep yourself from listening to other kinds of music so that you’re pulling entirely from within?
I can listen to tons of music, but when it comes time to making music, it doesn’t have anything to do with what’s outside. You can have inspiration, and you can say that you love this and this and this, but when we’re making it, it’s just that sound, and that beat, and that feel that’s driving the boat. And that’s the beauty of it, it’s sort of got a feel that’s brand new, and coming from what we’re generating.

Is there any specific song on this album that you heard differently in your head from what became the finished product?
All of them. In a film, you catch these ideas and organize these ideas into a script, so the ideas get translated into words, and then those words and ideas get translated into cinema. In music, there’s nothing written out where you say “we’re gonna do this,” it’s all based on experimentation. So there’s no feeling that “this is much better than I thought it would be.” It’s not that kinda thing.

Why did you choose that particular Bob Dylan song to cover? I know you’ve mentioned that it’s a cover of a cover, but why that particular song?
Dean Hurley had the idea that we should do that song, so we did it. He wrote out the lyrics, and then I sang them, and Dean made me sound good.

You gesticulate a lot when you speak, and I’ve heard mention that you like to do physical things like chopping wood. Do you feel that working the body has something to do with working the mind, or does it come more from a place of nervous energy?
I don’t know what it is, but when I speak, my hands move. And they just always have done that, I don’t know exactly what it is, but they need to move a certain way for certain words and certain ideas. I don’t know why. But if I had to have them handcuffed behind my back, I would feel like I’m not communicating properly.

Do you feel like you’re a nervous person?
I hate speaking in public, but I do it because I’m glad I heard about meditation and TM and so I don’t mind telling people about it, but I don’t really feel comfortable walking out and getting started, I really don’t like it. And that feeling afterwards, if people have gotten something, then I feel really good.

I read an article online where you mentioned that going out to eat is a nightmare, but I wasn’t able to read on without having to pay, so I was wondering what your reason was.
I don’t really like to go out of my house, it’s sort of the same way as speaking in public. I feel strange out and about amongst the people. But if it’s really good food it’s okay.

When I think of you, and your work, I always think of fall, and fall is my all-time favorite smell. What’s your favorite smell?
I like to dig a hole and smell the earth. But not all earth smells the same, so really I think a great memory is digging holes in Spokane, Washington, or digging holes in Boise, Idaho. The earth just smells so good in those two places.

David Lynch's second album, The Big Dream, is out now on Sacred Bones.