There is Always an Alternative to Riding a Bicycle. 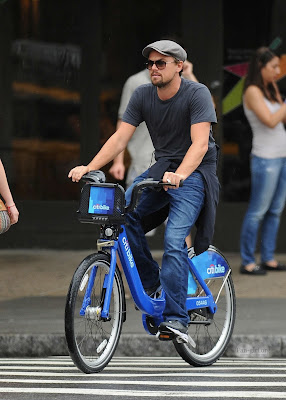 I own a bicycle. Sure. It's in my kitchen right now, and has been, in the same spot, for about a year. Sometimes I put a belt over the handle bars so I remember that I want to put it on after I take a shower. Sometimes I'll put a box on the seat of it so that I remember to take it out to the recycling bin. I definitely have a bike. I bought this particular bike because it has green wrapping around the handle bars. I was walking by a bike shop one day, saw the color green, my brain decided that I liked that, and then I gave a man $250. I named the bike Stevie Nicks. When I took the bike for a test drive before taking it home, I asked the lesbian who unlocked it for me "is this a good bike?" She was like, "Yeah, that's a good bike." I rode my bike over both the Williamsburg AND the Manhattan bridges exactly one time each. I rode my bike to and from work about a total of eight times. I concluded, after what I consider to be a lengthy and thorough experimentation with bike riding, that I would much rather walk, if not just take the subway, or better yet, a Taxi Cab.

There is a thing called Citi Bike here in NYC, that maybe you've heard of. A lot of people have written things about it. It's been on the news. I remember hearing something about these bikes when they were first talking about how maybe we'll have them here, and then all of sudden, one day, they were here. The first time I saw them was while walking around Central Park with my girlfriend. I saw the line of blue bikes and thought "huh. There's those bikes." Then I started seeing them everywhere. They're everywhere. From what I can gather, you walk up to one of these bikes, swipe your credit card, and then pedal away with it. When you're done, you take it to any Citi Bike docking station, and then your card gets charged for however long you were gone with the bike. I bet the charge is always wrong in some way. Right? What I wonder about these bikes is, so like you're sitting on it, and after it's been out in the world, on active duty for a few months, do you maybe look down to find that someone has scratched the words "fuck you, fucker" into the chrome with a key or the end of a pin? What I wonder most is, is there REALLY ever a time when you just absolutely MUST have access to a bicycle, with no other alternative? I don't think so. I can't think of that being the case.

Let's say that I went somewhere, to a thing, and it let out late at night. If it was late at night, I'd try to get a cab home, and probably get one in about 30 seconds. Maybe on this particular night I don't have an extra $20 to spend on a cab, so I decide to take the Subway, but the train I need to get home isn't running. Huh. So no way to take a cab, and no train. How about a bus? If there's no cab, no train, there's probably a bus. If there was no cab, no train, AND no bus, there would be rioting in the streets, and in that case I could smash the window of a nearby car and drive home with it, without being detected due to all the rioting. People would be distracted. They wouldn't notice me. There is literally nothing that would be happening to me that would cause me to take a deep breath and tell myself, "Well, this is it, guess we gotta take home one of those bikes and then return it the next morning."

The bikes don't come with helmets either. So think about that. And I guess Leonardo Dicaprio rides them? See that picture up there? He's smoking an e-cigarette while riding one, and he looks upset about it. He's exactly the sort of person who rides one of these bikes. Not me. I'll just walk. I would rather walk for six hours, any amount of distance, over any terrain, then ride one of these bikes. This aint France, people. You know?