Read A Book, Listen To A Record, Watch The Home Run Derby 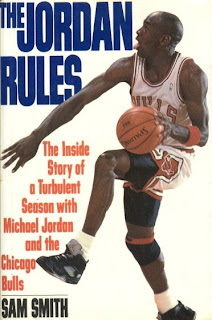 "The Jordan Rules" by Sam Smith


So I'm just now getting around to reading this seminal tome of sports journalism, and it's been as good as advertised, a relic of a bygone era when there was such a thing as media access to the actual inner workings of a professional team. Now we have tweets and apologies about tweets and fake "I was hacked" claims and publicity departments.

Smith is a decent writer with a good eye for oddball quotes. He tends to jump around a lot, allowing the stream of his story to pool and eddy and wind. This would be aggravating if the feeling of intimacy with the traditionally arms-length subject matter wasn't so riveting.

So far the best thing about the book has been the insight into the corpulent former Chicago Bulls general manager Jerry Krause, who for lack of a more appropriate term, was a Professional Fat Piece of Shit. The book opens on the NBA offseason in the summer of 1990, and features Krause eating poor Cliff Levingston alive for what amounted to a $200,000 difference of opinion on his contract. Krause also does things like ask Dan Majerle to fake an injury so the Bulls could draft him in the third round. Krause is the best. He's like a cross between Larry Flint and Baron Harkonnen.

As silly as a difference of $200,000 seems now, there's a lot of the same exact shit going on in terms of how basketball teams are run. There are stars who have to be cajoled into actually helping their own teams. There are (still, occasionally) savvy front offices who lock up their players to ridiculously cheap contracts which seem reasonable at the time but which are absolute bargains once a new television contract comes in and floods the league with money. There are still cheapskates who screw up in dealing for better players because they're infatuated with some European named, for example, Toni Kukoc.

What impresses me most about this book is how good it is that basketball is finally doing the whole Moneyball thing and using stats that actually measure how much a player helps their team win games. As much as I enjoy watching unabashed volume-scoring jackers like Monta Ellis, basketball is at its best and most exciting when two teams are playing the game as close to flawlessly as possible, within the flow and rhythm of a full-team concept. If we could get some stats to reflect one's ability to contribute to that and pay the right people the right amount to ensure a higher likelihood of that, that would be great for the game. 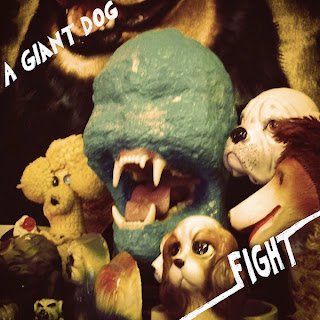 I can't decide how I feel about this band. There's something buried in here that I find interesting even though it has a lot going against it.

For one, there's the cover. This and their 2013 release Bone have this weird fanged monster thing on it that looks like something from a major label postgrunge one-hit wonder from the late 90's. Spacehog maybe. It's easy to picture that little fanged monster on a t-shirt in Spencer's Gifts alongside the Fall Out Boy and Tool tees.

Spacehog and the ilk is probably an apt musical comparison, because these A Giant Dog's male-female dual lead songs have a well-produced pop-leaning earwormish tendency with "who do you think you're fooling" lyrics that come off exactly like a lot of those old bands. Imagine PJ Harvey fronting The Fratellis. A Giant Dog sound at all times like something that's being rammed down your gullet from an external source not of your choosing, only you don't mind too much because they're way better than the other Spencer's Gift t-shirt bands.

What makes them a puzzling band is the fact that they're on Tic Tac Totally, a "one of the good guys" microlabel which if known for anything anywhere (this is a stretch) is known for writing vinyl release download card checks that their server can't cash. Which is, you know, kind of puck rock. Tic Tac Totally is one of those charmingly unprofessional labels for charmingly unprofessional bands. Quite frankly it makes no sense for a band like A Giant Dog to put out multiple releases on the label, unless Tic Tac Totally became a Warner Brothers subsidiary last year and nobody mentioned it. Not mentioning something like that would be in keeping with the standard pace of Tic Tac Totally publicity efforts.

If none of this sounds like it's exactly a ringing endorsement, that's because it isn't. I'm not really a huge A Giant Dog fan. But they're presenting me with something I can't quite figure out from a "good guys/bad guys" narrative standpoint, so I end up gawking at their career more than I ordinarily would if they were a merely technically proficient band with average songwriting. I'm not sure if that constitutes actual entertainment or not. I probably just need to leave the house.

I will say this: "Cleveland Steven" will get stuck in your head if you let it. Don't watch the video, though, unless you want Marilyn Manson flashbacks. 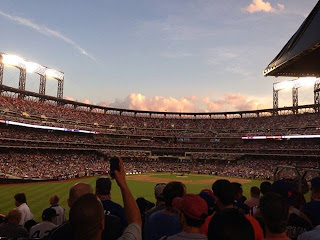 Last night a bunch of guys tried to hit baseballs as hard as they could. It took a long damn time and became increasingly boring as the event wore on. The end.

I wish they'd have an Ironic Home Run Derby. But no. Instead we get people who hit home runs hitting home runs. The best thing about hitting a towering home run in a game is that the pitcher is completely demoralized. With the derby there are no stakes. It's just smiling aw shucks millionaires being affably impressive.