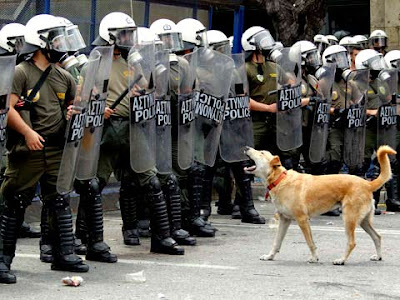 Have you noticed that conservatives are telling people that “dogs are next” a lot recently?

It first started with the recent gay marriage arguments over the DOMA case in the Supreme Court. You’ve heard these wackos. To paraphrase: “You can’t let gays marry! What’s next, a man and two women, or a man and a dog? DOGS ARE NEXT!!! Don’t let two dudes get married, because if you don’t stop it now and put your foot down, people are going to do the same thing to DOGS!!!! Where do you draw the line? BEFORE OR AFTER DOGS?”

At the time this was okay whatever, you guys are bonkers. If a bunch of dogs somehow became sentient and were able to make strong legal arguments for their right to marry under the guidelines set forth in the U.S. Constitution, I’d say let them go ahead and marry anydog they wanted. Is where you draw the line. If  instead of making strong legal arguments or, you know, utilizing language and cognition, you just sit around licking your own balls all day, then you… wait a minute.

According to a thing I read in the Washington Post today, human hemorrhoid Rush Limbaugh talked about the Washington Redskins football team on his radio show. I mention this to assue everybody that I would never listen to it. I just read a second-hand report about it. Even that is usually too much credit to give to Rush Limbaugh, but I can make an exception when he talks about my favorite football team.

As you might have guessed immediately upon seeing it even if you’re from another planet, the nickname “Redskins,” meant to refer to American Indians, is offensive. Pressure has been mounting recently, duh, for the team to change its name, duh, and pressure will continue until the name is changed because that’s how it works with good ideas. Team owner Dan Snyder (he’s another one) wants to keep it, and Rush Limbaugh agrees.

“And then the people who oppose it might posit an argument, ‘Well, you know, if you do that, where are you gonna stop? Are you gonna start saying you can’t name teams after animals next? Where is it gonna stop?’”

Okay, that’s a rhetorical trick he used where he didn’t say it, he said other people MIGHT say it. And then to fully contextualize the rest of what he said for some reason, he went on to say something else about how the government is deciding what’s right and what’s wrong, and how that’s dangerous or something. It doesn’t matter what he said or the point he was trying to make (I thought the idea of the U.S. Government was that it’s of the people by the people and for the people, and they, you know, decide things based on what the rest of us think because we’re the ones that make it, or something). What matters, to me and to what I’m saying right now, is that he introduced the “dogs are next” argument to this issue.

This is fucking weird, right, you guys? Anytime a conservative wants to take a stand on an issue they are very clearly wrong about, they say, “Well, where do you draw the line?” And then they ask, “What’s next? DOGS?”

It’s telling, not because it holds any water at all, but because THEY THOUGHT OF IT. Gays are like, “We want to get married because we’re people too!” And then conservatives are like, “Oh that reminds me. This is funny. What if a DOG demanded the same rights as you guys are currently demanding? We think this thought somehow illustrates how ridiculous you are currently acting.”

Native Americans are like “come on, you killed all of us and took our land illegally and THAT’S WHAT THIS COUNTRY IS, could you maybe also not call your billion dollar football teams the single most dismissive racial epithet you invented for us?” And the Rush Limbaugh response is, roughly, “I just had a whimsical thought about how somebody anywhere MIGHT make the argument that you also shouldn’t name your sports team after a particular DOG, ha ha ha, but seriously.”

Anyhow, if you are a gay, a woman, a minority (Hispanic or black or, like, anything but a white dude in a suit who listens to Journey) just know that a large and vocal enough block of political thought for you to have heard of multiple times in a month thinks of dogs whenever they think of you. By their own admission and invention. You, and all the human rights you might ever aspire to, remind them of dogs.  Ha ha ha. Look at that talking dog on the YouTube, he said “I love you,” isn’t that the damndest thing you ever saw. You know, dogs.

Well guess what, fuckheads. DOGS ARE NEXT. We’re all just waiting for the baby boomers to die off and then it’s DOGTOWN, USA.