The City of the Big Shoulders Is Shrugging 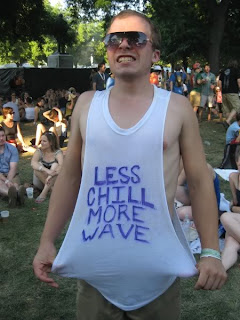 Well, you hear some amount of self-conscious grumbling every year. “Hipster” bingo. Cutoff jeans and Toms shoes with some kind of a promotional tank top from 1992 with a caricature of Larry Bird on it, neon green cheapo Ray Ban knockoffs, a straw hat of some kind, and multiple tattoos of birds. What kind of a person is that? What are they celebrating? What does that uniform mean? It means “I am coming to Chicago because of the Pitchfork Festival.” It means “skip brunch this weekend.”

You hear all that grumbling.

All that comes from people who are going to Pitchfork and want to establish some dividing line between themselves and everybody else who is going to Pitchfork. As if there is a “good guy” team and a “bad guy” team, and one’s membership in the good guy team must be proven through overabundant displays of self-awareness. “We’re not like those people who just rise up from the sidewalk and walk in the direction of the nearest crowd wearing whatever they think will help them get laid, man, we’re here for the music.” If that sounds like an exaggeration, count the number of times this weekend a Pitchfork-goer says the apology “I’m just here to see ________.” It’s as if going to the entire festival simply because you enjoy music and being outdoors is implicitly frowned upon as gauche, so excuses must be made. You know the attitude. You have it.

This is where the grumbling comes from. People are grumbling about themselves. “Can you believe us? We’re the worst.” Kelly McClure asked me to write about what it’s like to live in Chicago during Pitchfork weekend under the assumption that I’d say it’s awful. It is not awful. It is not anything. It’s no thing.

For most people in Chicago, Pitchfork is a barely perceptible reason why an unusually high volume of young people with stupid haircuts are pouring steadily out of the airports and train stations. Every year is the same. They emerge and generally cavort like they’re the opening credits of Laverne and Shirley and you’re just some fucking guy in a blue shirt on the way to work, and you go “oh yeah, Pitchfork.” It’s what young people do. It’s fine.

We don’t give a fuck, you guys. We’re not Austin. You’re not “turning this city upside down.” There are huge, huge swaths of land area in Chicago in which not one denizen knows about or cares about the Pitchfork Fest. Can you imagine that, you little shits? Can you even conceive of a reality (the actual reality) wherein you and your activities are not the central storyline of everybody else’s life? No, you probably can’t. Well it’s true. Nobody in Chicago gives a shit about you. We’ll take your money, sure, but that’s it.

You want to know what I’m worried about, like, a lot? I’m worried I’ll have some unforeseen reason to be in Wrigleyville (it’s the neighborhood near Wrigley Field)(where the Cubs play)(baseball, you fucking clod) tomorrow night, and it will slip my mind that fucking Pearl Jam is playing in fucking Wrigley Field and there will be 50,000 plus Pearl Jam fans in the streets while I’m there trying to renew the City Sticker for my car (we have cars here, sometimes). Can you imagine the stress nightmare come to life of being anywhere near there? Pearl Jam fans. Fans of the band Pearl Jam. Making their presence felt in every restaurant and bar for square miles. Doing whatever it is they do, I’m guessing drinking beer and being in touch with their feelings about their parents’ divorce while taking fucking FOREVER to parallel park.

Just, you know, 50,000 of the same kind of person converging somewhere where there are also other things. A friend of mine is doing a comedy show less than a block away from Wrigley Field that night. I want to go to it enough for me to almost forget about the whole Pearl Jam thing. I think about what I’m doing tomorrow night, and I have to remind myself not to go hang out with my friend because of Pearl Jam. Even so, I might forget. I might be dicking around at home and lose track of time and get kind of bored and go “what was I going to do tonight? Oh yeah, there’s that comedy thing,” and then find myself in my car driving towards cargo-shorted oblivion. You want awful? THAT is awful.

Pitchfork is at Union Park, at the intersection of Lake and Ashland. It’s a contained site. East of there is industrial buildings and shuttered-for-the-weekend union halls, north is the weird not-technically-Little-Italy-but-still-quite-Italian neighborhood that’s one of the areas in the city where if you’re ever walking around you hear the cawing of a single distant crow and turn to your date and say “let’s get out of here” because the houses have no yards and that old lady is looking at you, and south and west are the beginnings of those huge swaths of land where your little white boy indie pop music fan life and safety are not a concern for anybody, and will therefore through ancient evolutionary instinct send you scurrying back to the hive. Pitchfork is contained. You’re not ruining anything except for the “cool” businesses in the “cool” neighborhoods during the non-Festival hours of a weekend. Those places are all already ruined.

I’m not worried about you guys. I see you people every goddamn day. You look like nothing. I see you in my peripheral vision and it’s like “what’s that” and then I point my eyes at you and I go “oh, nothing” while you loudly explain something you once heard about Roman Coppola to your friends who are also nothing. You’re just people. You’re not a thing different from or better than or worse than people. You need to relax. I hope you actually enjoy yourselves at this Pitchfork thing instead of constantly worrying that you might be enjoying yourself more than might be cool, or that you might be placing a burden on the City of Chicago. You’re not. We’re good. Go ahead. Knock yourself out.

I’d be there too, but it’s going to be crowded and hot and there’s not going to be anywhere to sit and nobody gave me a free ticket.

@itisbenjo
Posted by Ben Johnson at 10:17 AM